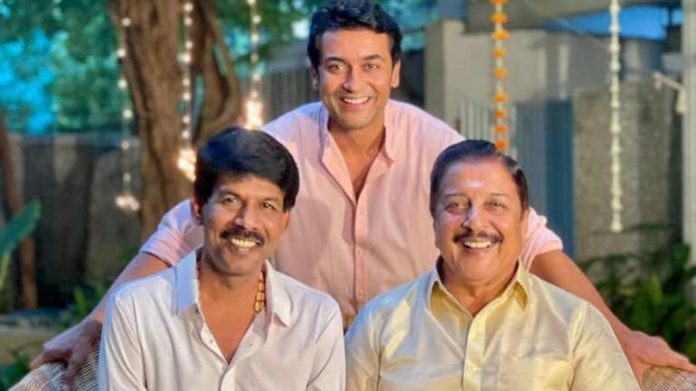 South star Suriya on Monday (March 28), basking in the success of ‘Jai Bhim’ and ‘Soorarai Pottru’, tweeted that he was commenced shooting for his next film with the National Award-winning director Bala. The film reportedly is a rural entertainer and is being bankrolled by Suriya’s own production house, 2D Entertainment.

Suriya’s next film will be with Sudha Kongara, who is currently in Mumbai shooting for the Hindi version of ‘Soorarai Pottru’.

Expressing his excitement to be teaming up with his ‘Nandha’ (2001) and ‘Pithamagan’ (2003) director, the 46-year-old Tamil star called Bala his mentor and said he has been waiting to hear action from him.

Been waiting for #DirBala na my mentor to say Action!!! …After 18 years, it’s happiness today…! This moment… we need all your wishes! #Suriya41 pic.twitter.com/TKwznuTu9c

“Been waiting for #DirBala na my mentor to say Action!!! After 18 years, its happiness today! This moment we need all your wishes! #Suriya41,” he said in a tweet.
The “Jai Bhim” actor will reportedly play a dual role in this film, while one character will be a normal one, the other is said to be deaf and dumb.

Also read: Kollywood raring to go: What next for Tamil superstars? Here’s a lowdown

Earlier, Suriya had said that Bala is the one who has more faith in him than even he does. “The one who introduced a new world to me. After 20 years, I am standing in front of him with the same enthusiasm. With the blessings of my father, I am excited about beginning a new journey with my dear brother, Bala. Requesting your love and support for my journey,” said Suriya.

Happy to be on board #Suriya41 @Suriya_offl sir #Directorbala sir @2D_ENTPVTLTD ❤️ Have been receiving many warm wishes since morning………feeling grateful, thank you so much 💝 pic.twitter.com/JD7y1vnpQO

Suriya and director Bala’s friendship go back a long time. Twenty years ago, it was director Bala’s ‘Nandha’, in which Suriya had played a gangster that gave the actor a much-needed break in his career. The major highlight of the film is its disturbing climax and it also marked Suriya’s first performance-oriented role. He had won the Tamil Nadu State Award for Best Actor for the film.

Bala’s other film with Suriya was ‘Pithamagan’, which was centred around two friends Chithan (Vikram), a socially outcast person and Sakthi (Suriya), a conman and how their lives change after a series of events. ‘Pithamagan’ became a profitable venture at the box-office and was remade in several languages and it was considered to be one of Suriya’s best performances.

There is a lot riding on this new venture with Suriya for director Bala, who has had a string of flops to his name recently. ‘Tharai Thapattai’ and ‘Avan Ivan’, the last two projects of Bala, didn’t live up to expectations. The movie ‘Nachiyar’, which starred Jyotika, was a moderate success.