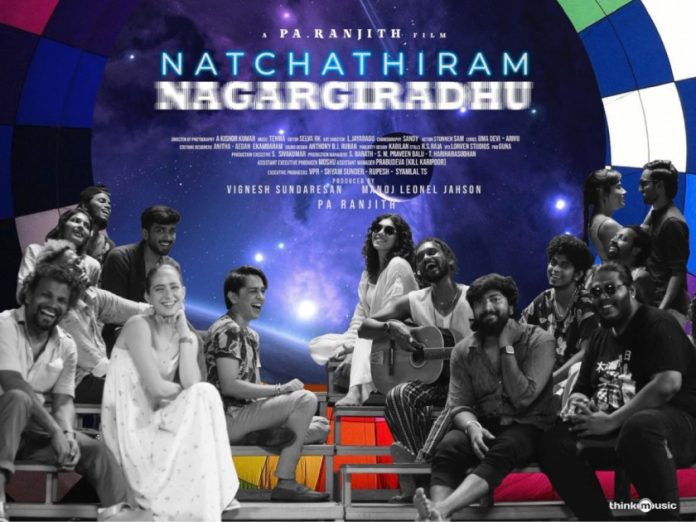 Natchathiram Nagargiradhu is not just a typical romantic film with two young charming actors who fall in love, break up for a silly reason, and patch up in the climax

Filmmakers have predictably shown relationship woes happen due to conflicts between two individuals or between two families but what makes director Pa Ranjith’s latest film, Natchathiram Nagargiradhu, stand out is that he manages to effectively convey the underlying politics behind love in our society.

What makes Natchathiram Nagargiradhu more special is that Pa Rajnith, one of the unique voices of Indian cinema, hasn’t talked only about the man-woman relationship in the film and about caste conflicts. He also delves into LGBT relationships and questions male chauvinism.

The opening scene of Natchathiram Nagargirathu features Iniyan (Kalidas Jayaram) and Renne (the impeccable Dushara Vijayan) leisurely lying on their bed and immersed in their own thoughts. Renee says she wants to get married, and then immediately changes her mind claiming she doesn’t want to marry. Iniyan sheepishly accepts her decision. The tension slowly builds up between them as Renne raves about Ilaiyaraaja and sings her favourite song just as Iniyan is trying to sleep.

While Iniyan and the audience just see the argument, which seems to be all about her free-spirited, bold nature and his indifference, Renee sees Ilaiyaraaja as a political statement. She even brings up the point that the composer had broken all barriers (including caste) and is dominating the music scene. The argument between them slowly shifts to Renee’s real name Tamizh and in the heat of the moment, Iniyan accuses her of indulging in nonsense because of her lower caste mentality. This particular word hurts her so deeply and the argument leads to a physical tussle. Eventually, they break up!

Also read: Karthi speaks on Viruman, Ponniyin Selvan, and why he could not do Vikram

Later, we get to know that Iniyan and Renee are a part of a theatre group preparing for a stage production in Puducherry. The group comprises people from different walks of life, including gay couples, a transwoman who is in a relationship with a man, and a middle-aged man who tries to win the heart of a young French girl. Then, Pa Ranjith introduces Arjun (Kalaiyarasan), a conservative, small-town person, who talks highly about his caste and cultural values. He is nothing but the mirror image of Indian society.

Arjun cannot gel with the other members of the group, as his ideology completely differs from the rest. But slowly, Arjun’s mindset starts to change after his interactions with his actors, particularly Renee and he also changes the rebel ending of his team’s stage play with a positive climax!

The film is filled with many positive takeaways. Ranjith has shown that people can set aside our bigoted views and fall in love only based on attraction. And, not because of some century-old man-made structure that has divided us in the name of gender, religion, caste, etc.

While Ranjith’s previous works like Madras, Sarpatta Parambarai, Kabali, and Kaala had all the elements required for an Indian film, this time, the filmmaker has completely surprised us with his execution. The look and feel, the core plot, characterisations, music, visuals, and editing pattern are on par with any other world-class film.

Yes, Ranjith talks about caste discrimination and the pain of the oppressed here too. The 39-year-old director does that through Renne, who refers to herself as a broken mirror, who cracks with every little insult that had been thrown at her right from her childhood because of her caste. And, that is the reason she prefers to stay strong and bold. The entire episode is a classic example of Ranjith’s brilliant and powerful writing. But as a filmmaker, he has evolved to a different level in this film, Natchathiram Nagargiradhu is easily his best work till date.

For a section of the audience, Natchathiram Nagargiradhu may be a dialogue-heavy dry film (close to 170 minutes runtime) but Ranjith holds our interest with his bold point of view on so many topics. The film will surely spark strong debates in our society.

Dushara Vijayan hits it out of the park with her intense and impeccable performance, she will definitely bag many awards next year for her brilliant work. While we think that Kalidass will have more scope to perform and Kaliyarasan is there just to play a light-hearted comical part, Ranjith adds a surprise twist with their characterisations.

While Kalidas shows so much promise in the initial set of scenes, Kalaiyarasan steals the show at the point of intermission and the subsequent scenes in the film till the climax. For Kalaiyarasan, Arjun is the best role ever since Anbu from Madras.

Kalidas has also delivered a measured performance. Shabeer Kallarakkal, who comes like an evil Joker-like character in the climax, is another interesting character in the film. As pointed out earlier, Natchathiram Nagargirathu’s technical team also needs to be commended for their phenomenal work. Cinematographer Kishor Kumar’s colour tone, angles, and the way he captures the emotions in the stage plays and in the other scenes are unique yet captivating. Tenma’s music is nothing that we haven’t heard before but very effective, while Selva’s editing style is also distinctive.

Overall, Natchathiram Nagargiradhu is not just your typical romantic film with two young charming actors who fall in love, break up for a silly reason, and patch up in the climax. Surely, the audience too will witness a change in their view on love and politics after watching this film.