After fans of Kollywood actor Vijay tweeted a graphic illustration depicting how the crew of his upcoming movie Master would be in quarantine, actor Malavika Mohanan, who too is a part of the film’s cast, on April 26 slammed it for being ‘sexist’. However, after receiving snarky comments from some users, she has deleted the tweet. 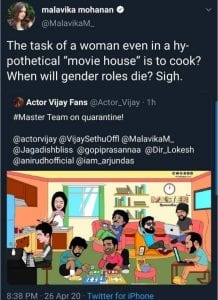 The illustration showed Malavika — the only female member — cooking in a corner of a room, while Vijay listening to a song, actor Vijay Sethupathi playing ludo and composer Anirudh Ravichander playing the piano. Other crew members, including director Lokesh Kanagaraj, are seen using a laptop or a smartphone.

Reacting to the tweet, Malavika posted, “The task of a woman even in a hypothetical ‘movie house’ is to cook? When will gender roles die? Sigh.” However, within a few minutes after she tweeted it, scores of persons attacked the actor. Some men even went on to say it suited her perfectly. This left Malavika deleting the tweet.

Later a Twitter user, named AG (@arunrp555), posted another version of the illustration, altering it by placing a book in Malavika’s hand, instead of a spoon. The actor retweeted it and said she loved this version. “And how did you know I love reading?!” she added in the tweet.

Okay i fix it for you @MalavikaM_ , Happy Reading !!

Master, starring other actors like Andrea Jeremiah, Shanthanu Bhagyaraj and Nassar was scheduled to be released on April 9. However, due to the nationwide COVID-19 lockdown, it did not hit the screens.

Nine products from J-K, Ladakh in line for GI...