Even after his four-decade engagement with the visual medium, true to his idea of the neo-classical, realist, and humanist approach to cinema, film auteur Girish Kasaravalli still steadfastly strives to hold a mirror to the harsh realities of our times.

Kasaravalli, who turned 71 on December 4, looked elated, as his 14th feature film Illiralaare Allige Hogalaare (Unable to Stay Here… Can’t go There), which was recently screened in the competitive section of Asiatica Film Festival in Rome, will represent India at the Asian Film Festival in Dhaka, Bangladesh, on January 16, 2021.

Illiralare Allige Hogalaare, is titled after a line from a song of the great saint from Bhakti tradition – Purandara Dasa. The line also speaks about seeking comforts from today’s life journey.

This film was screened in 12th edition of Bengaluru International Film Festival (BIFFes) held in February 2020 and received critical appreciation from all the quarters, especially from international delegates.

Kasaravalli is eager to show his latest film to the native public, as it is more relevant today than before because of COVID-19 induced migration. He delineates the rural-urban migration in his signature meditative and self-restraint style and presents a critical picture of rural-urban migration that set about in the early 70s.

From Avasesh, his Diploma film at Film and Television Institute of India (FTII), which secured him the President’s Silver Lotus award for the best experimental short film, to Illiralaare, Kasaravalli – flagbearer of Kannada’s alternative has travelled the distance.

Avasesh was in fact a precursor to how Kasaravalli would change the course and fashion Kannada cinema in the way of Satyajit Ray, Shyam Benegal, Mrinal Sen, Ritwik Ghat, Jahnu Barua. 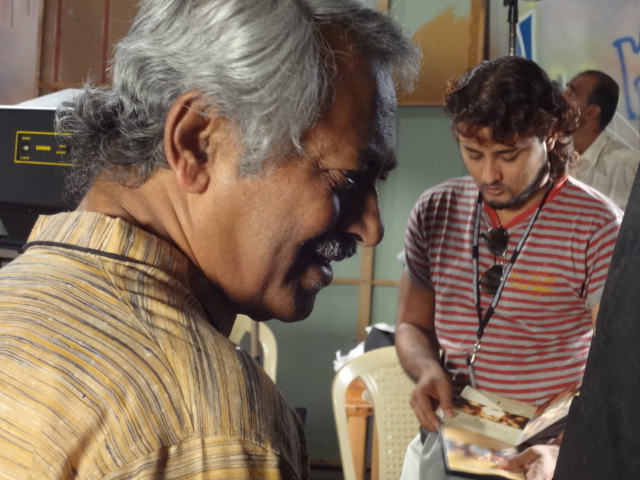 His films too would be the talk of the global cinema marquee and art house circuit and a film festival must. Kasaravalli became the beacon holder for the other cinema in Kannada, where aesthetics and craft dominate the narrative even as it sought to realistically portray social issues that were rending the society apart, where most of all, women were the hapless victims of such violence and societal sanctions.

Kasaravalli, who just completed 71, and underwent a bypass surgery, has been ploughing a lone furrow, in the 40-odd years and he has taken to cinema as a medium to explore and examine the changing socio-political-cultural realities of the times we live in.

Illiralaare is septuagenarian’s latest cinematic visitation, after a hiatus of nine long years. He is singularly capturing the cataclysmic changes around us through his cinema and can rightly be described as a living legend of Kannada cinema, and India, in his own right.

From Ghatashraddha to his last oeuvre Illiralaare, women have played a key component in the lexicon of Kasaravalli’s rumination on life, people, and society, though the delineations were as diverse as social ostracism to urban angst to modernity and invasion of globalisation all affecting the daily lives of people, especially of women, who were pivotal to Kasaravalli’s portrayals, be it Nagi in Dweepa, or Gulabi in Gulabi Talkies, or Thayi Saheba, or Geeta in Mane, Rangajji in Kraurya, or Hasina. Of course, Kasaravalli delineated into other terrains of social ills as well in Tabarana Kathe, Kansemba Kudrreneyari, Kubi Matthu Iyala, Bannada Vesha, Koormavatara and Illiralare Allige Hogalaare.

Kasaravalli has tried his hand in the documentary genre too. He has made few documentaries including Voyage in Images on the painter K.K. Hebbar, Mrityunjaya on Navodaya Kannada writer Niranjana. Ananthamurthy… Not a biography …But a hypothesis on Jnanapeet winner Kannada writer U.R Ananthamurthy. Images/Reflections, A journey into the imagery of Adoor Gopalakrishnan. He has made a four-part TV serial on Kagodu Satyagraha – the first peasant upraise of Karnataka and Grihabhanga – a 75-episode weekend TV serial based on Kannada’s renowned novelist S.L. Bhyrappa.

Mere 14 feature films in a four-decade career? Is it enough for a filmmaker of Kasaravalli’s stature? Kasaravalli is a voracious reader, his understanding and insights into Kannada literature is something unique. He found his kind of imageries in the works of Ananthamurthy’s short story Prashne, Siddartha and Mukhamukhi of Yashavanta Chittala. He even scripted Bharatipura of Ananthamurthy with an intention of making that into a film. He could not do it for various reasons.

He wrote script and dialogue for Kubi Mattu Iyala, based on the short story of Purnachandra Tejaswi that was filmed by Sadananda Suvarna. He is the scriptwriter for K. Shivarudraiah’s recent film Ramana Savari based on a story by K Sadashiva. Kasaravalli was keen on making a film based on prominent women writers of 70s –Triveni’s work – Avala Mane. He worked hard to script the works of Raghavendra Khasanisa, one of the finest and sensitive minds in Kannada literature. His works Tabbaligalu, Mandiya Rahasya impressed Kasaravalli a lot. Had Kasaravalli believed in numbers, he would have made another 10 more films in his career.

His latest film Illiralaare speaks of displacement and disillusion that comes in its wake of up-rootedness from one’s moorings and familiar surroundings, based on Haalina Meese, a short story by Kannada writer Jayant Kaikini.

For Kasaravalli, “it is a film about alienation”, a common theme in many of his visual works. The film delineates the complexities of migration, which is a universal phenomenon. The plight of people in the present socio-economic circumstances is being dealt from all human angles. Though the short story by Jayant is set in late 90s society, the subject is more relevant for now than before.

Of course creating a perfect backdrop of a quiet caste-plagued village with a brahminical family as the pivotal point is not new to Kasaravalli. Illiralaare is a quintessential setting, which Kasaravalli passionately engaged with in classics Ghatashraddha, Nayi Neralu, Thayi Saheba, and Dweepa. The film again brings to the fore the Kasaravalli’s typical finesse in making visuals speak than the words. He divides the time frame in the narrative to present the picture pre-post liberal Indian society.

The three decades time difference in time frame facilitates him in questioning the quintessential changes by globalisation and liberalisation. He dispassionately and critically looks at the idea of urbanscape as a domain of equal opportunities free from caste and class-based inequity and marital status. He pins down both urban and rural scape by raising critical questions that remain unanswered. This treatment of text forces the audience to introspect whether the depressed and disadvantaged class has any place to live with dignity? However, Kasaravalli refuses to provide an optimistic picture, as it is not his style of making.

“Migration from village to cities had begun in the 70s and this rural-urban migration was the only alternative to people like Naaga and Seetha (characters in Illiralaare). In a way, we are all in the situation of Naaga. It is not a story of one person, but a narrative of millions of thousands, who have migrated from rural to urban landscape to build the life of their own for decades,” says Kasaravalli.

He adds, “Migration has been a universal phenomenon since ages. While one may leave their roots in search of better livelihood, the angst and anxiety to return and find solace and security in the safety of one’s own environment is ever present. However, for some, returning also means having to forego what they possessed, which keeps gnawing in their mind. Trapped in this dilemma of staying and inability to return, they are caught in a perpetual state of unhappy turmoil. Capturing this quintessential pulls and pressures of man’s relationship with his situation is the grand narrative of Illiralaare Allige Hogalaare.”

It appears like the author of his first venture Ghatashraddha – Ananthamurthy, Kasaravalli is passionate about setting brahminical characters in his works against doctrines and traditionalism. Illiralaare is no exception to this. It is the story of everyone, who seeks comfort in their life journey and their dilemma in search of that. Characters in this film protests to seek their identity.

However, trying to get unshackled from Illiralaare Allige Hogalaare, Kasaravalli is already thinking about his next venture, which in all likelihood will commence next year.

(Muralidhara Khajane is a senior journalist, writer and translator specialising on cinema and culture)