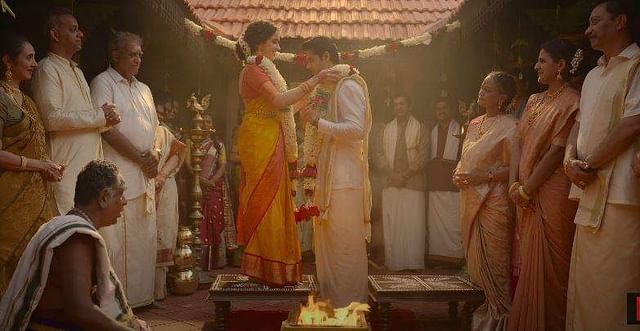 The film is set to release on Netflix on November 5.

“Set in Madurai, Tamil Nadu, the romantic comedy speaks to the trials and tribulations of a young couple, Meenakshi and Sundareshwar,” a press release said.

The teaser of the film, starring actors Sanya Malhotra and Abhimanyu Dassani, has already drawn a lot of flak on social media, with responses ranging from “All Tamil’s are not veg eaters”, to others calling out the lack of research in making of the film, to one user saying “please just leave us alone”, to another tweeting: “Another bollywood film to stereotype south indians as vegetarian, folk song listening, Rajinikanth loving, pretentious English speaking people. Grow up guys!”

I dont know when will bollywood understand that all Tamil’s are not brahmins. All Tamil’s are not veg eaters. Even brahmins wont dress and talk like this now a days. And not all tamil songs are folk songs. And stop ur obsession with our superstar!#MeenakshiSundareshwar https://t.co/oSMamGPhO1

Insert Tamil songs, Tamil icons and Tamil culture (grossly stereotyped) to get some eyeballs, but the characters only speak in Hindi!! Chennai is just 2 hours away by flight from Bombay, one visit would have made the makers realise what an atrocity this is #MeenakshiSundareshwar https://t.co/yl4qiyG9cA

Amongst all things that gets misinterpreted in Bollywood movies, Tamil representations got to be right up there. #MeenakshiSundareshwar

The film will mark the directorial debut of Vivek Soni, who had earlier made the 2012 short Bawdi, and is set to release on November 5.

It will also be the digital debut of Dassani, who featured in the critically-acclaimed 2019 comedy-drama Mard Ko Dard Nahi Hota.

“What’s in a name? My wife Meenakshi and I can assure you – a lot. ‘Meenakshi Sundareshwar’, coming soon to Netflix,” Dassani tweeted, sharing the first look of the film.

Malhotra, who was recently seen in Ludo which premiered on Netflix, also shared a still where the duo is dressed as bride and groom. “You are cordially invited to Meenakshi and Sundareshwar’s wedding. Send gifts and long-distance relationship tips!” the Dangal actor wrote.