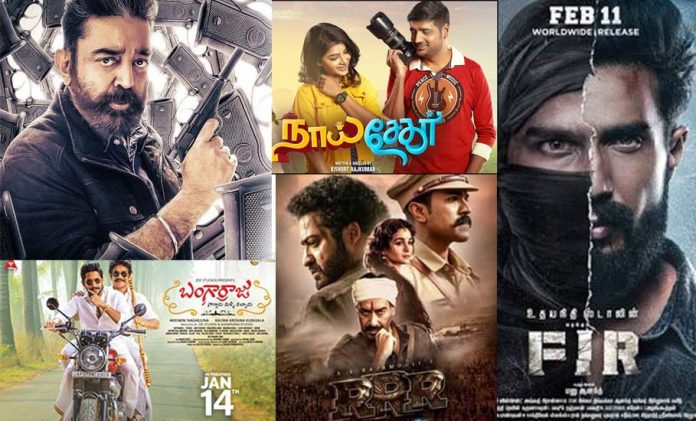 It’s July, and it’s time to take stock of the half-yearly box-office numbers in the South.

After the forgettable two years at the box office due to the havoc created by the pandemic, 2022’s first half has undoubtedly brought some joy to the Tamil film industry. Though the success ratio of small and medium budget films is not encouraging, films headlined by big stars have managed to draw huge crowds.

Generally, Pongal used to be the biggest money-spinning weekend for the Tamil film industry,  but 2022 turned out to be a dud with negligible box-office collections. Though Carbon, Kombu Vatcha Singamada, Naai Sekar, Enna Solla Pogiriai, and Theal were released for the Pongal holidays, trade trackers say only comedian Sathish’s Naai Sekar managed to collect more than ₹1 crore distributor share to become the only film that raked in profits for the producers (and this includes revenues from satellite and digital rights).

The first big hit of the year — ‘FIR’

The first big theatrical hit of 2022 is Vishnu Vishal’s FIR, the spy action thriller, which managed to collect more than ₹11 crore gross and above ₹6 crore share. This emerged as the biggest earner for the actor in his entire career. While M Manikandan’s Kadaisi Vivasayi was celebrated by critics and movie buffs, it couldn’t mint big money at the box office.

Ajith Kumar’s most-anticipated action drama, Valimai, earned a distributor share of around ₹57 crore rupees in Tamil Nadu, as per trade analysts. The film opened with mixed reviews and on top of it, the release week was also generally known to be the dry season in Tamil Nadu. Despite all the odds, Valimai‘s box office numbers tell us that the actor’s fan base is unshakeable in Tamil Nadu. On the other hand, Valimai couldn’t score big in overseas territories, Kerala and Andhra Pradesh.

Not Suriya and Dulquer’s year

Dulquer Salmaan’s dubbed film Kurup in 2021 collected more than his new Tamil film, Hey Sinamika, which was a commercial failure. For Suriya, despite getting decent to good reviews, Etharkkum Thunindhavan wasn’t his best and he had to settle for an average collection in Tamil Nadu. The Suriya-starrer also underperformed outside his home turf.

While Tamil films did miserably at the box office, Rajamouli’s magnum opus RRR gave relief to movie distributors and exhibitors. The film’s Tamil version yielded a share of ₹39 crore for distributors, providing the much-needed cash flow at the box office in the super-dry March.

Most of the earlier April releases like Manmadha Leelai, Selfie, and Idiot failed to draw audiences to theatres but Vijay’s Beast and Yash’s KGF (Tamil version) generated huge revenue at the box office. However, the former fell short of the expected numbers.

Trade reports say that actor Vijay’s Beast has generated a distributor share of ₹61 crore at the Tamil Nadu box office, fewer than expected. On a positive note, the film did well in Karnataka and overseas territories. But the numbers in Kerala and the Telugu states were a let-down.

The surprise package of 2022 is KGF’s monstrous performance in Tamil Nadu. The film collected around ₹59 crore share in the state (for distributors) and dominated even over Vijay’s Beast from the sixth day till the final run.

The other box office hit of April is Kaathuvakula Rendu Kaadhal,  with the film minting a share of ₹17 crore in Tamil Nadu. The combination of Vijay Sethupathi, Nayanthara, and Samantha along with Anirudh’s music helped the film pocket big returns at the ticket window.

‘Don’ and ‘Nenjuku Needhi’ are the winners of May

The pattern that started in January continued on in May with none of the small films scoring well at the box office. Only a few medium-budget films brought some revenue and May is not an exception. Sivakarthikeyan, who delivered a solid blockbuster in 2021, with his satirical comedy, Doctor, hit it out of the park yet again with Don. The film collected more than ₹117 crore (gross) worldwide and in Tamil Nadu, with a share of ₹40 crore.

Udhayanidhi Stalin’s Nenjuku Needhi garnered around ₹6 crore share in Tamil Nadu with the trade declared it a hit at the box office.

‘Vikram’ is the new industry hit

The film surpassed all other Tamil films released so far in Tamil Nadu by crossing more than ₹80 crore share in the state. Worldwide, Vikram has crossed more than ₹400 crore at the box office. Only RJ Balaji’s Veetla Vishesham (with Rs 4 crore share) managed to withstand the Vikram tsunami.

Vijay Sethupathi’s Maamanithan and other films that were released by the end of the month were taken off from theatres within the first weekend itself.

SS Rajamouli’s RRR turned out to be yet another ₹1,000 crore grosser in the Telugu film industry. The film collected more than ₹1,150 crore worldwide, with the Telugu industry stamping its box-office prowess, even ahead of Bollywood.

Though Pawan Kalyan’s Bheemla Nayak collected around ₹160 crore, the film is just an average venture at the box office due to the exorbitant budget.

Mahesh Babu’s much-hyped Sarkaru Vaari Paata also collected more than ₹110 crore but ended up as a loss venture for buyers. Baahubali star Prabhas’ Radhe Shyam couldn’t even collect more than ₹85 crore in the Telugu states and ended up as a disaster at the box office.

Another shocking failure in the Telugu film industry this year is Chiranjeevi and Ram Charan’s Acharya, with the film failing to cross ₹100 crore at the box office — a massive failure. Nani’s Ante Sundarinikki is another well-marketed Telugu film that collected below its potential. The film only collected around ₹25 crore (gross) in the Telugu states.

If there is one film that made everyone in India talk about the Kannada film industry, it’s Prashant Neel’s KGF: Chapter 2, starring Yash. Before release, everyone thought that KGF: Chapter 2 would not break RRR‘s record but post-release, the tables turned.

KGF: Chapter 2 collected more than 1,200 crore at the box office. In Karnataka, the film grossed more than 185 crore, a new record in the Sandalwood. The film is a blockbuster in Kannada, Malayalam, Hindi, Telugu, and Malayalam.

Besides KGF: Chapter 2, the other Kannada film that made some noise this year is 777 Charlie. In Karanataka, the Rakshit Shetty-starrer grossed more than Rs 50 crore.

The Amal Neerad-directed Mammootty film set the box office on fire by collecting over Rs 60 crore. Also, it turned out to be one of the biggest hits of Mammootty.