For decades these magic words have been swaying the hearts of millions of women around the world.

Armed with his charming looks and ready wit, secret agent 007 has been driving around in his favourite Bentley in a fitted black suit with the famous Bond theme playing in the background.

The character, created by Ian Fleming, a former Naval officer, was supposed to be Commander James Bond of the Royal Navy. He was originally planned to be tall, handsome, dapper, classy and witty. In Fleming’s idea, 007 was everything women could dream of —athletic, suave and skilled at unarmed combat. Since 1962, with seven actors playing the role, Bond’s character has undergone major changes, but his cult has remained the same. 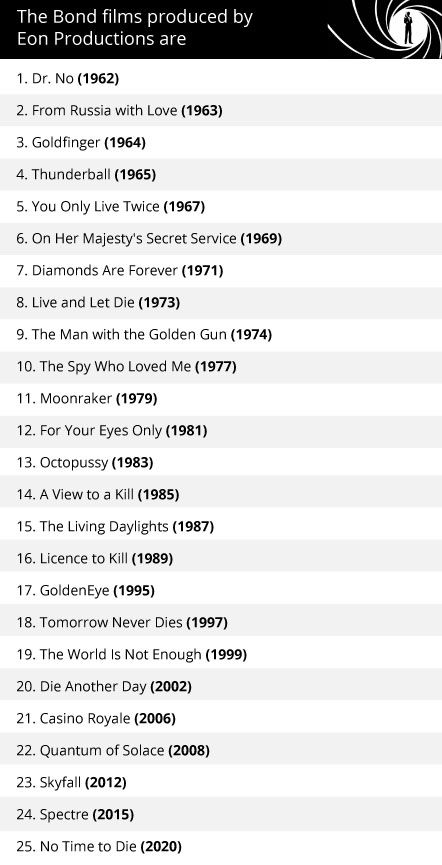 Ian Fleming’s was an intelligence officer in the Royal Navy during World War II. The name ‘Bond’ was derived from that of an American ornithologist, whereas the code number 007 was introduced from the Zimmermann Telegram 0075. These were secret German documents cracked and read by the British. This was one of British naval intelligence’s key achievements of World War I.

Those days if any file was prefixed with double 0s, it meant the document was top secret. And so was Bond’s identity.

In ‘Dr. No’, Sean Connery is outright sexist. For him, women are either an eye candy or a trophy. Since 2002, following the rise of feminist movements around the world, the portrayal of women changed for the better and is improving with each movie.

There has been a re-evaluation of gender dynamics in Bond movies. This meant moving away from his original characterisation where he is shown as having so much power over women as needed to save the world.

The gold-painted death of Jill Masterson played by Shirley Eaton in Goldfinger was perhaps one of the earliest ideas of objectifying women in films.

Daniel Craig speaking at the launch of Bond’s 25th movie No Time to Die has promised that the film would reflect changing attitudes. He recognized Bond as a “flawed” character with “issues… worth exploring and grappling with.”

Dapper look in a well-fitted black tuxedo is what one imagines Bond is all about. However, with the entry of Pierce Brosnan as James Bond, sweating it out in style became the new cool.

Adjusting tie and suit cuff even during the most intense fight scenes was started by Sean Connery in From Russia With Love (1963) and was carried forward by his successors. From George Lazenby, Roger Moore, Timothy Dalton to Pierce Brosnan and now Daniel Craig, all of them have paid attention to this department.

In The Man with the Golden Gun (1974), when Bond sees a lookalike mannequin wearing the same cream shirt and black trousers as him, he realises that he isn’t wearing his beautiful jet black tux. He steals the jacket to complete his look. He quickly poses as the dummy adding a silk tie to the look to get himself out of a difficult situation.

In The Living Daylights (1987), James Bond arrives for a concert wearing a shawl-collared dinner suit. Agent Sanders scolds Bond saying, “This is a mission not a fancy dress ball”. Little did he know that Bond was dressed for both work and play. When Bond and Sanders arrive at the location to protect Soviet defector Georgi Koskov, Bond flips his collar up and velcroes it so well that the bright white shirt underneath is completely hidden. Only James Bond can have such a cool dinner jacket that could turn into a tactical gear.

When Bond is introduced in Dr. No (1962) he uses the iconic lines “Bond… James Bond”. He wears a silky black suit with a black tie and since then it has been James Bond’s uniform.

Sean Connery and Daniel Craig carry James Bond’s fetish for three-piece suits superbly. Connery’s charcoal-coloured suit in Goldfinger (1964) makes his entry a big deal. Craig brings back the magic via his navy blue striped tux which he wears in the final scene of Casino Royale (2006) standing confidently with a machine gun.

Interestingly, both the scenes and the looks were a result of criticism and judgments from women viewers, which made the Bonds change their look.

Bond’s fetish for gadgets and his atrocious use of technology is well known. Over the years, Bonds have also toned down a lot. Now gadgetry is used more sensibly and realistically.

The era of bullet shooting briefcases, watches with time-bombs or underwater cameras is gone. Even his favourite Bentley and Aston Martin, fully equipped with fight and flight mode to win in any situation, is now more realistic.

A new Bond in the making

Bond music has always been grand and orchestral, though now many pop versions have come out making their on and off appearances in the movies. The original pulse of the musical ripples, however, remains intact.

In the 24 movies so far, Bond has always been portrayed as a tough hero making him a godly figure. But now he likely to be more humane like any other strong man. He could have even failed plans and could look like a loser.

The original Bond was a racist, sexist, homophobic, non-stop smoker. Now, he is expected to be transformed into a gentleman secret service agent.

Among fans, excitement over Bond 25 is on the rise. It would be good to see how the movie portrays James Bond’s character changing the way we knew him.

From e-com to building homes and more, an all-woman team in Kerala i...