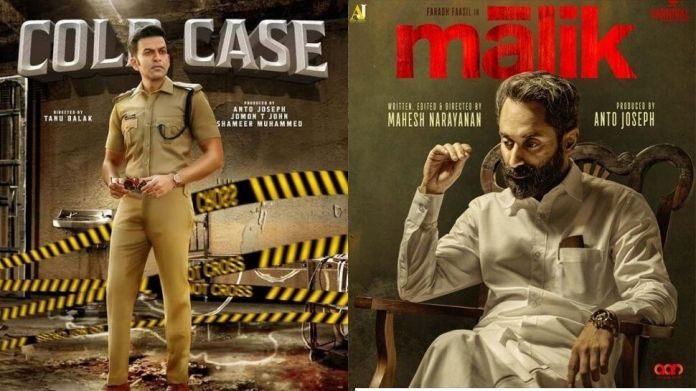 With no sign of cinema theatres opening anytime soon, big-ticket Malayalam films like Fahadh Faasil’s Malik and Prithviraj Sukumaran’s Cold Case too will skip theatres and head for an OTT release.

Media reports said that producer Anto Joseph has written to the Film Exhibitors United Organisation of Kerala (FEUOK) president K. Vijayakumar stating that he had waited for a long time to release these two films helmed by Kerala’s biggest stars – Fahadh Faasil and Prithviraj Sukumaran. However, since there is “no clarity” when theatres will reopen and “given the existing economic hurdles”, the producer has revealed that he is trying for an OTT release. However, he did not reveal which platform he has signed on to release the films.

According to Joseph, Malik, directed by Mahesh Narayanan, was scheduled to release in theatres alongside Mohanlal’s national award-winning Marakkar: Arabikadalinte Simham on May 13. But theatres shut down in the second wave of the pandemic.

Joseph said that he’s facing a financial crunch, and these films could only recover their production costs if 100 per cent occupancy is allowed. And, since there was no clarity on when the theatres will reopen and given the existing economic hurdles, he was trying for an OTT release for these films, he added.

An official announcement regarding Malik and Cold Case‘s release date will be out soon, said an India Today report.

Malik, an edgy political thriller, is a mega-budget film. The trailer of the film was released recently. In this film, Faasil, who had received rave reviews for his latest OTT release, Joji, plays the role of a charismatic leader, Sulaiman. He commands unconditional loyalty from the people in his community and leads a revolution against the authoritative forces that try to displace people.

Cold Case stars Prithviraj Sukumaran and Aditi Balan in lead roles and is an investigative thriller directed by cinematographer Tanu Balak. Set in Thiruvananthapuram, Prithviraj will essay the role of a cop named Sathyajith.

9:05 PM, 5 February, 2023 0
The explosion took place near a checkpoint in Quetta of Pakistan’s Balochistan province; at least five people are reported to be injured