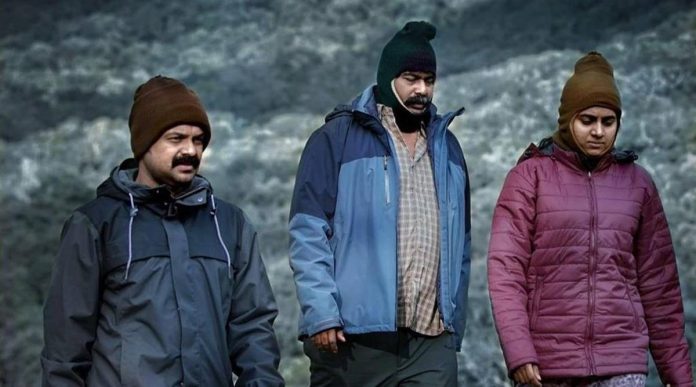 To make a film talk even in the midst of a raging pandemic is no easy task. Nayattu, now streaming on Netflix after being taken off big screens in Kerala following the deadly second wave of the COVID outbreak, is just doing that — or even more. Encomiums are pouring, so are heated, animated discussions about its politics too. Directed by Martin Prakkat, the flick has Kunchacko Boban, Joju George and Nimisha Sajayan playing the lead.

Far from all the limelight, Shahi Kabir, the writer of Nayattu, is busy with the construction of his new home in Kerala’s Alappuzha. For the record, Kabir is a police officer (in Kottayam) who has taken a sabbatical to take a plunge into films. Kabir broke into Malayalam cinema in 2018, with Joseph, a taut medical thriller, with a retired police officer calling the shots, that had Kerala hooked. Another police story now, and how!

In a long conversation with The Federal, Kabir, quite reluctant to speak though, opens up.

Nayattu has been widely lapped up across languages and regions, but what was unexpected was the backlash at home (in Kerala) with the film being dubbed by some as “anti-Dalit”. Or was it expected?

To be frank, we never expected this kind of overwhelming feedback for the film from anywhere. Perhaps because of the wider reach Netflix offers, the response has been humungous. Even in Kerala, the film evoked terrific response (including the industry), especially after its online release. Probably, nobody expected the film to be the thriller it turned out to be. Nevertheless, these are little dollops of happiness for all of us despite all the gloom around.  On readings or interpretations in some quarters about the film being “anti-Dalit”, all I can say is that the film is “not anti-anything or anybody”, it’s about human characters and how people behave or respond in/to particular situations. It’s not pro-something either. All I am trying to say is that it’s about human behaviour, and not just about anyone’s identity — Dalit or not. In the second half too, the issue gets hijacked by politicians, and they go on a rampage, indulging in violence, orchestrating bandhs and protests.  And the bypoll, a humdinger of sorts, makes things murkier. The political system (again, not all politicians), operates on a different level altogether which you and I can’t probably imagine. Having said all that, everyone has the right to analyse or even interpret a piece of work, and I respect that.

In hindsight, do you believe Dalits in the film could have been replaced with any other community/caste/religion?

The film is all about a posse of policemen and their ordeal. Everything else, including the political developments, is a tool to take the story forward. To answer your query, the answer is no. If it weren’t for the Dalits, the issue would have got a silent burial even before it was brought to the police station itself.

If we say the film’s political developments are a bit exaggerated — be it the bypoll frenzy, Kerala on tenterhooks, or even the Dalit uprising (or any community) on a poll day — would you agree? Also, is there a constituency in Kerala which has 50,000 Dalit votes and where they vote en masse to influence an electoral outcome?

As I said earlier, these political developments should be taken as a tool. To make the subject more appealing and thrilling, you need cinematic elements to whichever extent you try to shoot realistically. So looking back, I agree some of the stuff could have been avoided, particularly “the 50,000” votes you have mentioned.  Ideally, it should have been 5,000 votes or so, and I agree it’s a mistake, rather a slip-up, on my part. Look what a difference a zero can make. (chuckles).  All that matters is the story, let me remind you.

Dwelling on the story, we know that you are a police officer on a sabbatical and you dig out your threads from your police files. From where did this story emerge?

This story idea was picked up from a real-life incident in Kerala’s Mulanthuruthy where two children were killed after being hit by a car used by four policemen who were all inebriated, as per the case records. The four were on the run after the accident — which triggered protests and outrage —and the case went all the way to the Supreme Court. In fact, the Kerala High Court rejected the police officers’ anticipatory bail. What they argued was that they were just passengers (off-duty) and the vehicle was driven by someone else. The New Indian Express had published an article on the same. Then, there were some political developments. All I did was to link the dots connected to tell the police side of the story which one usually wants to listen to. Everybody loves to portray police as bad elements.

If there is a perception among the larger public that policemen/women are bad, then blame has to go to the police force itself.

If you are talking about the Kerala police, I differ. Probably till the 90s, I agree terrible things have happened which needed outright condemnation. Since then, it has been much, much better. I can tell you from my own experience that the force is now packed with educated and cultured people (remember they are all recruited through the PSC) and if you take 100 people, a majority of them are teetotalers who don’t even smoke. I am saying this just to drive home the behavioural aspects and break the prejudice people have about cops in general. I am not saying there are no bad apples or black sheep, but there are also good, peace-loving, truthful, and hard-working officers. Interestingly, a majority of the people in Kerala have never stepped into a police station to get that first-hand experience they all claim. So how and who has created this dreaded image?

First, media and then cinema. In our films, we always have exaggerated accounts of police atrocities, and even the roles are written in such a way that people take home dreadful memories about them. And there is the other extreme of having them shown as buffoons or side-kicks. The media always uses police, whatever they do, as a tool to attack the current government in power, no matter which party is at the helm. The police force is trying to stave off that ingrained image by unleashing several initiatives such as Janamaithri project and Student Police Cadet Corps (SPC), of which major credit should go to P Vijayan (IG). What I hear is that many other states are now emulating the SPC project.  Let me also say even my film is an attempt to change the way people look at the police. When you read news about a police incident next time, people should think that there is another side to the story. Irrespective of the party which is in power, the police ordeal continues. Trust me, we are also human beings with family, children, and all.

Some cite logical loopholes, saying *the officers on the run* could have easily surrendered.

The Mulanthuruthy incident which I have mentioned earlier itself shows why some decide to approach court for anticipatory bail than take the other route. In most cases, it’s the safer option and the law does provide it.

Many seem to have disliked —rather not understood — the way you ended the film. Is that the climax you had in your first draft or were there several versions?

This indeed was the first version, but later we toyed with the prospect of two/three alternative endings. Then after repeated discussions, we stuck to the original idea.  To give the film a cinematic ending, just for the masses or the box office, after having shot everything realistic would have been criminal on our part. We all wanted the film to be open-ended with each viewer taking home their own versions, and asking their own questions. Like we travelled with the film, I wanted each of you to travel with the characters. If you are discussing the film for at least 15 minutes after it ends, then I would say we are successful.

Is there any ‘police film’ you are fond of? We are curious.

Beyond doubt, Yavanika (KG George), particularly because of its investigative brilliance. Then Dileesh Pothen’s Thondimuthalum Driksakshiyum is an all-time favourite. A police tale could not have been simpler and lovelier than that.

So next is what? Dusting up another old police file to leave us enamoured?

First, like everyone else, I am waiting for the pandemic to subside and for us to get back to the world we once were in. On the work front, I have a few threads in my mind which are too early to even talk about. It could be a police tale starkly different from either Joseph or Nayattu.

Has anyone from the police force called you after the film released? Finally, when are you back on duty?

From top IPS officers to constabulary, many. In 2024, I will be back on duty.