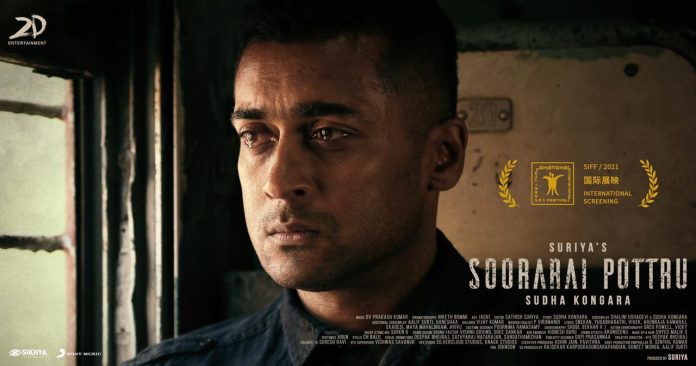 Superstar Suriya's Soorarai Pottru has been selected to be screened at the prestigious Shanghai Film Festival 2021, one of the largest film festival in East Asia.

Tamil film Soorarai Pottru, a fictionalised version of Simply Fly, an autobiography of Air Deccan founder, Captain G R Gopinath, is now the third most rated film in the world on IMDb.

This 2020 movie, which was eligible for a Best Picture nomination at Oscars 2021 among 366 films but failed to get nominated, has a 9.1 rating on IMDb, after Shawshank Redemption and Godfather. Reacting to the news about Soorarai Pottru’s rating on IMDb, the director Sudha Kongara told The Federal, “It is the greatest pleasure. Being right next to my most favourite film, and the film that inspired me to get into cinema—The Godfather.”

This tale of triumph in the face of adversity, features in the top 1,000 movies of IMDb, an online database of information related to films, TV programmes, home videos, video games and streaming content online.

Helmed by superstar Suriya, who shone in the film with his earnest portrayal of Captain Gopinath, Soorarai Pottru premiered directly on OTT last year. The movie, produced by Suriya and features Aparna Balamurali as well, has been also selected to be showcased in the prestigious Shanghai Film Festival 2021, one of the largest film festival in East Asia.

Talking about why the film resonates with audiences today, Kongara, who has directed Madhavan’s Saala Khadoos and a short film in Netflix’s original anthology, Paava Kadhaigal, said, “These are heart-breaking times for people across the globe. The core of Soorarai Pottru is bravery and human triumph in the face of the greatest challenges and adversities. Perhaps that is why it is resonating with the viewers in these difficult times.”

It is the real story of an Indian who fights all odds to achieves success, added Kongara. The film chronicles the life of Captain Gopinath who has a message to tell young people, to go ahead and dream big and then live, work and breathe for that dream to come true.

It is Captain Gopinath’s ‘grit and passion’ that had struck a deep chord Kongara. “His life was an underdog’s race, and I was drawn to it,” she said in an earlier interview. It took her ten long years to track Gopinath’s story and turn it into a powerful screenplay.

Kongara first came across his story in 2010. She had studied his book Simply Fly like a Bible. “I was reading everything about him, and after I had one success to my name, I met him to get the rights of his book,” she said.

She empathised with the Air Deccan founder for trying to be different because Kongara too fought hard to carve a name for herself in Tamil cinema. She is the only female director to have worked with superstars like Madhavan and Suriya.  “They want to work for me because of my stories,” she explained, pointing out that both Madhavan and Suriya fell in love with her scripts and were obsessed with giving their best.