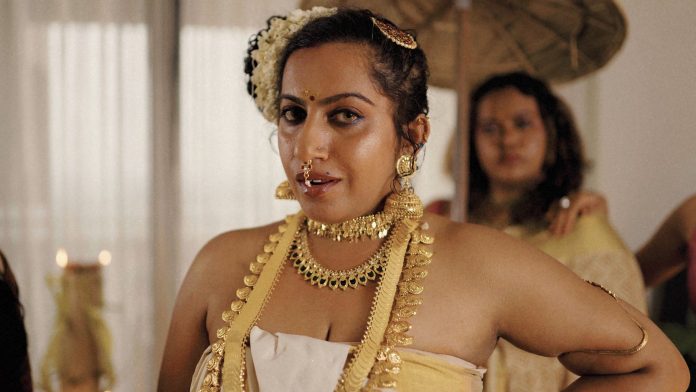 Bless Ya Heels features Marykali and her "sistahs" togged up in the traditional Kasuvu sari, being provocative, challenging and demanding respect for being a woman

Singer-composer Anna Katharina Valayil aka Tribemama Marykali is not a artiste you can easily ignore. Her latest single Bless Ya Heels, which released in April, hits you hard with lyrics on female power. Directed by Lendrick Kumar, it features Marykali and her “sistahs” togged up in the traditional Kasuvu sari, being provocative, challenging and demanding respect for being a woman.

The single, which has a danceable beat, has lyrics like ‘Wash your feet in the rain and pray, Before you move towards my temple…Bless ya heels, you stand on sacred ground…I am a Star of Venus…I am Goddess witch, Badass bitch…Tribe mama from the core, Am diggin in the core now!’

The single has been described as “feisty and funky”. In Marykali’s words, Bless Ya Heels has been inspired by her “femininity, which is the core of her art right now”. Most south Indians will remember her as the playback singer for the popular, fun number Appangal embadum in Dulquer Salman and Nithya Menon’s Ustad Hotel. Last year, this Kottayam-born, Nigeria-bred Marykali was extremely active releasing two singles – Freakay and Flames.

Here are excerpts from an interview with The Federal:

Why did you release Bless Ya Heels during the pandemic?

I was done procrastinating and decided I am bringing out the music I got. I told my manager Nikhil Vijayan (Niko) that if we allow ourselves to sit here procrastinating, we are choosing to stay broke. If my maid, a widow could brave the pandemic to come out and work to earn her daily wages, what was stopping me? My tribe and I were broke and the last thing we needed was to live the rest of our lives blaming the pandemic and other external factors and not holding ourselves accountable for not making it through like we should.

My manager Niko directed and shot our first video Freakay, my sister Becky was my stylist and my friend Ruby helped choreograph the song. Freakay was shot on Niko’s Smartphone.

Do you think digital platforms offer a great opportunity for Indie artistes like yourself?

Digital platforms are great for Indie. Music and art is being released on many platforms on a daily basis and we never had that before. But it has also handicapped a lot of us. We miss out on human relations, and in some cases, someone’s work is called a success based on likes and views.

Social media and digital platforms can be very judgemental and difficult to crack. These digital platforms are also run by people, for the people. Ultimately, it’s that human connection I believe we could nurture through art that kind of worked out for us more than anything. I have great reverence for my art and that’s how I feel for my crowd. These platforms must reciprocate the same, if not, it won’t work out for me. I am an artist and not a people-pleasing entertainment figure.

Bless Ya Heels has some striking visuals, women dressed up in traditional Keralite gear and being provocative? What is the central message of the track?

The women in the video are my three ‘sistahs’ with me. Becky my sister and my stylist draped me like a thamburatti (queen) in that video. Why not? I represent my ancestors, I believe we got to be the ones breaking curses like gender, racial and social inequalities and that is why things don’t come easy for us. I am not colonised completely. I still got that gangster thamburatti gene from my mother and she got it from her mother…and that is some superior ancient bloodline stuff.

The central message of this song is all of us daughters existed in this world even before our time of conception, we are divine and sacred portals. A daughter is a supernatural woman even before birth. So, we have to be self aware of who we are before we choose to let some society tell us where our place must be and it’s certainly not on the footstool.

What’s the muse for your lyrics?

Kerala is an ancient land filled with so much folklore and mystery. We had a strong matriarchal system but the British colonizers came and spread their white stuff. In having said that I would rather enjoy a gender balanced human society than this patriarchy- matriarchy battle. I drew inspiration from my cultural background as a Malayali to invoke that kind of vibe. The words were carefully chosen to bring out this mood and aesthetic. So, the muse is the strong feminine presence which has influenced the history and culture of Kerala.

How would you describe your music? Is it a combo of funk-pop-folksy?

My producer Da Architect and I made this song. We both have black influence in our music taste. I was raised in Nigeria, so definitely we hit Afro. It’s more genre-bending like a mix of alternate RnB, Afro, electronic music, Kerala folk and some pop influences.

What is your view on the Indie music scene in India? Artistes made money through live gigs before but has COVID affected Indie artistes?

Independent music is getting stronger than ever in a country where film music is consumed every second.

I never did much covers, so I hardly got any live gigs in Kerala. So, the lack of live gigs has not affected me. I was okay with it, I struggled much more than I should have because I was very famous for singing Appangal Embadum. Can you call cover singers Indie artists? Or, artists who bring out their own stuff? Because here in Kerala, we really don’t have much Indie, and whoever is there don’t get paid. COVID has certainly affected cover artists and bands but not really the Indie artists, they never get called to play live or get paid for it in Kerala.

You said that the younger generation need to know women are powerful, not limited by their bodies or their responsibilities – can you elaborate on this?

Being a mother is not a woman’s ultimate calling, she is far beyond that. She has a strong identity and purpose that she must fulfill like any individual. She has 400 ancestors walking behind her. She is far more evolved than society can ever comprehend. Yet, this world tests her strength and endurance to make her silent.

She must slowly break out of the social mould she has been programmed to stay to be called a good girl. This freak show called the “good girl” must be played out every time in exchange for social validation from a group of people called the society. It treats women as something weak, pushing them into their bodies and locking up their minds and limiting their cerebral rights. The feminine side and its supreme creative energy that is worthy of being experienced is tactfully glass framed, kept and worshiped so we remain inside a box and never come out of it.

One (younger generation) must experience this power herself and understand it before she can transmit it through her bloodline. How can someone fight for something that she is taught never to possess?? Self-awareness is key. You’re not your body, you are who you choose to be.

Why show women smoking in your video? Strong women are not represented by smoking are they?

Smoking is bad but if that’s the case why is it being sold? Because the government does not decide what we should do. We have a choice. So, if a man can, so can a woman, if a woman can, so can a man. I have never heard any parent or head say “why don’t you learn from women and never give into such drinking and smoking habits that are bad for your body?”

My mom doesn’t drink or smoke, but my dad does both. A child picks up traits and habits also from the father. My father gave us a lot of freedom to exercise and expand our cerebral capacity. He would quote Bob Marley and sing “emancipate yourself from mental slavery, none but ourselves can free our mind”.

Are you working on any film projects? What was your experience with Ustad Hotel?

Ustad Hotel has a special place in my heart. I have good memories…it happened nine years back, that’s a long time ago and it was a good experience.