Think of the moonlit night, a retro Hindi music lover would immediately begin humming Khoya Khoya Chand. Want to mourn unrequited love and they have Din Dhal Jaaye Haye Raat Na Jaaye. For the kind that loves a peppy twist to romantic numbers, Roop Tera Mastana is the first choice. And for those yearning for classical melodies, Poocho na kaise maine offers refuge.

If the above has a common thread it is the versatile Sachin Dev Burman or SD Burman. With a career spread across three decades, the most transient phase of music in Hindi films, SDB’s work was defined by variety and an enduring appeal to music listeners, traversing several genres. The fact that his repertoire has stood the test of time, even 44 years after his death on October 31 in 1975, is a testimony to the fact that he remains one of the most influential composers in Indian film music.

Making music at a time when every composer had his distinct forte, SDB was armed with a unique range. From combining Bengali bauls of the mystic minstrels like in Aaj sajan mohe (Pyaasa) and bhatiyali or the songs of the boatmen in Sun Mere Bandhu Re (Sujata) and Wahan Kaun Hai Tera (Guide), SDB’s works could never be pigeon-holed. The vastness of the tunes was his unique brand and that can be fathomed better by comprehending the collaborations he has – from the evergreen and debonair Dev Anand for the films helmed by his younger brother Vijay Anand to the stoic Bimal Roy and the brooding Guru Dutt.

The Anand’s gave him an array of albums all through 50s and 60s with Taxi Driver, Nau Do Gyarah and Kala Bazar. At a time when melodious numbers were wasted on poor picturisation, Vijay Anand, a perfectionist, dwelt heavily on SDB’s tunes for unique sequences. A breezy Dil ka bhanwar from Tere Ghar Ke saamne remains unmatched with the sequence shot entirely in Qutub Minar and so are the songs in Guide.

Especially, Aaj phir jeene ki tamanna hai, which was shot in the Chittor Fort that celebrates a neglected wife’s newfound freedom as she steps out in the open and from the overbearing shadows of her indifferent husband. The pinnacle of their brilliant association was in Jewel Thief, the spy thriller heist flick, for Hothon mein aisi baat that was heavily folkish and amped by a fine dance performance by Vyjayanthimala. Today, the numbers stand for the close associations directors and filmmakers had in those days, when songs were made in the presence of artistes and filmmakers.

While Mohammad Rafi dominated the voice of Dev Anand, SDB was the first to bank on Kishore Kumar. Frequently – Mana Janab ne (Paying Guest) or Jeevan ki safar mein (Munimji). He roped in Hemant Kumar in patches – Baat Ek Raat Ki has his softer rendition to suit the mysterious Na tum hamen jaano. But of course, his most favourite among the lot was Lata Mangeshkar. He once said, “Give me Lata and a harmonium, I will make music.”

While the Bengali-bonding with Kishore was evident, even as he liked Rafi’s voice, it was the song that rose above the singers for him. It is no wonder that when you randomly sample 10 from an entire playlist of SDB songs, you will find a wide range of voices — Manna Dey, Talat Mahmood, Geeta Dutt and Asha Bhosle. Amid them you would also be regaled by Burman himself who played the bardic commentary with songs like Safal hogi teri aradhana (Aradhana) and Ore majhi mere sajan (Bandini).

Quarrelsome and particular about details, SDB is said to have fought with Roy, when the latter was not keen on picturising the song Mora gora ang (Bandini) written by a debutant Gulzar outdoors. Later, the two agreed to shoot the song featuring Nutan in the courtyard. Burman didn’t work with lyricist Sahir Ludhianvi after Dutt’s Pyaasa after a spat with him. While Dutt and Burman had a successful association since Baazi, Kagaz ke Phool was the last of their collaborations. However, it was Anand with whom he had the longest partnership.

Roy, Dutt and Vijay Anand had gradually been replaced by the new breed of filmmakers. Amid them, SDB spelt the change in music with Shakti Samanta’s Aradhana, albeit heavily influenced by his son Rahul Dev Burman. SDB continued his run with Prem Pujari and Tere Mere Sapne, apart from making newer associations with filmmakers like Hrishikesh Mukherjee. The musical drama Abhimaan became a milestone for its melodies and the subsequent works in Mili and Chupke Chupke ensured that even the last leg of his composing career stood out.

SDB received all the recognition in his lifetime — two National Awards, Padma Shri and many more. However, the fact that he made music till his last breath, alongside his son and remained relevant all through make him a composer like none other. 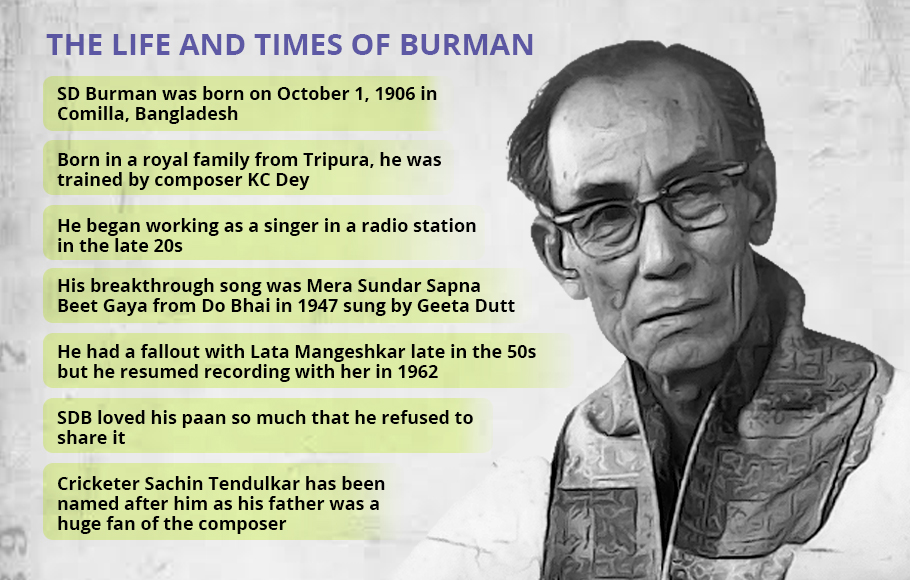 11:57 AM, 7 February, 2023 0
Finance, HR teams to receive most pink slips; aerospace major to hire another 10,000 employees this year with a focus on engineering and manufacturing