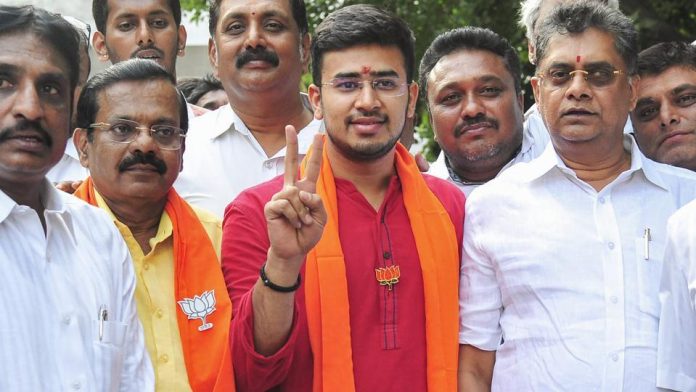 This general election seems to have turned into a test of one’s patriotism. If you are with Modi, you are with India; if you are not with Modi, then you are anti-national. That’s how BJP candidate for Bangalore South Tejasvi Surya ended a speech last week.

Six years ago, speaking at the launch of Namo Brigade, a campaign to make Narendra Modi the prime minister, Tejasvi had said, “We are the incarnation of Sri Krishna — it’s our duty to go and establish a dharmic establishment in this country again. An establishment that will care for the people of this country.”

In the wee hours on March 26, the Bharatiya Janata Party chose the 28-year-old RSS and Akhila Bhartiya Vidyarthi Parishad member to represent the Bangalore South constituency. Tejasvi is known for his fierce Hindutva idealogy.

Even former chief minister BS Yeddyurappa was under the impression that Tejaswini Ananth Kumar, wife of the late union minister Ananth Kumar, would be the party candidate. The party’s last-minute decision has upset local BJP leaders who rallied behind Tejaswini to get the ticket. BJP MLAs such as V Somanna, R Ashok and Sathish Reddy’s weren’t present during his nomination.

Talking to The Federal, Reddy acknowledged that a section of the BJP workers were uneasy and they are trying to sort out the differences. “We thought Tejaswini’s ticket was almost finalised. She was in the public domain for a long time and could garner sympathy votes for the party. Now, we have a new face and we will have to support him as we are all here for Modi,” said Reddy, the Bomannahalli MLA.

The seat, held by the BJP since 1991, sent Ananth Kumar to Lok Sabha six times in a row until his death. Reddy added that Bangalore South remained a safe seat for the BJP and the party was sure that any candidate would win the seat there.

Surya, a qualified legal professional, courted controversy time and again, including on Tipu Jayanti. He held a strong view that Tipu Sultan was a Muslim fanatic who converted many people to Islam. He backed Mahesh Vikram Hegde, the founder of online news website Postcard News, and fought for him in court. Central Crime Branch sleuths arrested Hegde last year for publishing fake news that disturbs communal harmony. He is now out on bail. Representing him in court, Surya called his arrest a political witch-hunt by the Congress, saying that the Siddaramaiah government targetted Hegde for no reasons.

Surya, who is the nephew of BJP lawmaker Ravi Subramanya, will be the youngest MP, if voted to power. With his sudden rise to fame, his views and tweets have been scrutinised since yesterday. He is also the founder of social organisation Arise India and columnist at opinion and news portals like Swarajya, Opindia and IndiaFacts. Surya and RSS leaders BL Santosh could not be reached for comments. Meanwhile, Subramanaya told The Federal that RSS shaped the youth’s political aspirations and his social involvement over the years could help the party.