The recently-concluded Lok Sabha elections show that Tamil Nadu and Andhra Pradesh continue to be the Achilles’ heels for the Bharatiya Janata Party (BJP). The party has witnessed a complete rout in these two states.

The BJP’s vote share in Andhra Pradesh was lower than the votes polled for None of the Above (NOTA), which was 1.49 per cent. The party’s vote share in the state declined to 0.96 per cent from 7.2 per cent in the 2014 Lok Sabha elections, when it allied with the Telugu Desam Party (TDP). With its break from Chandrababu Naidu, the BJP also lost the support of the Jana Sena Party (JSP), which had extended its support to the BJP-TDP alliance in 2014. 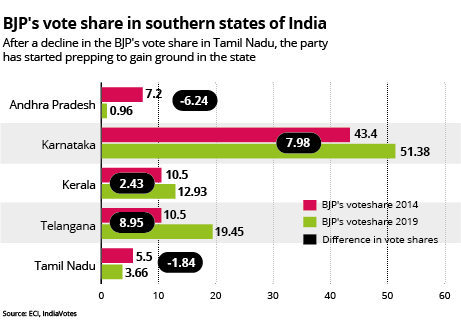 The saffron party seems to have suffered the wrath of voters for not implementing the Andhra Pradesh Reorganisation Act and for denying the Special Category Status (SCS) to the state. The possible slip in BJP’s vote share is also because it has never been a dominant party in Andhra Pradesh. While the Congress once ruled the undivided Andhra, the regional parties such as the TDP and YSRCP have now taken over.

Even in the neighbouring state of Tamil Nadu, the saffron party’s vote share slipped to 3.66 per cent from 5.5 per cent in the 2014 Lok Sabha elections. While there were five players in 2014 (AIADMK, DMK, BJP, DMDK and PMK), the AIADMK formed an alliance with the BJP in 2019. As per vote shares of the AIADMK and BJP in 2014, the alliance was seen as the strongest in the state with a combined vote share of 50.4 per cent. However, the AIADMK-BJP alliance won just one of the 38 parliamentary seats in Tamil Nadu. Polling in Vellore constituency was called off by the Election Commission on account of cash being used to influence votes.

In 2014, the BJP won Kanniyakumari seat from Tamil Nadu by a margin of over 1.2 lakh votes. This time, however, the party failed to secure even one seat on its own.

Analysis suggests that minorities this time voted for the DMK-Congress alliance and votes got split in certain seats by smaller parties such as the Amma Makkal Munnetra Kazhagam (AMMK) and Naam Tamilar Katchi (NTK). As a result, the BJP-AIADMK alliance suffered a rout.

However, despite that BJP leaders feel there is a space for the party in the state. Multi-pronged strategies to ensure that the BJP occupies centre stage in Tamil Nadu politics are underway, with Amit Shah’s focus on the Tamil Nadu Assembly polls scheduled for 2021.

In the 2019 Lok Sabha polls in Telangana, the BJP’s vote share increased to 19.5 per cent from 10.5 per cent in 2014. The party won four seats — Nizamabad, Secunderabad, Adilabad and Karimnagar — in the state. It is believed that the increase in its vote share could be because of the ‘Modi wave.’ It could also be a spillover of the Modi wave from Maharashtra, where the BJP-Shiv Sena alliance won 41 out of the 48 Lok Sabha seats.

In Karnataka, where the BJP won 25 out of the 28 Lok Sabha seats this time, the saffron party seems to have benefitted from the differences between the Congress and JD(S). Moreover, the party had in place strong campaigning strategies that allowed it to take advantage and expand its reach within the state.

In Kerala, where the BJP’s vote share increased marginally, the Modi wave or its stance on the Sabarimala issue do not seem to have worked in their favour. While the party was able to create a reasonable divide in vote shares in Thiruvananthapuram, Palakkad, Pathanamthitta and Attingal, it could not earn them seats. Instead, the Congress seems to have benefitted due to its stance on the Sabarimala issue.