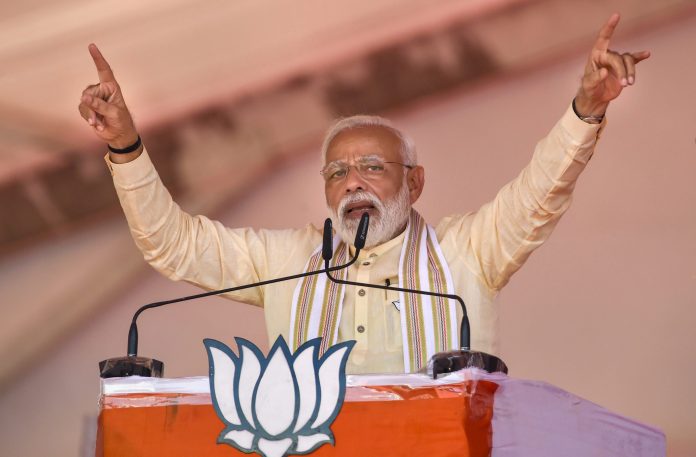 The mention of Prime Minister Narendra Modi immediately conjures up the image of a “strong leader”, an individual with a “56-inch chest”,  he is macho and can single-handedly change the destiny of India.  He is someone to be feared,  a leader who cannot tolerate corruption;  an authoritarian streak runs in him and if he comes to power now India may not see another election…so on and so forth.  But how real are these descriptions?  Or are they part of a successfully-churned out myth?

In the myth-making, one crucial element is always missing;  an element that has the potential to puncture the myth.  The RSS.  Modi is what he is and has become that because of his association with the RSS.  At the back-end is this Nagpur–based fountainhead of Hindutva and the idea of Hindu Rashtra which has, through informal discourse, inflated Modi to a larger than life figure who can do no wrong and even if he did, that is because of the inefficiency of people around  him.

Modi is not the first. In recent history,  there was another strong leader called L K Advani who at one time was considered irreplaceable in the BJP, a party he founded along with his friend and a fellow-RSS traveller Atal Behari Vajpayee.  But in the run-up to the 2014 general elections,  Advani found himself slipping and eventually out in the cold.  And the drum beat echoing the name of “Modi” took over, eventually winning him the prime minister’s chair.

The author of the drum beat was, by all accounts, the RSS which reckoned that Advani had crossed his “sell by” date, having lost the 2004 and 2009 elections, and found a replacement in Modi.  The reverberations in favour of Modi still continue but the point is: does that make him a strong leader? For, among the characteristics of a strong individual are traits, one of which is fearlessness. Doubt arises on this score vis-a-vis Modi as he has notched up the dubious honour of becoming the first Indian prime minister not to address a press conference.

There have been one-to-one interviews with select journalists, or a regular monologue over radio but there is nothing quite like facing the media head-on.  For, the media comprises journalists of all kinds – with varying degree of support, neutrality or opposition to a particular prime minister or a political  party. This means questions will be fired on any topic and the prime minister has to answer them spontaneously. All previous prime ministers did this and even the allegedly “silent” Manmohan Singh handled the media with aplomb.

But Modi has shied away and this casts doubts over his image as a strong leader.  For, by definition a strong leader is also expected to be gutsy with the courage to take on any question. If another elected leader, United States President Donald Trump, were to be considered, for all his faults he has never hesitated to meet journalists despite overt hostility from a section of the press. On this score, Trump trumps Modi.

Modi’s image as a strong leader, for the first time, appeared to be on shaky ground last November when the BJP lost three key states in Assembly elections. His cabinet colleague, and more importantly another key RSS figure, Nitin Gadkari appeared out of nowhere to advice party president Amit Shah to take responsibility for the defeats.

More recently,  Gadkari came on television to say that there was no personal enmity with Rahul Gandhi and the rivalry was confined to politics and elections.

With just over 10 days for results of the ongoing general elections there is speculation over whether the BJP and its allies can cross the simple majority mark of 272. And, in what cannot be a coincidence, Gadkari’s name is doing the rounds as a possible replacement in case of a BJP-led coalition where allies prefer someone other than Modi.

Gadkari  as an alternative in conjunction with his conciliatory statements is similar to how Modi’s name first appeared in informal conversations as an alternative to Advani prior to 2014.  One cannot help but conclude that the priming of Gadkari as possible replacement  is most likely the work of the chatterati close to the RSS.   Clearly,  a strong leader in the BJP is only as strong as its mentor in Nagpur would like him or her to be.

There have been genuinely strong independent-minded leaders in history like Mahatma Gandhi or Nelson Mandela who stamped their mark on the world and will not be easily forgotten. But they are few and far between.

In the West, say in the United Kingdom, prime ministers come and go but they are rarely described as strong leaders.  The last one close to being called that was Margaret Thatcher who was called “The Iron Lady”.  After her there has not been anyone in the bracket of a strong leader.  So is the case in Sweden and many other democracies in Europe. The reason is in those countries the democratic institutions are strong and cannot be easily tampered with by any individual heading the government.

Trump has turned out to be a test for the US institutions and the results have been mixed.  While the president has pushed through certain policies like restricting arrival of Muslims into the country, rescinding Obamacare and abrogating the nuclear treaty with Iran,  he has been unable to arm-twist Congress into agreeing to fund the construction of the Mexican wall and prevent investigations into his suspected links with Russia that allegedly helped him come to power.

Unfortunately  in India, where a feudal mindset still prevails, individuals are hyped up in preference to institutions and the results can be disastrous. Demonetization (a decision which all but bypassed the Reserve Bank of India) is perhaps the classic example of a disastrous move announced with elan by the Prime Minister for which he has never been held accountable, unless of course the election results on May 23 prove otherwise.

As the management guru Peter Drucker said, “ No institution can possibly survive if it needs geniuses or supermen to manage it. It must be organised in such a way as to be able to get along under a leadership composed of average human beings”  —  something that is sorely needed in today’s India.

BJP’s Manoj Tiwari hopes electorate will dance to his tune

Chidambaram hits out at PM for not accepting proposal of debating CA...