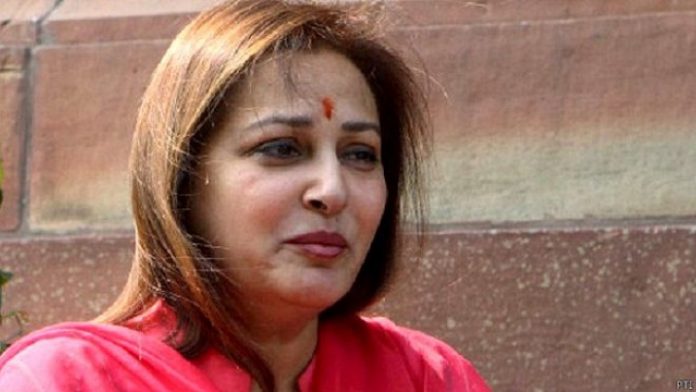 Actor Jayaprada is contesting from the filmiest place in all of Uttar Pradesh. And, keeping with the spirit of her constituency Rampur, a small town with a unique Bollywood history, a racy confrontation between a wronged woman and a misogynist villain—both of whom incidentally were friends once but are now intent on revenge— is unfolding.

The drama is packed with so many tears, threats, theatrics, mythological references, subplots and whistlepodu dialogue that someone like Ramgopal Verma may have been tempted to call it Rampur ki Mahabharata, or, if you like it more corny, Abla ka Badla (revenge of the hapless woman).

Jayaprada, who flipped for the BJP recently after years of aayram-gayaram (defection) politics, is facing Azam Khan in Rampur, a few hours’ drive from the famous north Indian hill station Nainital. Several years ago, when Jayaprada was part of the extended Samajwadi family headed by Mulayam Singh, Khan was considered her close aide in the politics of Rampur, from where she had won two consecutive elections till 2009. Now they are sworn enemies.

In 2014, Jayaprada had left Rampur to contest and lose from Bijnor. Since her electors were seeking an explanation for her exodus and return, the actor found some truly filmy reasons. And that’s when the real drama began.

Jayaprada canned the first shot when she lamented in a voice laced with emotions and amped up with sobs that she had to leave the constituency because of fears of an “acid attack.” “I have the right to live, and live I will. But I will also serve you,” she said to a rapturous applause.

A few days later, she again let the tears roll while complaining that she had always considered Azam Khan a brother but the latter had called her a “nachnewaali” (a pejorative term for a dancer). “Could I have let a brother bear the humiliation of a nachnewaali? No, so I left Rampur,” she said.

Rampur, for those who are not fans of Hindi cinema, was once famous for knives that villains brandished on the screen. For Pran, Prem Chopra and Madan Puri, the quintessential baddies of that era, these Rampuri chaakus (knives) were essential accessories, like the Batman’s batpod these days. In an iconic scene from the film Waqt, Puri flashed open a Rampuri with the trademark click to threaten Raj Kumar, only to be told that such things were not meant for kids. Unfortunately, guns soon replaced knives and Rampuris went out of vogue.

You could take Rampuris out of the hands of the screen baddies, but not Rampur out of cinema. So, in the late 70s, Bollywood doffed its hat at this Nawabi town again with a film titled Rampur Ka Laxman. The film had some memorable melodies by RD Burman lipsynced by Hema Malini, who later became synonymous with Ramgarh and is now contesting from Mathura for the BJP.

In the 80s, Rampur Ka Laxman was swiftly replaced by Rampur’s Azam Khan, a fiery leader who became the poster boy of this town known for knives, Urdu poetry and Nawabs. With the Muslim vote in his back pocket, he won consecutive elections for various parties—a trait similar to Jayaprada’s party-hoping history— before becoming the face of the Samajwadi Party in the region.

On his home turf, Khan doesn’t let go any slight, perceived or imagined, unanswered. For every barb, he has a stock of verbal Rampuris, each more lethal than the other. So, when Jayaprada launched her tirade against the “estranged brother”, he hit back with characteristic vitriol and, like always, below the belt.

“It took you 17 years to see her real face. I held her hand and brought her to Rampur, kept her under my guidance for nearly 10 years. Within 17 days I realised that she was wearing a khaki (associated with RSS) underwear,” Khan said.

“Draupadi is being disrobed in Rampur,” foreign minister Sushma Swaraj said, objecting to Khan’s comment, underlining the scale, magnitude and theatrics of the controversy. In response, Jayaprada sought sympathy and solace, asking, if Azam Khan wants her dead.

For a moment, forget the theatrics and the optics and look at this battle purely from a tactical point of view. With Jayaprada shedding tears, positioning herself as a hapless woman under attack from an atavistic thug who would stop at nothing to destroy her, Khan is committing political hara-kiri by living up to the image with his brainless barbs. In Indian politics, like in cinema, a scorned woman always walks away with the applause and votes.

None of this, of course, will make Khan mend his ways or control his tongue. Khan is well-known for streaks of medieval misogyny and an even more ancient and deplorable flashes of feudalism. When Khan opens his mouth to speak, it is well-known that decency, etiquette and traits you associate with gentlemen go flying out the window. In the past, he has made some unprintable comments against Narendra Modi, Rajeev and Sanjay Gandhi, credited Pakistan for conquering the peaks of Kargil and was accused of calling Bharatmata a daayan (witch).

To add to his poisonous tongue, is the history of his animus with Jayaprada, a proxy for her mentor Amar Singh. Jayaprada was paradropped on UP after her failed stint in Andhra Pradesh as a TDP leader by Singh, who was once close to almost everyone who mattered in the state, including Khan.

But, the thing about Singh is that once he becomes part of any parivar, he ultimately ends up breaking it apart, by design or by default. The biggest example of his “influence” is the once-legendary friendship of Amar Singh, Anil Ambani and Amitabh Bachchan. At its peak, their bon homie was referred to as the love between Amar-Akbar-Anthony, after a famous film starring Bachchan. Later, the three fell apart and became fierce critics of each other.

A similar breakup transpired in the Samajwadi parivar sometime in the last decade when Amar Singh, Mulayam Singh and Khan fought bitterly. The first round went to Amar Singh, who got Khan thrown out for opposing Jayaprada’s candidature from Rampur in 2009. Later, the tables were turned on Amar Singh when Mulayam Singh expelled him from the party and reinstated Khan. Since then, the cauldron of grievances, betrayals and revenge had been bubbling. The battle of Rampur, with the proxies in the front and their masters in the background, has thus become a perfect opportunity to settle scores and play the parts their bitter and ugly histories have thrust on them.

‘Magic of cinema happens without planni...