The BJP has released its poll manifesto which promises to ‘double farmers’ income’ in one year and build houses for all by 2020. Making the key announcements at a release function attended by BJP leaders Rajnath Singh, Arun Jaitley, and Sushma Swaraj, the PM said this was probably the first manifesto which was being released by a government ‘that will continue to remain in power.’

The manifesto, apparently curated to counter the Congress president’s NYAY scheme announcement which promises Rs6000 per month to the poor, lays much focus on the economically weaker sections. “We will spend Rs25 lakh crore on the development of rural areas in the country,” the PM said adding that a pension scheme would be introduced for small and marginal farmers apart from the Rs6000 annual support already in place. The PM said the sustained aim of the government was to deplete poverty to a single digit figure.

Modi focused on the nation’s achievements and national security under the regime and said India was in the forefront of science and technologicy and had made major strides on all fronts. The PM stressed on inclusion and said the three-pronged approach of nationalism, women’s development and rural prosperity would continue. Stoking the now-dormant Ram temple narrative once again, the PM said alternate arrangements would be explored for the construction of the Ram temple in Ayodhya. He said the party was committed to implementing the uniform civil code. 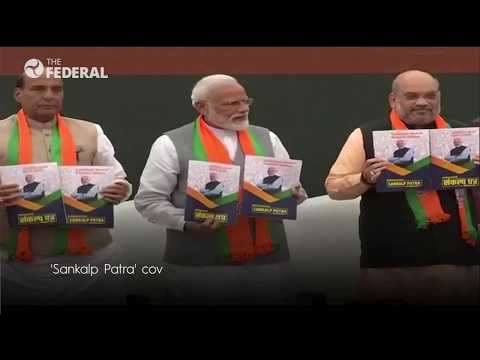 Prior to the PM’s address, BJP president Amit Shah said the party had taken the opinion of six crore people while preparing the ‘sankalp patra.’ “When we came to power, India was the 11th major economy. Now we are the 5th largest economy,” he said.  Finance minister Arun Jaitley, who spoke more on the work behind the manifesto, said the document was made after much thought and debate. “This manifesto has not been prepared with a tukde tukde mindset and an Ivy League mindset,”

Congress leader Kapil Sibal said the manifesto was just another document which intended to give false promises to the people. He expressed dismay at the party not taking cognizance of the NYAY scheme. “I thought they will welcome our Nyay scheme. When they couldn’t do it, how can they work for farmers?” Stating that the BJP was least committed to solving farmers’ crisis, Sibal said, “At least 36,000 farmers had committed suicide in the past five years. The manifesto will stay limited to Lutyens Delhi. It is a ‘tukde tukde’ party. They are destroying institutions, they are capturing institutions,” he said.

Kapil Sibal said, “honesty and BJP are poles apart. They have destroyed lives of people by demonetisation. In the past five years, the wealth of 1 per cent of the people has increased,” he said.

CPM general secretary Sitaram Yechury termed the manifesto a ‘jumla’ and said the policies of the BJP had only made the lives of people miserable. On the BJP’s move to scrap Article 370, Yechury said the Kashmir policy of the government was a total failure. “There is no mention of the previous promises made. We do not know what happened to the black money trail and the numerous other promises made,” he said.