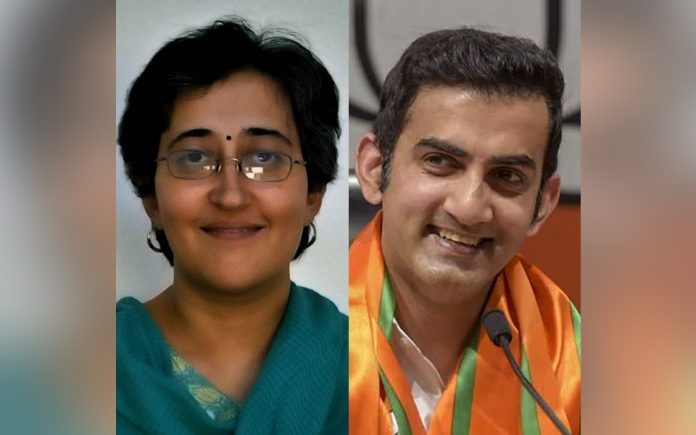 With the ongoing Lok Sabha polls nearing the penultimate phase, the battle for power in the remaining seats has intensified. In East Delhi constituency, particularly, the ongoing controversy between AAP’s Atishi and BJP’s Gautam Gambhir has stolen the limelight of the general elections. The controversy has spiked the interest of people in Delhi about Atishi and Gambhir. With polling in this constituency being scheduled for May 12, it may overshadow other issues.

What is the controversy?

The political atmosphere in the national capital turned into a bitter blame game after Atishi alleged that pamphlets containing derogatory remarks about her as well as her family were distributed by the BJP at housing complexes in East Delhi.

Responding to the allegation, Gambhir on May 10 sent a notice to Delhi Chief Minister Arvind Kejriwal, Manish Sisodia and Atishi, demanding their apology for being ‘falsely accused’. He even took to Twitter to voice his disagreement.

“I declare that if its proven that I did it, I will withdraw my candidature right now. If not, will u quit politics?” he said in a tweet addressed to Aam Aadmi Party (AAP) supremo Kejriwal and Atishi, the party candidate from East Delhi.

Further, he slammed CM Kejriwal in a series of tweets, saying he was ‘ashamed’ to have him as the chief minister of Delhi. “I abhor your act of outraging a woman’s modesty @ArvindKejriwal and that too your own colleague. And all this for winning elections? U r filth Mr CM and someone needs ur very own Jhadu (broom) to clean ur dirty mind,” Gambhir tweeted.

What is the impact of the controversy?

Due to this controversy, Delhi that is going to enter polling in the sixth phase on May 12, has recorded a spike in search of both the candidates. Data from Google Trends, which maps the search interest of users for a particular location, shows that search for ‘Atishi’ on internet peaked in the past couple of days. Google search for cricketer-turned-politician Gautam Gambhir too reached its peak during the same time frame.

According to the data, Gambhir proves to be more popular on the internet when compared to AAP’s Atishi. On the ground, however, Atishi is known to be quite popular in the East Delhi constituency, where the AAP seems to have a higher reach. Over the past four years, the party has been working on the development of these areas including the laying down of sewer pipelines and reconstructing old school buildings.

How does Google Trends work?

Google Trends can be a useful analytical tool to track the Internet footprint of politicians. The tool can be used to determine the popularity of top search queries or keywords over a period of time across various regions and languages. Once a term or a keyword is entered, the website uses graphs to compare its search volume over time.

Depending on the total search volume for that particular keyword, Google shows search interest from 0-100 that is relative to the highest point on the chart for the given region and time. While a score of 100 indicates a peak in popularity for the term, 50 means that the term is half as popular. A score of 0 means there was not enough data for this term.

Key issues take a back seat

Amid the rising controversy between the two political parties, key issues of the constituency as well as the state seems to have taken a back seat at least on the internet. Hashtags of their names have reached over 1.4 lakh unique internet users, according to Keyhole. This means that over 1.4 lakh unique users on the internet have seen a tweet or post with the names of Atishi or Gambhir.

The constituency continues to face issues such as lack of teachers in schools, pollution, absence of water pipelines and electricity. No one, however, seems to talk about these issues or the parties’ promises to resolve these issues even when the polling is in less than 48 hours.