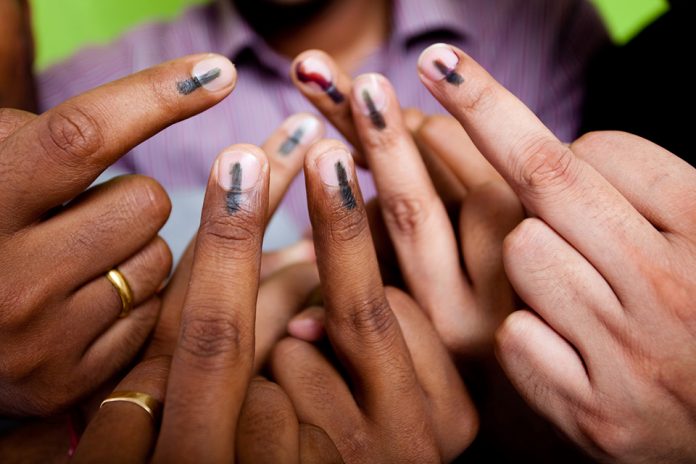 In Tamil Nadu, tentatively 61.52% of the votes were polled till 5.45 pm. Due to malfunctioning of EVMs and VVPATs, polling was delayed at various places across the state. As many as 384 EVMs and 692 VVPATs were replaced as they did not function. Sporadic incidents of violence reported in Chidambaram, Tiruchy Lok Sabha constituencies and Gudiyatham Assembly constituency. Police used mild force to disperse the crowd in these places, apart from open fire in the air in Arakonam assembly constituency.

Nearly, six elderly people died in the polling stations. As the polling was delayed in Puducherry due to the technical glitch, poll timing was extended till 7 pm. In Vellore district, AIADMK cadres pelted stone over the AMMK cadres and broke the car windshield of AMMK candidate Balasubramaniam. Later in the evening, in Kanyakumari constituency, clash broke out between BJP and AMMK cadres in which five BJP cadres sustained injuries. In Tirunelvelli, Manikandan who was set to cast his vote, came to know that his vote was already cast, fought with the poll officials and managed to cast his vote using the rule 49P of the conduct of election rules , 1961.

“The Returning Officer who was sitting in the booth asked everyone to press button number 2,” Syed Zahir a resident of Bengaluru’s Benson Town alleged. Button number 2 in the constituency – Bengaluru Central – referred to BJP candidate PC Mohan, and the voter alleged that the election official was coercing citizens at the booth.

A 53-year-old polling official, who was deployed for election duty in Karnataka’s Chamarajanagar, died after suffering cardiac arrest.

Malfunctioning in Electronic Voting Machines (EVMs) at several polling stations across Dima Hasao district of Assam resulted in late start of voting on April 18. Polling began an hour later from the scheduled time of 7 am several booths in Haflong.

The Ministry of Home Affairs has asked Bangladeshi actor Ghazi Abdul Noor to leave India immediately for taking part in a poll rally in West Bengal, reported PTI. Earlier, the ministry had cancelled the business visa granted to another Bangladeshi actor Ferdous Ahmed who campaigned in West Bengal for ruling Trinamool Congress. Ahmed was also asked to leave India and was blacklisted.

Deputy chief minister and BJP leader Sushil Kumar Modi has filed a defamation suit against Congress president Rahul Gandhi for his remark against people with “Modi surname”, news agency reported. The matter will come up for hearing on April 22. The deputy CM earlier said he was deeply hurt by Rahul Gandhi’s statement wherein he remarked that “all those chors [thieves] share the Modi surname”.

Voting in some polling booths in Odisha got delayed on April 18 following technical glitches in the EVMs, reported OdishaTV. The second phase of polling is being held for five Lok Sabha and 35 Assembly seats in the state.

Meanwhile, a day after an IAS officer in Odisha was suspended by the Election Commission (EC) for allegedly checking Prime Minister Narendra Modi’s chopper in Sambalpur and “violating protocol”, the Congress leaders criticsed the poll body.

He asked, “The question is simple. If SPG protectees of the Congress party can be subjected to inspection why is the same not applicable to the BJP?”

Villagers of Mangoli Kala in Fatehpur Sikri boycott elections over lack of irrigation facilities in the village, reports ANI. A polling official says not a single person had cast their vote at booth number 41.

Jharkhand polls: In the shadow of police repression and a tribal upr...