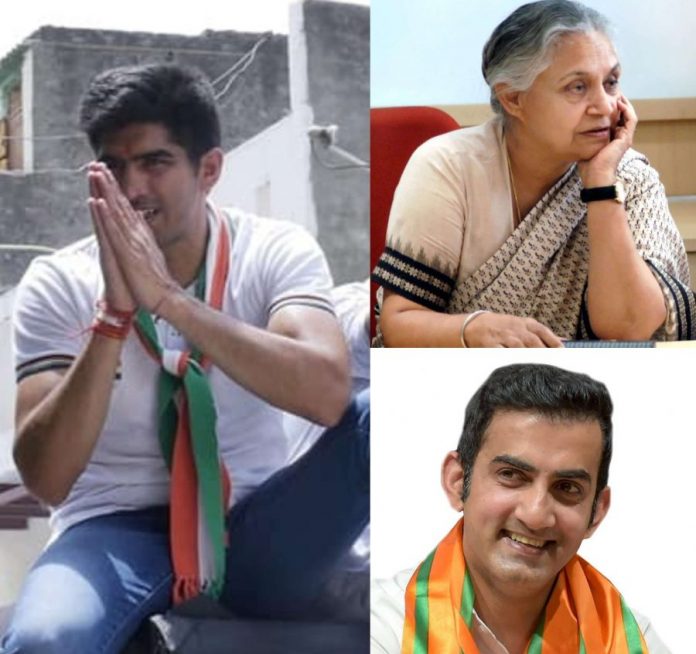 From highlighting poll manifesto to attacking opponents, social media is being used widely by candidates from all three major political parties in the fray in election as much as to achieve greater connect with voters. It is seemingly a triangular contest on all seven seats in Delhi and Facebook, Twitter and Instagram platforms are coming as handy tools by party candidates to project their agenda.

The BJP, Congress and the AAP, all three major parties are going all-out on the social media with polling round the corner on May 12. From veteran Congress leader Sheila Dikshit to new entrants like Gautam Gambhir and boxer Vijender Singh, almost everyone in the reckoning is trying to harness maximum political advantage out of the digital platform.

Olympian pugilist Vijender, who is making his political debut with this election, has been fielded by Congress from South Delhi up against sitting BJP MP Ramesh Bidhuri and AAPs Raghav Chadha. Congress general secretary Priyanka Gandhi held an impressive roadshow for Singh on Wednesday evening which was streamed live on his official Facebook account.
He also shared pictures of the crowd taking selfies with Gandhi or himself, seeking to appeal to the youth voters, who are likely to play a crucial role in the polls.

On his Facebook and Twitter accounts, the 33-year-old from the cradle of Indian boxing —Bhiwani in Haryana, also regularly puts up videos and pictures to broaden engagement with voters online, often using tagline Haath ka sath, reference to his party symbol – hand. Cricketer-turned-politician Gambhir fighting polls from East Delhi on a BJP ticket also shares videos and photos regularly to keep a connect with voters, more so the youth who consume a lot of news on politics through social media.

On his social media account, Gambhir had earlier shared a news report in which he had told a national daily that he had joined politics to “go beyond tweeting”. A poster shared recently on his Facebook account, carries his image and the message — “Not here for picnic. Will show how work is done”. Both debutant politician’s share their canvassing schedule on Facebook and Twitter seeking maximum traction out of the medium. Vijender Singh, who still uses an image of him in his sporting avatar as a Facebook profile picture, has said that, “sports has taught me to fight, and I am here to win this fight”.

Candidates are also using social media to highlight achievements of their respective parties as much as to hit out at opponents for maximum electoral gain. AAP’s Atishi contesting from East Delhi has shared accomplishments of the AAP government in Delhi in the education sector as well as images of star campaigner Swara Bhaskar, who is rooting for the Arvind Kejriwal-led party. Raghav had also shared images of Bollywood actor Gul Panag campaigning for him in South Delhi by riding a motorcycle.

Seen in a turban with folded hands, in his Twitter avatar, Chadha in a tweet on Thursday (May 9) said, “Anticipating the BJPs low politics, we have set up surveillance teams of top volunteers. Armed with spy cams, mobile apps & the grit to ensure free & fair elections, theyre keeping a close eye on the BJPs nefarious activities. Were watching your every move, you watch the law.”

Senior Congress leader and New Delhi candidate Ajay Maken and sitting New Delhi MP Menakshi Lekhi have also sought to leverage maximum traction out of social media. “My voters have made me victorious in three out of four re-elections from the same constituency! Reason is Simple-I never lose touch and am easily accessible for development works!,” he tweeted recently while sharing a video of a meeting with people in a locality.

Bhoojpuri actor and BJPs sitting North East MP Manoj Tiwari has also to engage effectively with netizens as the polling date draws near. As many as 164 candidates are in the fray in Delhi, where the polls is largely being seen as a triangular contest among the AAP, BJP and the Congress. Of the over 1.43 crore voters in Delhi, 78,73,022 are male and 64,42,762 female, while 669 belong to the third gender. The number of overseas electors stands at 40 while count of service voters is 11,005.