The Supreme Court on April 12 directed all political parties to furnish receipts of electoral bonds and details of identity of donors in a sealed cover to the Election Commission by May 30.

The order, pronounced by a bench comprising Chief Justice Ranjan Gogoi, was in response to a plea of an NGO that challenged the validity of the scheme. The petitioner sought that either the issuance of electoral bonds be stayed or names of donors be made public to ensure transparency in the poll process.

The development comes days after media reports suggested a huge rise in anonymous funding for political parties through electoral bonds.

What are electoral bonds?

In simple terms, electoral bonds are a means to donate funds to political parties. The Electoral Bond Scheme 2018, launched in January 2018, allows an Indian citizen or a body based in India with a KYC-compliant account to buy these bonds. The bonds are issued in multiples of ₹1,000, ₹10,000, ₹1 lakh, ₹10 lakh and ₹1 crore. One can buy them at designated branches of the State Bank of India (SBI) across India.

The bond functions like a bank note that is payable to the bearer on demand without any interest. A donor can donate the bonds to the political party of their choice. The party can then encash the amount via its verified account within 15 days. 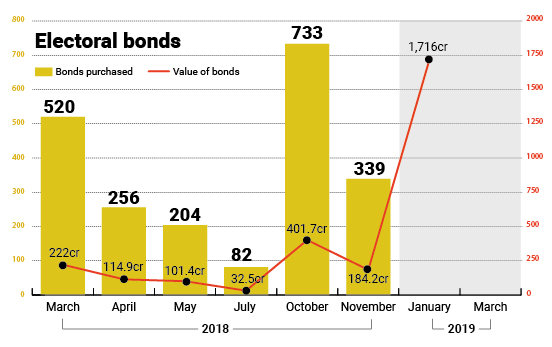 What triggered the buzz around electoral bonds?

Everyone is talking about electoral bonds because there has been a 62% surge in the number of bonds sold in 2019 compared to the previous year. Besides, the benefits have largely gone to the BJP, the party in power at the Centre. This year, electoral bonds worth ₹1,716 crore have been sold, as against ₹1,056 crore in 2018. This was revealed by the SBI in response to an RTI filed by Pune-based activist Vihar Durve.

Nearly 97% of all the bonds purchased so far were in the denomination of ₹10 lakh and ₹1 crore with no demand for bonds of smaller denominations, as per the data. Clearly disproving the claims of political parties that they receive contributions from small donors.

Why is the surge in the sale electoral bonds problematic?

While the electoral bond was introduced to increase transparency in the funding of political parties, it led to controversies because the donors were anonymous. Following protests by the Opposition parties and the Association for Democratic Reforms (ADR) the Election Commission took up the issue with the government.

ADR, that advocates reforms in electoral and political practices, believes that electoral bonds have ‘opened the floodgates to unlimited corporate donations to political parties and anonymous financing by Indian as well as foreign companies which can have serious repercussions on Indian democracy.’

Earlier, the Election Commission had also pointed out that the changes made in several laws relating to political funding will have ‘serious repercussions’ on transparency.

Will the move improve transparency in political funding?

While the Supreme Court has directed the Finance Ministry to reduce the window of purchasing electoral bonds from 10 days to five days in April-May, whether the move will improve transparency in political funding is still being debated.

“We are disappointed with the Supreme Court order. Not only ADR, even the Election Commission in its affidavit has said that it is ‘not sure’ of the source of this money. Is it a case of black money being turned white or is it a case of foreign funding? These apprehensions have been clearly mentioned in the affidavit,” major-general (retd) Anil Verma, National Head of Association for Democratic Reforms, is quoted as saying in the report by The Print.

SC orders that parties receiving anonymous Electoral Bonds will have to disclose donor details to EC. >95% of the 3KCr plus bonds have gone to BJP.Will the BJP disclose donors or will it say that people slipped these bonds under door of BJP office! Will the quid pro quo be known?

The apex court has said that it would fix a date later for final disposal of the petition filed by the NGO.

Which political parties can receive funds via electoral bonds?

Only political parties registered under Section 29(A) of the Representation of the People Act, 1951 and which secured not less than one per cent of votes polled in the last general election to the House of the People or the Legislative Assembly of the State, are eligible to receive electoral bonds.

Cong pokes holes in Modi’s I-Day speech, asks why PM was ‘scared’ to...