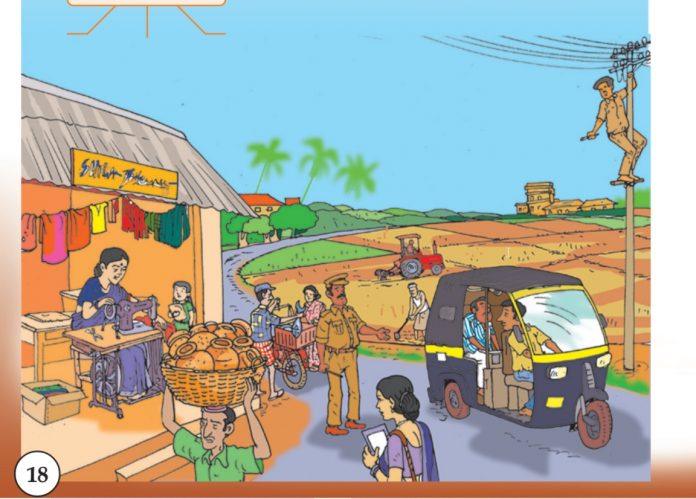 The illustrations speak more than what written words do as far as children are concerned.

The first chapter in a Malayalam textbook for Class One children begins with an illustration about ‘family’. A woman in a saree is feeding a baby as a little girl looks on fondly. Another little girl is feeding the hens. The boy, meanwhile, is playing cricket.

The exercise given to the student is to identify the members of the family and explain what each is doing.   In primary and pre-primary level textbooks, women are almost always depicted as mothers wearing traditional attire, cooking or engaging in other care giving activities.

The father wears a dhothi or trousers, lounges on a chair and reads the newspaper. Boys play football or cricket, while girls water the plants or pamper pets.

“The gender stereotyping and the wrong notions about gendered division of labour are the first things that we teach our children,” said TK Anandi, Gender Advisor to the Government of Kerala. The government has now taken a decision to go for a gender audit of textbooks from the pre-primary to the university level, and revise them as required.

“The idea is to constitute several expert committees to look into the textbooks at different levels — including medical textbooks, which still say homosexuality is an aberration that can be cured,” said Anandi.

As a beginning, a five-member committee to look into the textbooks being taught in Anganwadis has been formed. “The idea is to catch them young,” said Usha VT, former head of the Department of Women’ Studies at Pondicherry University and a member of the committee. “Children start learning gender stereotyping since birth. The boys are fed ideas like they should not cry.”

Talking to The Federal, Usha said there is still a long way to go as there is a need to revisit the syllabus at every level. “We have to train the teachers, too, not just revise the textbooks,” she added.

The gender stereotyping and curriculum discrimination are not unique to Malayalam textbooks; they happen across all languages.

According to RM Amrutharaj, another member of the committee for gender auditing in Anganwadi text books, sexism takes root from the negative representation of women in textbooks as nothing more than mothers, wives and low-status workers.

Also read: Engineering can now be pursued in five regional languages; six more in the offing

Amruthraj, a Specialist in Women’s Studies at the Kerala Institute of Local Administration, has done a PhD at Pondicherry University, on gender discrimination in the Puducherry primary school education system. Having closely examined the textbooks being taught in Tamil Nadu and Puducherry, he observed that illustrations for small kids introducing the idea of labour are highly stereotyped, and produce a very conservative notion about women and their labour.

“The nurses and teachers in the textbooks were consistently women, while doctors, police officers, post persons, pilots, drivers, carpenters and soldiers were all men. These textbooks reinforce the stereotypical image that men dominate the public sphere and women the private sphere. Nursing and teaching are the only paid work done by women other than selling sweets,” Amruthraj wrote in the quarterly journal Primary Teacher published by NCERT.

This trend is seen not only in language textbooks, but also in others, such as maths.

“Babitha bought two packets of red bangles, one packet of black bangles and eight green bangles. Each packet contains 10 bangles. How many bangles did she buy in all?” says an illustrated problem in the first chapter of the mathematics textbook for Class Two students.

“Even in mathematics, boys buy toy cars, spinning tops or balls, but girls always buy bangles or dolls. The illustrations introducing various games too are no different. In such illustrations, boys are illustrated as playing games like cricket or football, but never the girls,” said Anandi.

According to Amruthraj, games and play activities have a significant role in shaping children’s attitude and lifelong orientation towards objects and social processes.

“In the textbooks from standards 1 to 4, boys are shown engaging in outdoor games and activities that include more physical activity, team work and higher level of competition, like football, cricket and hockey. Team leadership, management, group leadership and tasks that involve physical strength are seen as men’s domain, and these are reflected in these gender stereotyped plays.

“Girls are shown engaging in more indoor games which are more sedentary or require lower physical activities, like blind folding, playing with pebbles and sand, and drawing,” observed Amruthraj.

Labour for pay vs labour of love

The ‘invisible’ labour is invisible in textbooks, too. The problem lies not only with what is illustrated and explained. The invisible and unpaid domestic labour being carried out by women go unmentioned in textbooks.

“Women are always portrayed as caregivers and mothers, and they are described as those who cook for the family. Such unpaid and invisible labour remains invisible in the textbooks. The work is just portrayed as an expression of love and care,” said Anandi.

According to a UNESCO report titled ‘The Education of Girls in Asia and the Pacific’, the curricula and materials reinforce the stereotype of dependent and exclusively domestic roles for women. These limited views have been a guiding principle in the treatment of female pupils, it said.

As a result, at both the pre-school and primary school levels, girls lack opportunities to develop spatial skills and perform weakly in technical areas, mathematics and the sciences, it added.

While efforts are being taken to correct the wrongs, education experts unanimously agree that there is a long way to go.