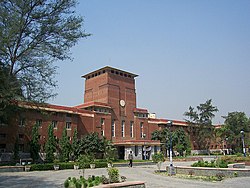 The Delhi University on April 10 said it has undertaken the process of revising its undergraduate programmes, a move that the varsitys teachers association said would mean “greater interference form government”.

The varsity said the process has been undertaken in the light of UGCs Learning Outcome-based Framework (UGC-LOCF). “The revised curriculum will be expressed in terms of outcomes related to knowledge, understanding, skill, attitudes and values. It aims to foster quality higher education in academic research, contributing to society,” the varsity said.

The revised courses are scheduled to be implemented from the 2019-20 academic session. “It is estimated that the revised courses will benefit close to seven lakh undergraduate students who will be seeking admission in 2019; NCWEB, SOL and regular college students will follow the same curriculum,” the varsity said.

The process of revision of undergraduate courses began on March 11 by inviting all deans and heads for a detailed consultative meeting. “Concerns regarding the proposed schedule were discussed and after deliberations the proposed schedule was approved. Consensus emerged on the need to revise the curriculum without any further delay. Participation of students in the curriculum revision process has also been ensured,” the varsity said.

The Under Graduate Curriculum Revision Committee has developed a dashboard to facilitate the process. “A dashboard has been developed to enable concerned teachers to work collectively and to share their inputs simultaneously. Working on the dashboard will create enough opportunities to interact online, thereby reducing considerably need of frequent meetings of members,” the varsity said.

The revision schedule explicitly states different stages of involvement and approval of the revised curriculum from different statutory bodies of the university. “At a later stage, the entire curriculum will be displayed on the university website to invite feedback from all stakeholders like alumni, teachers, parents and academia. Suggestions from experts at national and international level will also be solicited,” the varsity said.

The Delhi University Teachers Association said it has learned that that vice chancellor has “decided to abandon any credible academic application of mind and impose the LOCF that seems to be thoughtlessly derived from a controversial and widely criticised outcome-based model prevalent in state-funded US universities.”

The LOCF will invite greater interference from governments that will be tempted to dictate acceptable outcomes for universities, the DUTA said. “Outcomes-measurement is a huge private industry in US which swallows a significant amount of US education budgets. It will force universities to offer market oriented self-financing courses. The UGC LOCF document also shows a total disregard for the inclusive character and unique priorities of public-funded universities,” it added.