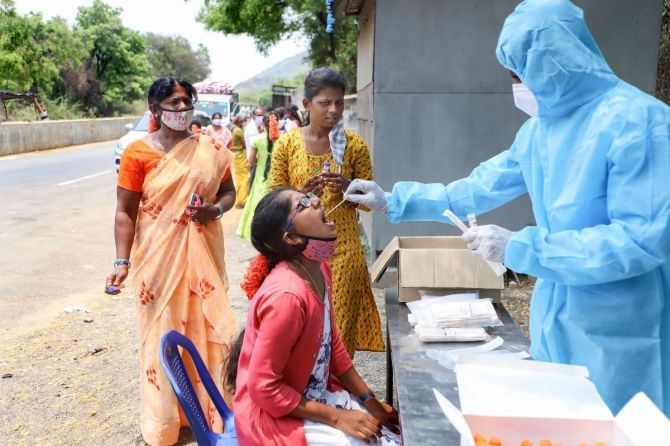 Almost all researchers agree that COVID vaccines certainly reduce the chances of catching the infection. They also contain the suffering — the symptoms are either mild or non-existent in fully vaccinated people.

Even as pandemic-hit countries struggle to vaccinate their populations, there’s much puzzling over why even those who are fully inoculated — with two doses of the COVID vaccine — sometimes get infected with SARS-CoV-2 and its variants.

Such cases — referred to as ‘breakthrough’ infections — happen due to several reasons, said a CNBC report, quoting experts.

The main reason is that none of the first generation of COVID vaccines is 100% effective when it comes to prevention, said the report. These formulations, developed over an unprecedentedly short period amid rising cases and fatalities due to the pandemic, are highly effective in containing the severity of the infection and preventing hospitalisation. But their efficacy when it comes to fending off the infection is not 100%.

The occurrence of new strains of the virus — particularly virulent ones such as the Delta — have further eroded the efficacy of the vaccines, said CNBC.

Also, some of the infections can be attributed to waning immunity from the vaccines. Since the COVID vaccines have been around for less than a year, there’s little clinical evidence on the duration of the efficacy.

There is also some confusion over the efficacy data coming from different parts of the world. An Israeli study published late last month found that the vaccine produced by Pfizer and BioNTech was only 40.5% effective when it came to preventing symptomatic COVID, said the report.

However, said the report, a study conducted in England in April-May found that the Pfizer vaccine was 88% effective against symptomatic COVID, including the Delta variant, after two shots.

While the difference in the results can be attributed to the nature of the vaccination programme, the age groups of the respondents and the time periods, it does create some ambiguity on breakthrough infections data.

Quoting Lawrence Young, a virologist at the University of Warwick’s Medical School in the UK, the CNBC report noted that such infections are a reminder that “no vaccine is 100% effective.” “There will always be a proportion of individuals who will still remain susceptible to infection and illness,” said Young.

What almost all researchers agree on is that COVID vaccines certainly reduce the chances of catching the infection. They also contain the suffering — the symptoms are either mild or non-existent in fully vaccinated people.

The CNBC report said, quoting research from the UK released last week, that fully vaccinated people are “three times less likely than unvaccinated people to test positive for the coronavirus”.

“Analyses of PCR test results in the REACT-1 study — a major coronavirus monitoring programme in Britain led by Imperial College London — also suggested that fully vaccinated people may also be less likely than unvaccinated people to pass the virus on to others, due to having a smaller viral load on average and therefore likely shedding less virus,” it said.

Djokovic back at top of ATP rankings; Sabalen...