In an unprecedented move, a Commanding Officer (CO) from an infantry battalion stationed in Jaisalmer enthusiastically shot off a letter to Bollywood star Sonu Sood requesting help to procure equipment for a COVID-19 facility to be set up by the army.

Is it a case of the Indian army then reaching out to get help from one-man army, Sonu Sood? This unprecedented move by the CO has not just gone viral on social media but this incident has left the Army’s top brass red-faced, said media reports. The Indian Army is not exactly strapped for funds, and the Union Defence Minister, Rajnath Singh has also recently given emergency financial powers to the armed forces to enable them to set up and operate quarantine facilities, makeshift hospitals and procure essential equipment.

In a letter dated May 13, the CO, Col Shiv Shankar Rathi requested Sood to help through Corporate Social Responsibility (CSR) initiatives, to get certain equipment required for a 200 bed COVID facility to be set up at their military station. The equipment they needed was four ICU beds, ten oxygen concentrators, ten jumbo oxygen cylinders, one X-ray machine and two 15 KVA generator sets. 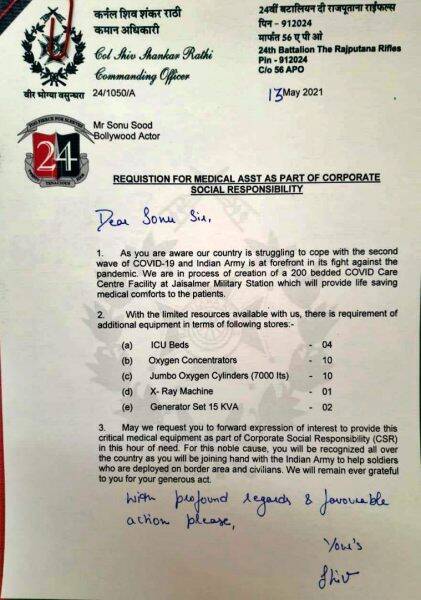 Further, he wrote in the letter that Sood will be remembered for helping a “noble cause” and joining hands with the Indian army and help soldiers deployed in the border and citizens. “We will remain ever grateful to you for your generous act,” he had added.

Indian Express reported that a senior officer in the Army confirmed that this letter had been written to Sonu Sood and said it was done out of “over-enthusiasm”. While some senior Army officers have criticised the officer for not waiting for government funds since there is no scarcity of funds obviously, they added that his intentions were sincere and noble however.

Undeniably, the CO had overstepped the boundaries in his eagerness to reach out to the actor. After all, Sood has been arranging buses to ferrying migrant labourers back home to providing food and medical assistance to the needy in this pandemic and has even set up a helpline in the second wave.

During the second wave of the pandemic, the armed forces have been participating in relief efforts in a big way. The army has set up a cell to coordinate with the concerned civil authorities for all COVID-related assistance work, which is being directly monitored by the Vice Chief of Army Staff.

The army has also deployed considerable medical resources to assist civil authorities especially at the five COVID hospitals already functional or in the process of being established in Delhi, Ahmedabad, Lucknow, Varanasi and Patna, said media reports.