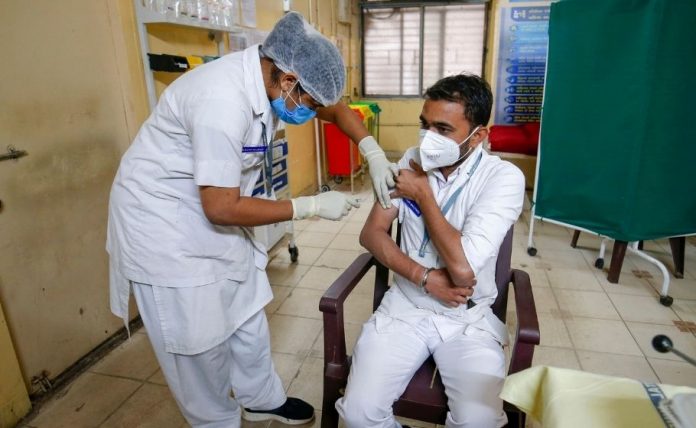 The CoWin website showed a total of 86,16,373 vaccine shots were administered on what was billed as Day 1 of Centre’s new vaccination policy rollout, which coincided with International Yoga Day

India was able to administer a “record” 86 lakh COVID-19 vaccines on Monday thanks to the efforts of BJP-run states – which slowed down the pace of vaccinations in the previous few days in order to be able to deliver shots in a burst, according to a Scroll report.

The CoWin website showed a total of 86,16,373 vaccine shots were administered on what was billed as Day 1 of Centre’s new vaccination policy rollout, which coincided with International Yoga Day.

India’s previous record of 45 lakh doses was on April 5. Since then average daily inoculation had fell below 3 million.

On Monday Prime Minister Narendra Modi said the new vaccination numbers were “gladdening”. “The vaccine remains our strongest weapon to fight COVID-19. Congratulations to those who got vaccinated and kudos to all the front-line warriors working hard to ensure so many citizens got the vaccine. Well done India!” Modi wrote on Twitter.

But according to the Scroll report, data from the Co-Win portal shows that BJP-run states such as Madhya Pradesh, Karnataka, Uttar Pradesh and Assam saw a sharp fall in vaccinations in the days before Monday. This may have allowed the states to deliver the vaccines in a burst and artificially manufacture the ‘record’, the report said.

Madhya Pradesh saw the highest number of vaccinations across all states with 16.9 lakh jabs given on Monday. However, in the previous four days the number of doses administered saw a sharp fall, with only 692 doses delivered on Sunday, CoWin data shows, according to Scroll.

The government started providing vaccines free of charge to everyone above 18 from Monday and took back control of vaccination from states, reversing a policy change that was announced just about a month ago.

It also started the process of buying 75 per cent of the vaccines produced by companies, including 25 per cent assigned to states. Private hospitals will continue to buy the remaining 25 per cent and inoculate those willing to pay for their jabs, Modi had announced earlier this month.

“Central Government is beginning the ‘Free Vaccination For All campaign’ for every Indian from today. The biggest beneficiary of this phase of India’s vaccination drive shall be the poor, the middle class and the youth of the country. All of us should pledge to get ourselves vaccinated. Together we will defeat COVID-19,” Modi tweeted earlier on Monday.

Top 8 places in India for a December Christma...