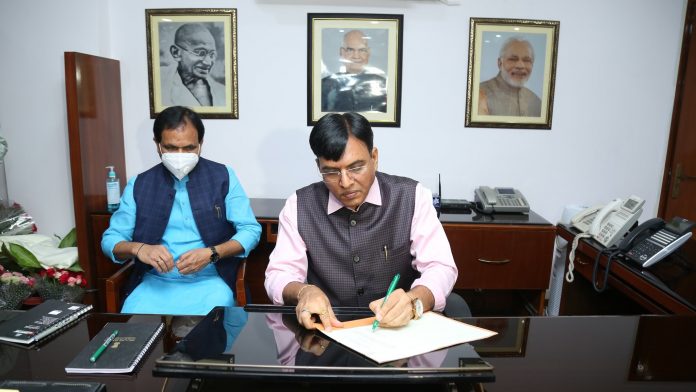 Mandaviya, who took charge of the ministry from Dr Harsh Vardhan after the July 7 cabinet reshuffle, said the states “know very well” about the number of vaccine doses they would receive and also “when they would receive” these doses.

Recently, states like Delhi, Odisha, Madhya Pradesh and Tamil Nadu told the Centre they were running out of jabs once again. Mandaviya responded by posting six tweets in Hindi, accusing the states of ‘mismanagement’ and creating ‘panic among people’ and said the situation ‘can be better understood’ by ‘actual analysis of facts’.

“The Centre informed the states on June 19 about how many doses of the vaccine would be available in July. After this, on June 27 and July 13, states were informed about availability of vaccines every day for the first and second fortnights of July,” Mandaviya wrote.

Tamil Nadu Chief Minister MK Stalin wrote to Prime Minister Narendra Modi complaining that the state is not getting adequate vaccines. He also requested for a special shipment of 1 crore doses of vaccines for the state, and said that the current allocation of 302 doses per 1,000 persons is grossly insufficient.

It has been reported that states like Delhi, Rajasthan, Jharkhand and Maharashtra had to slow down their vaccination rate due to “inadequate supply of vaccines”. Mandaviya said these claims were untrue and said that the number of doses received by states had gone up to ’13.5 crore’ in the month of July from 11.46 crore doses in June. The Centre has also said that 1.54 crore doses of vaccines were still left with private hospitals and states.

Also read: WHO’s warning: COVID not on the wane (as we think); Delta variant rising

The Serum Institute of India, which manufactures Covishield, has announced that the production of the vaccine has been ramped up to 10-11 crore doses in the month of July. It is also focusing on the roll-out of Novavax and the Russian vaccine Sputnik V in India.