Delhi may well be on its way to achieving herd immunity from COVID-19. This optimism stems from the findings of a serological survey conducted by the National Centre for Disease Control (NCDC) in the national capital between June 27 and July 10 to assess the exposure of the virus in the population.

One in every five persons in Delhi was found to have developed antibodies for coronavirus infection. This means that they were exposed to the virus but have recovered. And, most of them did not even know that they were infected.

With a sample size of 21,387, the survey found that 22.86 per cent of the people had developed antibodies, indicating they had been exposed to the novel coronavirus that causes COVID-19 disease. What provides the silver lining in an otherwise dark cloud of COVID-19 is that the virus is not as virulent and lethal as was widely believed. 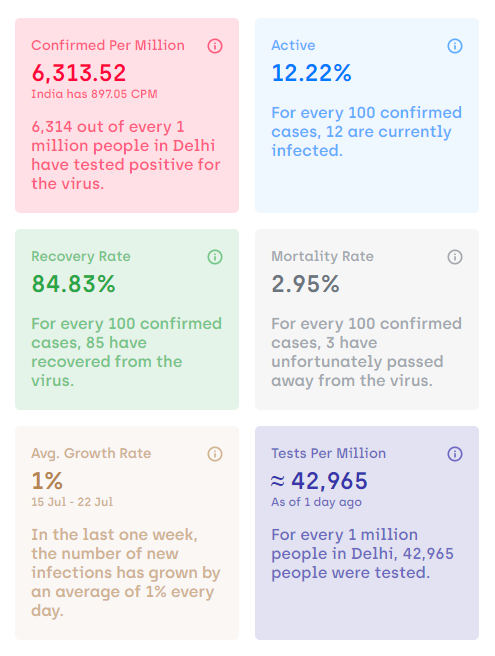 What is serological survey?

A serological survey is done to detect the presence of specific antibodies and is used to assess the prevalence of a disease in the population. The test indicates past infections that triggered an immune response and is not used to detect active infections. In other words, the serological test identifies antibodies created in the immune system of a person who has recovered from a disease.

Every infected person, whether symptomatic or otherwise, develops antibodies against the disease and the detection of these antibodies means the person has been infected with the disease at some stage.

Since it is not possible to test everyone in the population, serological studies are used as a tool to make an estimate of the extent of disease spread in the community. The survey findings mean that 22.86 per cent of Delhi’s population may have been infected and they have developed antibodies and recovered.

However, it could also be argued that a large proportion of the population in the national capital still remains susceptible and containment measures must be continued with full vigour.

In the serological survey, samples were collected at random across 11 districts in Delhi. They were then categorised into two groups, based on the person being above or below 18 years. The results of the survey were released on Tuesday.

The findings illustrate that it is extremely difficult to suppress the spread of this virus, despite a strict lockdown policy. They also mean that the Delhi government’s data was massively under-reported, to the extent of 40 times.

Delhi has reported about 1.25 lakh confirmed cases. If we extrapolate the sero-surveillance survey this means that nearly 50 lakhs of people in Delhi may have been infected. However, the positive takeaway is that the virus has not been as virulent as was feared.

The Good News vs Bad News

But, all is not bad with the above data sets from Delhi’s sero-surveillance exercise. The Infection fatality rate (IFR) is in the range of 0.07 per cent to 0.08 per cent (from the official death toll of 3,600 for Delhi). This implies that the disease is not as infectious as it was thought out to be way back in March based on Wuhan Data sets.

If we take the data on both mortality and seroprevalence as reasonably accurate, then the peak in Delhi has been crossed because the transmission was pushed down by mask-wearing and other precautions such as social distancing. Added to this is the presence of a significant fraction of the previously infected people who are now immune and who may have helped in breaking the chain of transmission at various points.

This has led to a steady decline in the number of cases being reported in the capital in recent days.

“We have not counted the deaths properly and we are under the illusion that our mortality rates are very low. It may be lower than some other places perhaps but I don’t think it is as low as what is, which is lower than influenza. It would be a rate not seen anywhere on the planet and I don’t see why that should be the case,” Ramanan Laxminarayan, epidemiologist and health economist at the Washington-based Center for Disease Dynamics, Economics & Policy (CDDEP), told The Federal.

“We are well on the path to herd immunity. You can look at 23 per cent in Delhi and say this is a failure of the state in controlling the disease which is one way to look at it. No matter what they claim, it is clear that the disease has spread far and wide but the other way to think of this as the good news is that we are closer to the end of the pandemic in Delhi,” he said.

What is herd immunity?

When a large percentage of the population becomes immune to a disease, the spread of that disease slows down or stops. Many viral and even bacterial infections spread from person to person. This chain is broken when most people don’t get or transmit the infection.

This helps protect people who are not vaccinated or who have low functioning immune systems and may develop an infection more easily. When most of a population is immune to an infectious disease, this provides indirect protection—or herd immunity (also called herd protection)—to those who are not immune to the disease.

For example, if 80 per cent of a population is immune to a virus, four out of every five people who encounter someone with the disease won’t get sick (and won’t spread the disease any further). In this way, the spread of infectious diseases is kept under control. Depending on how contagious an infection is, usually 60 to 90 per cent of a population needs immunity to achieve herd immunity.

The Delhi serological survey indicates that that the infection spread is high in India and that this implies that India has behaved exactly the same way as New York, London and Madrid. 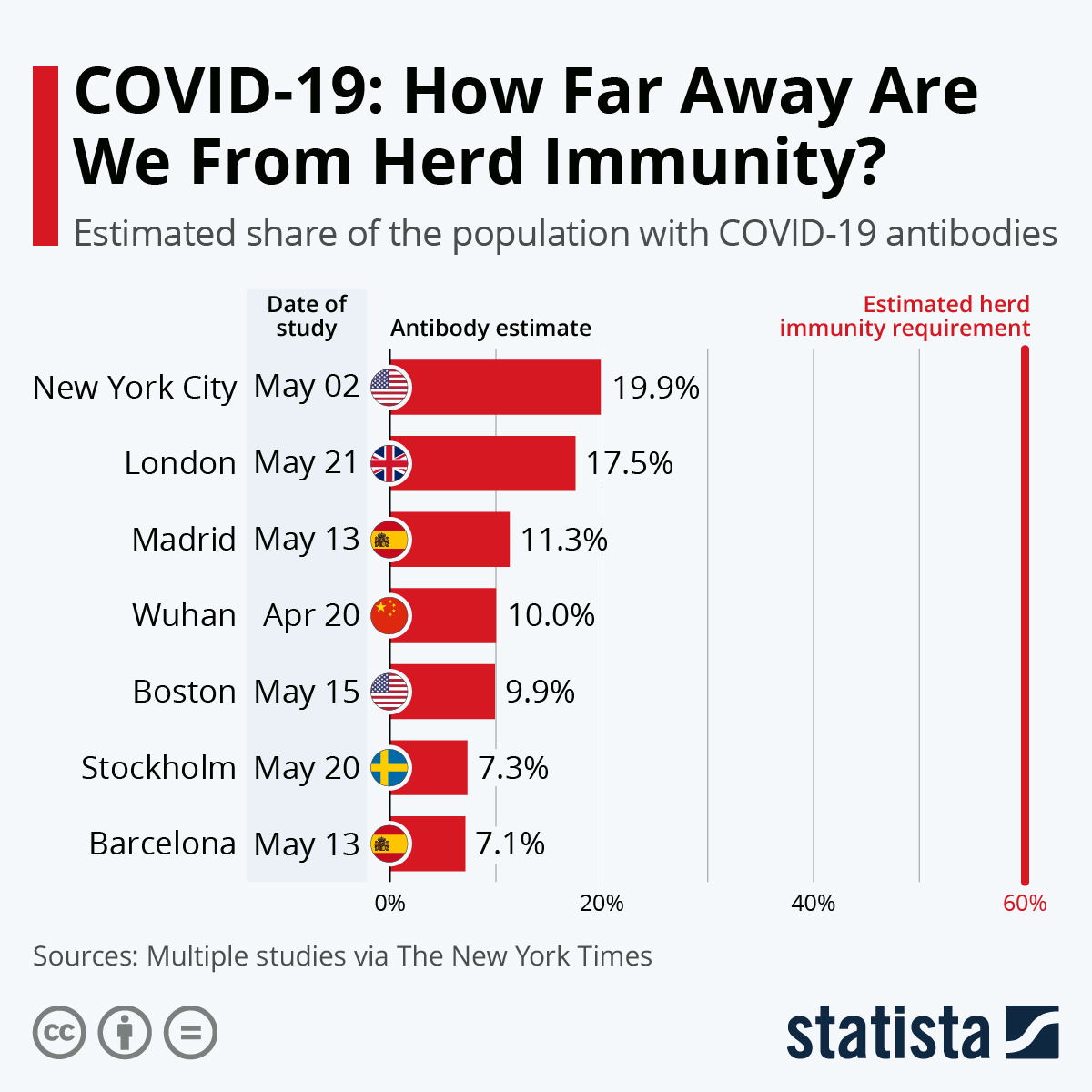 You will find more infographics at Statista

Though we don’t have publicly-available data for countrywide sero-surveillance, if one goes by data that has been shared by the founder and CEO of private Lab, Thyrocare, this trend has been similar across many Indian cities such as Thane, Chennai and Madurai. This is based on a sample size of 74,809 across 65 cities/towns in which the ‘Antibody Positive’ has been indicated in 13,036 samples, which is about 18 per cent prevalence on an average.

“This is very valuable data from Thyrocare. As it is not a federal survey, it is very useful for comparison. The key here is what kit he is using? Obviously, this is important to consider when evaluating the significance of the results” says Dr TS Ganesan, a clinical researcher.

“The precautions that people are taking, including wearing masks and maintaining physical distancing have helped reduce the spread of infection. At this rate, herd immunity is achieved when 25 per cent of the population is infected. But, since the virus is running effectively unchecked, the epidemic will start to slow down but also considerably overshoot the herd-immunity threshold,” says Suvrat Raju, scientist and mathematical modeller from the International Center for Theoretical Sciences (ICTS).