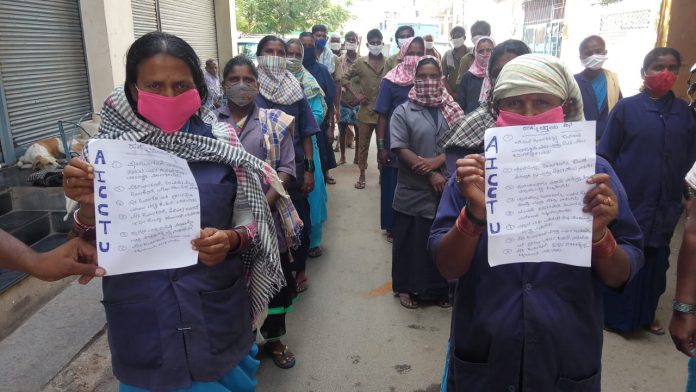 Workers in the unorganised sector had found it hard to cope with the impact of the pandemic last year itself – what with the uninformed lockdown, job losses in the wake of economic slowdown – and now the second wave has only exacerbated their worries.

Many garment industry workers, cab drivers, migrant workers, domestic workers and street vendors among others surveyed by the workers’ unions reported that they have reduced their food intake from three meals to two or one meal a day and barely had enough food stock to last in the current lockdown.

A significant 82 per cent of the respondents stated that the pandemic and government response in terms of the lockdown had adversely impacted their livelihood, said a report by All India Central Council of Trade Unions (AICCTU), Karnataka in collaboration with Garment and Textile Workers Union (GATWU) and Domestic Workers Rights Union (DWRU).

A total of 73 non-migrant workers and 46 migrant workers were interviewed over the phone between May 1 and May 6. And in addition, the coverage in newspapers and significant tweets from Twitter were analysed while preparing the report, the unions said.

About 68 per cent of the cab drivers said they faced difficulties with food arrangements, while 50 per cent said they barely had enough food stock to last the current lockdown. Nearly two-third of them reported that they had to borrow money to meet their food requirements.

One in four migrant workers said their job remained affected post the COVID crisis and they faced challenges in being able to eat three meals a day.

Besides, he said, with the second lockdown, the police brutality increased and they couldn’t even go to the railway station to pick up customers. “I have to pay a loan of  ₹12,000 per month. With interest and dues, it increased to ₹15,000.  Between January to March, I managed to earn at least ₹8,000 and borrowed money from friends to repay the loan. But now, there’s zero earning,” Kulkarni said.

Another driver, Mahantesh Basappa, 44, who left truck driving to work as a cab driver said lack of support from the government only increased their debt and left with no choice, he was on the verge of selling his car.

The report highlighted how the nutritional security of working classes remained severely compromised by the loss and reduction of income due to the pandemic-induced lockdowns, spike in the prices of vegetables and groceries, and inadequate ration supply through the public distribution system. Many have resorted to borrowing loans to meet their food requirements.

Even as the workers took to the streets to highlight their plight on May 19, the government announced a relief package. Karnataka Chief Minister BS Yediyurappa announced COVID-19 relief package of ₹1,250 crore. He said the government will give ₹3,000 each for auto and taxi drivers and construction workers; and ₹ 2,000 for workers in the unorganised sector.

With respect to garment industry workers, the report noted that the first lockdown in 2020 already had a far-reaching impact on the workers. They had witnessed a dip in their earnings, and running at 50 per cent capacity several factories had retrenched their workers.

“Just as work was picking up, the current lockdown has been a nail in the coffin. The lockdown has been necessitated due to the negligence and unpreparedness of the government to take care of health requirements of the second wave. This has further affected the work available and impacted the extent of wages paid,” the report said.

Rukmani VP, the president of garment workers’ union, said during the first wave at least some aid flowed in and ration kits were supplied to many workers. But in the second wave, many have been left in the lurch with no food supplies.  “Many of the workers lost jobs and lived life by withdrawing their provident fund money. But that cannot last forever. And many organisations haven’t even settled dues,” she pointed out.

As per the report, only 53 per cent of the workers knew about the helplines run by the government to provide assistance regarding COVID-19, and among those who knew of the helpline, 86 per cent had never used it.

Meanwhile, thousands of pourakarmikas (waste pickers) in Bengaluru staged protests demanding a rise in wages and basic COVID care materials like masks and gloves. And, some even complained that the residents who tested positive hid information about their health and put the workers at risk.

“The government said they will increase the pay two months ago, but they haven’t so far. We risk our lives and go out every day to pick garbage door to door. But we are not provided with masks even. Everything, we have to buy,” said Sujatha S, a contractual worker in the city’s municipal corporation (Bruhat Bengaluru Mahanagara Palike).

Last year Sujatha had to face stigma and ill-treatment by some residents who even declined to give her drinking water, fearing COVID. “They would treat us like untouchables. But how we do explain to them our daily battle, and how we risk our lives to pick up the waste they throw,” she said on a sad note.