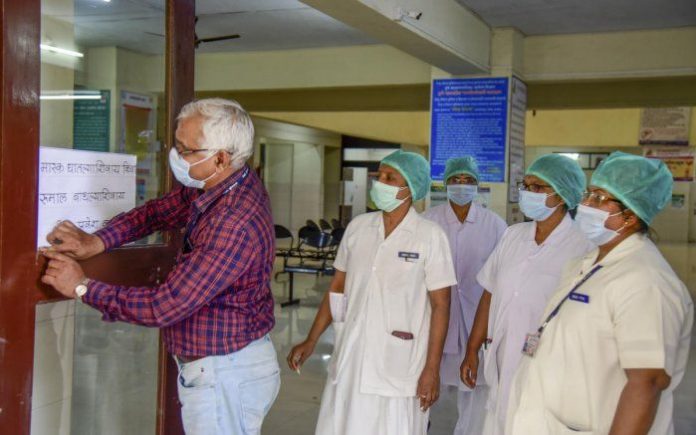 The court hearing was meant to take stock of the overall COVID situation and the preparedness of the administration to handle the crisis. PTI File Photo

A COVID control room of the Pune Municipal Corporation (PMC) on Wednesday (May 12) informed the Bombay High Court during a test call that “no ventilator bed is available” in the jurisdiction of the city. However, five ventilator beds were shown available in the city at the time, according to the dashboard. The PMC administration got into trouble after the test call during the hearing.

The episode took place when the bench comprising Chief Justice Dipankar Dutta and Justice Girish Kulkarni was conducting a hearing on the COVID situation in the city.

PMC counsel Abhijeet Kulkarni presented the preparedness of the PMC administration before the Bench. He also stated that the city has two helpline numbers with 18 lines attached. The bench then decided to take stock of the ground situation. The judges decided to make a test call to the PMC control room. Upon calling, the woman attendant informed the court that no ventilator bed was available at the moment.

The bench remarked after a call that not even the details of the caller (or patient) were taken by the attendant present on the call. It said the present situations require a lot of sensitivity. It asked the commissioner to take further action.

The PMC administration assured the bench that the system would be upgraded immediately. PMC’s legal consultant, Advocate Manjusha Idhate said, “We have assured the court that those working on a dashboard and attending calls in the control room would be given proper training.”

Also read: Pune reels under COVID-19, but Remdesivir’s hard to come by

Currently, the city has 11 government and 196 private hospitals treating COVID patients. The dashboard is expected to update the status of beds in the city while the control room is formed to assist the citizens with the hospital admission processes. An official from a private hospital said that sometimes the hospital had to prioritize patients while assessing their condition. In that case, focusing on the dashboard becomes secondary, he said.

The court hearing was meant to take stock of the overall COVID situation and the preparedness of the administration to handle the crisis. As of May 13, the PMC has 25,222 active cases while 2,393 new cases were added the same day. A total of 4,135 patients were discharged while 50 people died. The total number of cases since the beginning of the pandemic is 4.54 Lakh.

A first in India: Bengaluru to test sewage water for COVID detection...

‘Over 9 lakh COVID patients on oxygen support, over a lakh on ...