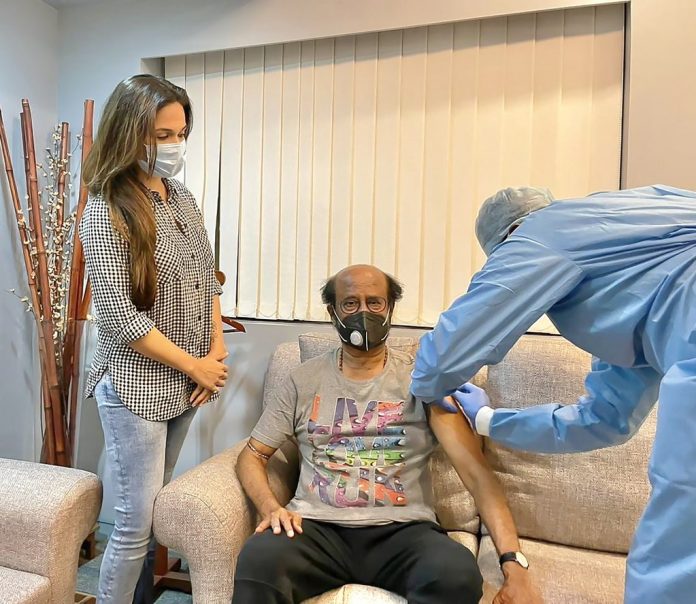 Rajnikanth’s daughter Soundarya tweeted that her father had taken his second shot of the vaccine at a private hospital in Chennai. Let us fight and win this war against coronavirus together, she wrot

Even Superman has a weakness – kryptonite. Rajinikanth, the invincible ‘thailavar’, the one who can bite a moving bullet or can easily vanquish a terrorist in another country with just a Bluetooth, too ostensibly has no defense left against the deadly coronavirus roiling the country. And, decided to wisely take the vaccine to make him immune to the virus!

On Thursday (May 13), Rajinikanth’s daughter Soundarya tweeted that her father had taken his second shot of the vaccine at a private hospital in Chennai. She posted a picture of her father in a grey t-shirt getting a jab from a medical staff clad in protective PPE gear.

“Our thailavar gets his vaccine. Let us fight and win this war against coronavirus together”, she tweeted. While the actor’s contemporaries, Kamal Haasan and Mohanlal posted pictures of their first shot on social media to reduce vaccine hesitancy in the country, Rajinikanth had quietly taken his first shot and had gone off to Hyderabad to resume the shooting of his film, Annaatthe.

He had returned to Chennai on Wednesday (May 12) on a chartered flight after a non-stop 35-day shooting schedule of Annaatthe in Hyderabad. The film, directed by Siruthai Siva is scheduled to release by the end of the year. The shooting was earlier interrupted after a few crew members tested positive for COVID-19 in December last year.

At that time, the actor had blood pressure issues and had to return to his home in Chennai accompanied by his daughter Aishwarya. He was advised complete bed rest by his doctors and his health condition prompted him to back out of entering politics. The actor is expected to start dubbing for this film.

All Rajni memes don’t hit the mark. Last year, when Bollywood actor Ronit Roy had posted that ‘Rajinikanth tested +ve for corona, corona went into quarantine’ expecting to get some laughs, the superstar’s fans turned on him and trolled him saying that this joke was in bad taste. The late singer, SPB however had used a song, Oruvan Oruvan Mudhalali from one of Rajnikanth’s film Muthu, and converted it into a song to fight against coronavirus. Sadly, the singer succumbed to the virus last year.

The 70-year-old actor was earlier this year named as the recipient of Dadasaheb Phalke award – India’s highest film honour – for his contribution to the Indian cinema. The superstar has worked in several critically acclaimed films in many languages. Some of his films include Moondru Mudichu, Mani Ratnam’s Dhalapathy, Baashha, Sivaji, Robot and Chaalbaaz. He was last seen on the silver screen in 2020 in Darbar.

2:48 PM, 26 January, 2023 0
The Ministry has extended the deadline for public feedback on the amendment in question to February 20, 2023, in response to input received from stakeholders. The previous deadline was January 25