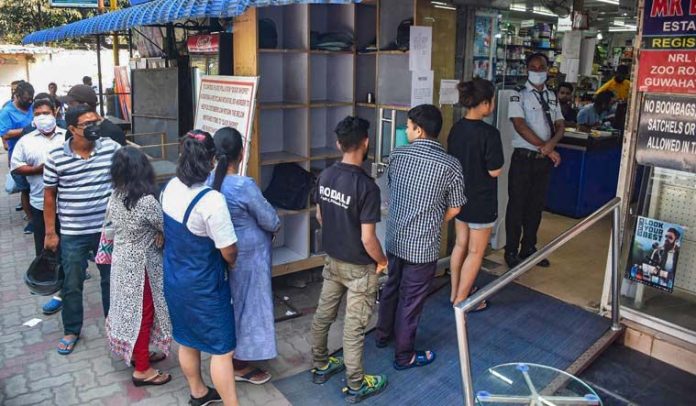 Around 200 ICU beds will also be added in Gauhati Medical College and Hospital by June 15 to ramp up treatment facilities. PTI File Photo

On Tuesday (May 25), eight Indian states reported a rise in COVID cases. Of these six are in North East, reinforcing worry among experts of a faster virus surge there, especially in Assam.

India on Tuesday posted 196,427 new coronavirus cases over the last 24 hours, its lowest daily rise in infections since April 14, while deaths from Covid-19 rose by 3,511.

Along with the data of rising cases in the N-E came a forecasting tool based on data till May 21. Development Data Lab, a research organization working on open data, and a team led by University of Chicago’s Prof Anup Malani, calculate the reproductive rate (Rt) for the Covid-19 outbreak each day. This is a measure of how many people an infected person is likely to infect in a community. The calculations show that the Rt value is greater than 1 for all northeastern states.

An Rt of 1.36, the latest value for Tripura, means 100 cases could increase to over 5,000 in two weeks while an Rt of 0.89 (the value for Karnataka) could reduce 100 cases to 22 in the same period. Of course, if the values change in the interim the scenarios would too.

Meghalaya: The daily case rise went from 95 to over 630 in a month. Its test positivity ratio increased from under five per cent to over 20 per cent peaking on May 17 at over 27 per cent.

Mizoram: Daily cases went from 62 to 150 between April 17 and May 17. It crossed the 200-mark invariably on several days. It also recorded a sporadic decline in active cases.

Nagaland: It saw its daily cases rising from around 30 a month ago to about 275 cases on May 17, crossing the 300-mark on several days in between.

Sikkim: It has shown a very high positivity ratio since April-end. It has stayed in the 30s, recording almost 37 per cent on May 17. Sikkim has consistently reported more than 200 cases a day throughout May.

Arunachal Pradesh: From under 20 on April 17 to over 300 on May 17. Active cases have shown a sporadic decline in recent days. But its case positivity ratio has increased from around three per cent to around nine per cent.

Media reports said officials in Assam are rushing to prepare for a virus surge. Dr Lakshmanan S, the director of the National Health Mission in Assam, told media that the state government was adding 1,000 beds a week to in anticipation of a case spiral.

A total of 200 ICU beds will also be added in Gauhati Medical College and Hospital by June 15 to ramp up treatment facilities for Covid critical patients, Assam Chief Minister Himanta Biswa Sarma said on Monday (May 24).

However, the rate of vaccination has fallen in Assam and the other states. Adding to concerns is confirmation the virus has started spreading to remote Himalayan villages with poor health infrastructure.