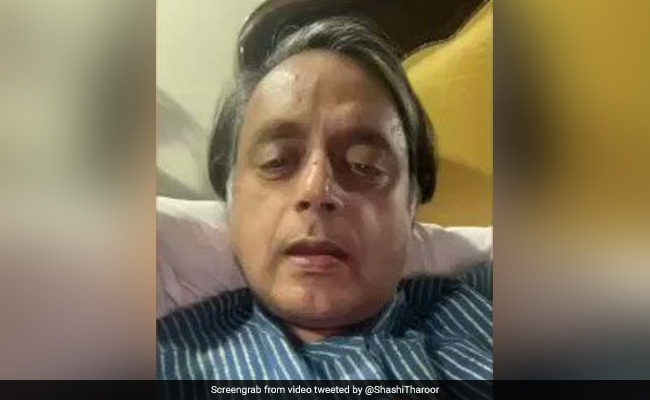 Screengrab from video posted by Congress MP Shashi Tharoor from his sick bed. Tharoor is recovering from health complications induced by COVID, which he contracted in April

Congress leader and Kerala MP Shashi Tharoor may be on a sickbed recuperating from COVID which he had contracted in April, but he remains his loquacious self.

On June 2 morning, he tweeted a sharp video message mocking the government’s vaccine policy. The focus of his message on his nearly two-minute video was to “Save India from Covid. Make vaccines free for all”.

The video has been posted from his sickbed. According to Tharoor, he has been in bed suffering the complications of a long COVID infection. Addressing “everyone” in the video, the Congress MP said after seeing the government’s statement that everybody would be vaccinated by December end, he wondered how the Centre will achieve this ambitious target considering the “availability of vaccines or lack off the vaccines”, reported NDTV.

Last week, while announcing that India’s vaccination drive is on track, Union Minister Prakash Javadekar had emphasised that the government plans to vaccinate all the people by December.

Tharoor added in his video that he stood by the Congress’s campaign demanding a “massive change” in the government’s policy to facilitate universal vaccination of all Indians within the promised deadline of December. He wanted the government to vaccinate all its citizens free of cost.

The 65-year-old leader also heavily criticised the government for its “differential vaccine pricing”, which has become a highly contentious issue. He felt that it was “unacceptable” that this government should be demanding that states, private hospitals and others compete in a free-for-all market to buy vaccines at different prices. While the central government has made a neat arrangement to buy vaccines at affordable prices and give them to the public for free.

“That was the policy at the beginning of the vaccination drive, ” he pointed out, which the Centre changed mid-way. Under the Centre’s new “liberalised” policy, which came into effect on May 1, states can buy upto 50 per cent of their vaccine needs from manufacturers. But the prices were higher than that fixed for the Centre.

Therefore, Tharoor urged the government to implement “a universal, free vaccination policy” to protect its citizens from COVID.

Tharoor then shared his personal experience with COVID and revealed that he had suffered a lot. “I don’t want my fellow citizens to suffer even a fraction of what I have done, and certainly not to do worse than me as so many have as the tragedy unfolded in the country,” he said. In the second COVID wave, India has recorded 2.8 crore COVID cases so far and 3.35 lakh people have succumbed to the deadly disease.

Tharoor is not alone in attacking the Centre over its vaccination policy. The Congress party has been slamming the government over its inept handling of the pandemic, and the slow pace of vaccination. However, on Tuesday (June2), ICMR chief Dr Balram Bhargava assured that one crore COVID vaccines will be available every day by mid-July, or early-August.