While news about the increase in the number of COVID-19 cases, the economic slump, the difficulties faced by people who are from economically weaker backgrounds, and other heartbreaking issues are taking over the internet, a few little kids are doing their bit to spread positivity and help with the fight against COVID-19.

These children have been donating whatever they have saved to the government, thereby keeping the spirit of philanthropy alive in their own little ways and proving that size or age does not matter for one to have a big heart.

Hemant, a four-year-old toddler from Andhra Pradesh’s Vijayawada donated his savings of ₹971 on Monday (April 13) to the Chief Minister’s Relief Fund to combat the coronavirus outbreak.

The boy, who had saved this money to buy a bicycle, handed over the money to state minister Perni Venkatramaiah at a YSRCP office.

Venkatramaiah appreciated the child’s gesture and said he would give him the bicycle for which he was saving the money as a present.

Meanwhile, another five-year-old kid named Megovizo Rino from Jotsoma village of Nagaland has been lauded for his act of generosity. Rino donated his savings of ₹3,150 to the Kohima district administration to help with the relief measures to deal with COVID-19.

He gave the money to the district ADC and the revenue officer in the presence of his father and several other officers.

The boy had originally saved the money over two to three years to buy a battery bike. He had been saving the money given to him by his relatives and other people during birthdays and other occasions.

According to East Mojo, the boy’s father Rokophrezo Rocus Rino explained how his son had gotten the idea to donate what he had. “As a member of the Angami Youth Organization (AYO), my colleagues and I have been volunteering to help the district administration in distributing ration to stranded students. So, when I returned home late after work, my son asked me why I was late. I told him that I was volunteering to help those who are affected by the COVID-19 lockdown. That is when he expressed his desire to help those in need,” he was quoted as saying by East Mojo.

The father said he was touched and happy after hearing his son’s idea. “As a mature person myself, I haven’t thought about doing what he wanted to do, so I feel really good and happy for him,” he said.

The next little hero on the list is five-year-old L Mayan Nongbri from Shillong district. Nongbri donated a sum of ₹1,501 to the Chief Minister’s Relief Fund.

He had also donated his savings earlier to the Chief Minister’s Flood Relief Fund, and had been saving since he made the first donation. A couple of other women contributed to this donation after they heard about Nongbri’s idea.

Nongbri’s father explained how he got the idea to give his savings. “A local newspaper had published a photo of a boy helping his mother in a stone quarry. Mayan, who has a habit of flipping through the newspapers, noticed this and asked about the picture. We informed him of the cause and the consequences that COVID-19 has affected the poor people. This inspired him to donate his savings for the poor,” his father was quoted as saying by East Mojo.

The father added that Nongbri’s mother always encouraged him to share what he had – be it food, toys or sweets.

Appreciating the boy’s kind gesture, Chief Minister Conrad Sangma thanked him and said on Twitter, “Mayan donated Rs. 1501/- out of his piggy bank towards the Chief Minister’s Relief Fund for #Covid_19. This is little Mayan’s second contribution to the Relief Fund since last year. A small boy with a big heart! Thank you Mayan.”

Mayan donated Rs. 1501/- out of his piggy bank towards the Chief Minister's Relief Fund for #Covid_19. This is little Mayan's second contribution to the Relief Fund since last year. A small boy with a big heart! Thank you Mayan. pic.twitter.com/NU4uKzJZtq

Two children in Uttar Pradesh’s Hasanpur set out on pocket bikes to donate a sum of ₹5,000 to those in need during the COVID-19 lockdown, but were stopped by police.

The kids, who ran a YouTube channel, had made a video of this incident while venturing out. 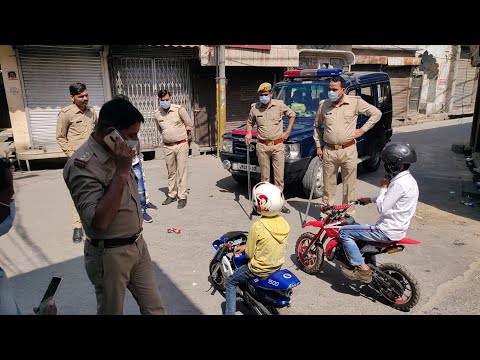 In the video, the children can be seen being stopped by the police and questioned regarding why they were out during the lockdown. The kids are seen explaining the reason and the police take the money after assuring them that they will donate the cash to those in need. The kids are then sent home.

A seven-year-old boy from Mizoram’s Kolasib town broke open his piggy bank and donated his entire savings to fight COVID-19 and feed the poor hit by the lockdown imposed to contain the spread of the disease.

Lalmuansanga handed over a tiny plastic bag containing ₹333 in coins and currency notes to leaders of the task force, he said. His gesture has been appreciated by many including Chief Minister Zoramthanga.

“This tiny bundle contains ₹333 in cash and coins; 7-year-old Rommel Lalmuansanga from Kolasib Venglai donated his entire savings to his village-level task force in this war against the dreaded COVID-19 pandemic,” Zoramthanga tweeted.

This tiny bundle contains Rs. 333/- in cash and coins;
7-year-old Rommel Lalmuansanga from Kolasib Venglai donated his entire savings to his Village Level Task Forces in this war against the dreaded Covid-19 pandemic
May the good Lord bless you abundantly
You are a Hero!#Hero pic.twitter.com/YfGbG9CHDI

Another interesting episode took place around the same time last year. Derek C Lalchhanhima from Sairang in Aizawl district, who was six years old, went to a hospital with a dead chicken and ₹10 in hand. The boy had sought treatment for the bird after running over it accidentally with his bicycle.