Since the Nipah outbreak in 2018, bats have garnered a certain notorious reputation. Adding to that, a recent paper by the Indian Council of Medical Research (ICMR) now claims that the variants of coronavirus are found in the nocturnal animal in India.

Though the study also clarifies that there is no evidence that the virus found in bats can affect humans, their role in propagating the virus is widely debated.

While people all over have developed a dislike for bats with the recent outbreak of coronavirus, in Tirunelveli district in the southern part of Tamil Nadu, bats have been coexisting with humans for many generations without much issues.

Not only this, the bats, which are considered a lesser charismatic species, are mostly found roosting in temples, a place people consider holy in general.

The bat species are of two types, the frugivores (fruit-eaters) and insectivores (meat-eaters).

Related news: Pangolins may have spread coronavirus from bats to humans: Chinese scientists

Indian flying fox (Pteropus giganteus) is the largest bat species found in India and except the rarest bat species — the Salim Ali’s fruit bat (Latidens salimalii) and Wroughton’s free-tailed bat — no other bat species are found in Schedule I of Wildlife Protection Act, 1972, according to researchers. 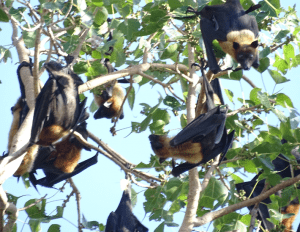 Usually, rock caves are the main habitats of these mammals, but with rapid urbanisation and loss of forests, a number of bats have found refuge in human habitations like the temples of Tirunelveli.

The wonderland of bats, Tirunelveli, has a lot of temples which are more than 1,000 years old. Most of these temples are built in Dravidian architecture which has huge gopurams (towers) with a lot of dark spaces.

Bats being nocturnal found these temples a better place for survival.

Even though the walls and floors of the temples are carpeted with regurgitation, excreta and foul smell due to the bats, the locals visiting the temples regularly have no qualms about it.

According to a study conducted by researchers from Bengaluru-based Ashoka Trust for Research in Ecology and the Environment (ATREE), these bats roost in 38 of the 63 temples in the region.

But in recent years, the number of bats in the locality has started decreasing because of the modernisation of temples with lights and fans.

During the renovation, temple authorities also shooed away the bats and other birds using smoke.

In temples like Nava Tirupati, special teams have been formed to keep the birds away. However, activists rue that it should not be done. 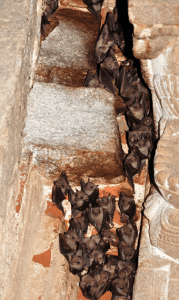 “It is wrong to catch or shoo away the bats. The scientists say that these kinds of activities create stress in the bats and due to which they excrete and urinate. It is possible that from the excretion, virus in their bodies spread,” said M. Mathivanan, a senior research associate at ATREE.

Adding to the problem, Indian flying fox species of bats are also poached by people because of their misbelief that the meat of the bat can cure asthma, Mathivanan added.

Explaining that earlier the human-bat relationship was amiable, Mathivanan who has been studying bats for many years said the chili farmers in the region used guano, manure prepared from bat excreta on their fields as it was considered really good for the crops.

Bat excreta also used to be auctioned by the temple authorities of Annamalaiyar.

Elucidating the vital role bats play in the environment, Mathivanan said besides controlling pests, they help in scattering seeds.

“A large number of trees found today on the banks of river Thamirabharani is because of the bats. The species have the ability to create a forest themselves through pollination and seed dispersion. They also help in the growth of night flowering plants and by feeding on insects, they also act as a guardian of paddy fields.”

The evidence that bats and humans coexisted peacefully for a long time can also be found in the notes of Sangam literature like Natrinai and Kurunthokai.

“We have been living with the bats for many years and never considered them as dangerous creatures. Also, the people in this (Tirunelveli) region have never been affected by any virus like Nipah. More than the virus, people have become averse to bats because of the myths surrounding them” Mathivanan added.

Blaming movies and people’s superstitions, he said people think due to the bad karma, the dead persons are born as bats and hanging topsy-turvy in these temples. Also, in ghost movies across languages, bats have roles to frighten.

“In India, we don’t have any vampire bat species. They are mostly found in South America. But due to vampire films, people have developed an aversion towards bats. It is to be noted that even those vampires drink only animal blood (not human blood),” Mathivanan added.