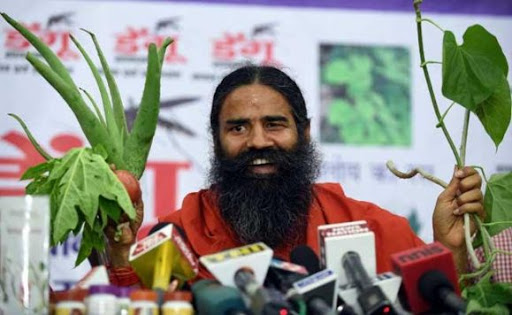 Ramdev is accused of 'belittling the sacrifice of more than 1,200 doctors who have laid down their lives in the line of duty' | File photo: PTI

The Indian Medical Association (IMA) has urged authorities to take action against Ram Kishan Yadav, or ‘Baba Ramdev’, for “spreading hatred and misinformation regarding science” after the ‘baba’ called allopathy a “stupid and bankrupt science” that had caused the deaths of “lakhs” of COVID-19 patients in the country.

Addressing a group of followers recently, Ramdev claimed that more people in India have died of allopathic intervention than have died due to lack of hospital beds and oxygen.

Ramdev then says “some people could raise a controversy over what I am going to say”, before blaming science-based modern medicine for the deaths of lakhs of people. “Lakhon logon kee maut kaa kaaran allopathy hai,” he says.

After the controversial video started making the rounds of social media, the IMA’s Dwarka Branch in Delhi issued a statement condemning Ramdev’s “derogatory words against allopathic science and medical doctors”.

“He [Ramdev] has belittled the sacrifice of more than 1,200 doctors who have laid down their lives in line of duty serving mankind during pandemic,” the statement read.

“Medical doctors are fighting as frontline soldiers and are leaving no stone unturned to help humankind to fight this COVID menace head-on, whereas this self-proclaimed businessman baba is spreading hatred and misinformation regarding science and also damaging crucial doctor-patient relationships.”

The statement added that if the authorities fail to take any action against Ramdev, “we may contemplate stopping work, as according to him we are causing deaths rather than saving lives”.

Last June Ramdev and his company Patanjali had launched Coronil – a herbal concoction – as part of a ‘Covid Kit’ and touted it as a cure for COVID-19.

A day after the launch, reports emerged that Patanjali’s claims of curing COVID were based on interim results from a study featuring just 45 patients. Maharashtra quickly banned the sale of Coronil, and in August the Madras High Court fined Patanjali Rs 10 lakh for “chasing profits” by claiming to have a cure for the disease.

Coronil was relaunched in February 2021 as a “supportive treatment” for COVID-19. Ramdev then claimed that the World Health Organization (WHO) had visited Patanjali and “given Coronil the licence that deems it eligible for sale in more than 150 countries” – a claim shot down by the WHO.

Patanjali’s CEO then clarified that Patanjali had simply received a good manufacturing practice certification from the Centre in accordance with WHO standards.