The onset of the second wave of the COVID-19 pandemic, which has kept India’s daily infections over the 2 lakh-mark over the past few days, has triggered a mad scramble for hospital beds, Remdesivir drug, and medical oxygen among vulnerable states. The absence of the latter has been a major headache for governments as its demand has grown due to an increase in prevalence of shortness of breath among COVID-19 patients admitted to hospitals.  Here’s a lowdown on medical oxygen and why India needs it now more than ever. 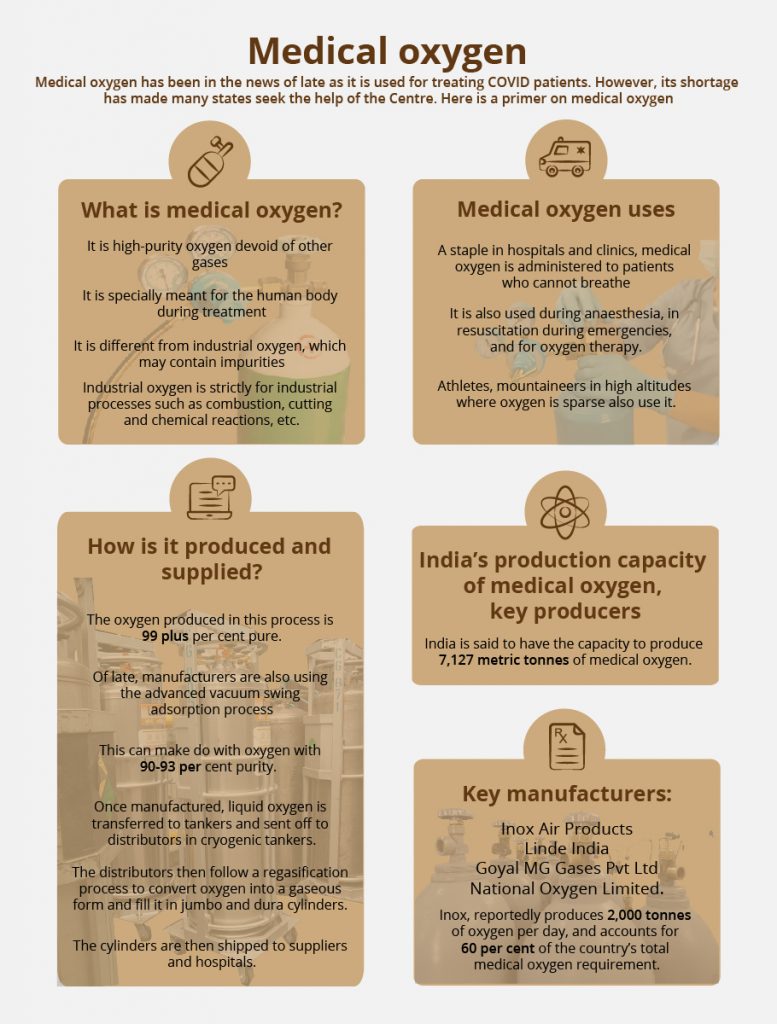 Several states which are tackling a rise in COVID-19 infections due to the onset of the second wave of the pandemic, have complained of running short on medical oxygen which is administered to patients with breathing difficulties, a common symptom of the disease.

The Centre on Monday admitted that a slightly high prevalence of breathlessness is seen among patients in the second wave than in the first one. “About 54.5 per cent of patients require oxygen in second wave against 41.5 per cent in the first wave,” said ICMR’s director general Balram Bhargava.

Union Home Secretary Ajay Bhalla has said that the demand for medical oxygen has risen by almost 60 per cent and is expected to grow further.

According to reports, Maharashtra which has around 60,000-65,000 people or 10 per cent of its 6.38 lakh active COVID patients on oxygen support, has reached its limit of production capacity of 1,250 tonnes. It is borrowing 50 tonnes of oxygen form Chhattisgarh and Gujarat each on a daily basis and 100 tonnes from Reliance’s Jamnagar plant.

Delhi Chief Minister Arvind Kejriwal on Monday said the national capital was facing “acute shortage of oxygen,” and said Delhi’s quota was being diverted to other states and its normal supply reduced when it needs more than it. The chief minister has requested an uninterrupted supply of 700 metric tonnes of medical oxygen to the national capital.

Madhya Pradesh, which has also complained of shortage of medical oxygen, needs 250 tonnes daily. The state which does not have a manufacturing plant ferries medical oxygen from Gujarat, Chhattisgarh and Uttar Pradesh.

What is hampering supply?

The country faces a shortage of enough cryogenic tankers to supply medical oxygen round the clock and on emergency basis. According to reports, it takes more time for cylinders to reach smaller hospitals and those in remote areas. The travel time for a tanker from the manufacturing plant to the hospital has increased from three-five days to six-eight days.

Taking into account the complaints of states, an Empowered Group-2 on COVID-19 of the central government, recently announced that funds under PM-Cares will be used to set up medical oxygen manufacturing plants in 1oo hospitals across the country to make them self-reliant.

The government said it would also import 50,000 metric tonnes of medical oxygen to meet the current demand.

At least 162 pressure swing Adsorption plants, which the Centre had sanctioned under PM-Cares Fund earlier, are being reviewed for early completion.

The Centre on April 18 also put curbs on the supply of oxygen for industrial purposes, except in nine industries where it is an “essential public health commodity”.

Surplus oxygen from steel plants is also being diverted to hospitals.