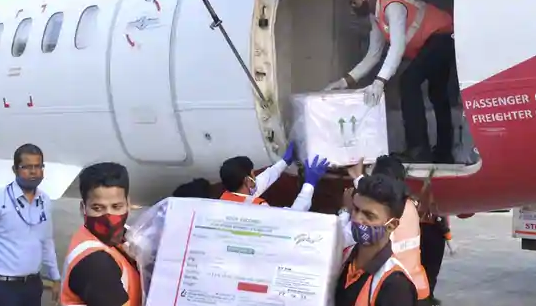 India has successfully leveraged its ‘vaccine hub’ status to its latest initiative of dispatching tons of COVID doses, mainly Covishield, to at least a dozen countries with India’s neighbours — minus Pakistan — having already received the first batch under grant-in-assistance mode.

Media reports said at least 92 countries are in touch with India for Covid-19 vaccines. Sources told IANS that these countries are approaching India as the word spreads that Indian vaccines are showing negligible side-effects, since the immunization drive in the country began on January 16.

IANS reported that in a letter to PM Modi on Tuesday, Prime Minister Roosevelt Skerrit of the Dominican Republic, has requested for inoculation, signally that the demand for Indian jabs has acquired a transcontinental appeal.

“As we enter 2021 and persevere in our fight against Covid-19, Dominica’s population of 72,100 is in urgent need of enough doses of the Oxford-AstraZeneca vaccine. I, therefore, request, with great humility and respect, that you assist us by donating the doses we need to make our population safe (optimally 70,000 first and second doses),” wrote Skerrit.

The latest recipient in the progression to India’s vaccine diplomacy is Brazil – a member of the powerful BRICS (Brazil, Russia, India, China and South Africa) trade block. Brazil’s President Jair M Bolsonaro has expressed its gratitude to India, saying the “country feels honoured to have a great partner to overcome a global obstacle.”

Brazil today (January 23) received two million doses of India-made coronavirus vaccines. The country’s embassy in New Delhi had made arrangements with India and the Serum Institute of India for the vaccines’ transport, following a letter from President Bolsonaro to PM Modi dated January 8.

Brazilian Ambassador Andre Aranha Correa do Lago thanked the SII for the vaccines and the “professionalism demonstrated” during the transportation.

The government cleared commercial exports of COVID-19 vaccines, with the first consignments shipped to Brazil and Morocco. Sources said many Latin-American countries too are in touch with New Delhi for vaccine supplies.

India has at present two vaccines — Covishield and Covaxin. The former is developed by AstraZeneca and Oxford University and is being manufactured by SII. Covaxin is an indigenous vaccine developed by Bharat Biotech in collaboration with Indian Council of Medical Research (ICMR).

In the last few days, India has supplied COVID vaccines to neighbouring countries, including Bhutan, the Maldives, Nepal, Myanmar and Bangladesh. Large consignments of Covishield vaccine doses were flown in special Indian aircraft to Seychelles, Mauritius and Myanmar on Friday.

The Ministry of External Affairs said on Friday (January 22) that the supplies of COVID-19 vaccine as grant assistance to Sri Lanka and Afghanistan will be undertaken after receiving confirmation of regulatory clearances from the two countries.

Supplies are also being readied for Saudi Arabia and South Africa.

The US on Friday praised New Delhi’s efforts, saying New Delhi is a “true friend” which is using its pharma industry to help the global community. “We applaud India’s role in global health, sharing millions of doses of COVID-19 vaccine in South Asia. India’s free shipments of the vaccine began with Maldives, Bhutan, Bangladesh and Nepal and will extend to others. India’s a true friend using its pharma to help the global community,” tweeted the State SCA (the Bureau of South and Central Asian Affairs in US State Department).

India had received requests from over 100 countries for hydroxychloroquine (once thought to help treat COVID-19) and paracetamol (a painkiller), and sent supplies to the US, Brazil and Israel.

India launched the world’s largest COVID-19 vaccination drive on January 16. Companies such as Zydus, Bharat Biotech and Gennova are developing indigenous vaccines. India needs more than a billion doses to protect its own population.

Many countries have reportedly signed ‘vaccine pacts’ with India on a government-to-government basis. Media reports said commercial overseas shipments are likely to start around March.

China recently announced donations to Myanmar, Cambodia and the Philippines. However, it remains unclear whether the free vaccines have been shipped. On Thursday, Pakistan’s foreign minister called up his Chinese counterpart and later told the media that Beijing would donate 5 lakh vaccine doses by January 31.

New Delhi’s diplomatic initiative has its own hashtag – VaccineMaitri, which received encouraging words from Prime Minister Narendra Modi. India is “deeply honoured to be a long-trusted partner in meeting the healthcare needs of the global community,” he tweeted.