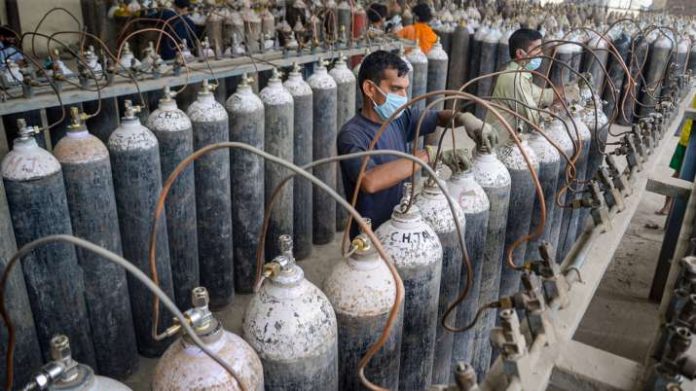 In clear signs of dangerously deteriorating COVID situation in Delhi, the prominent Sir Ganga Ram Hospital in Delhi said in a statement on Friday (April 23) that 25 “sickest patients” have died in the last 24 hours at the hospital.

The hospital in an SOS early morning (April 23) said it had oxygen for only two more hours and that 60 more patients were at risk. Around two hours later, oxygen tankers arrived at the hospital.

Even as Delhi grieved over the new deaths, a private hospital in Maharashtra’s Palgarh was caught in a devastating blaze that killed at least 13 COVID patients. The fire was reported at the intensive care unit of the hospital on the second floor of the four-storied Vijay Vallabh Hospital at Virar around 3am, an official said.

It took firefighters more than two-and-a-half hours to extinguish the blaze, said the official. Virar is over 50 km from Mumbai. There were 17 patients in the ICU when the fire broke out, the official said. Four patients were rescued and shifted to other hospitals.

Delhi’s Ganga Ram Hospital said in a statement: “25 sickest patients have died in the last 24 hours. Oxygen will last another two hours. Ventilators and BiPAP (ventilators for invasive treatment) not working effectively. Resorting to manual ventilation in ICUs and emergency. Major crisis likely. Lives of another 60 sickest patients at risk, need urgent intervention.” The hospital said it needed oxygen to be airlifted urgently.

The hospital’s chairman said there had been a large number of deaths in 24 hours for the first time, but he did not link them to oxygen shortage.

Many hospitals in Delhi have sounded out a crisis of oxygen supply, beds and medicines. The hospitals have approached the Delhi High Court for help. The court has asked the Centre to strictly follow its order to provide medical oxygen to Delhi and ensure safe passage to oxygen without obstructions.