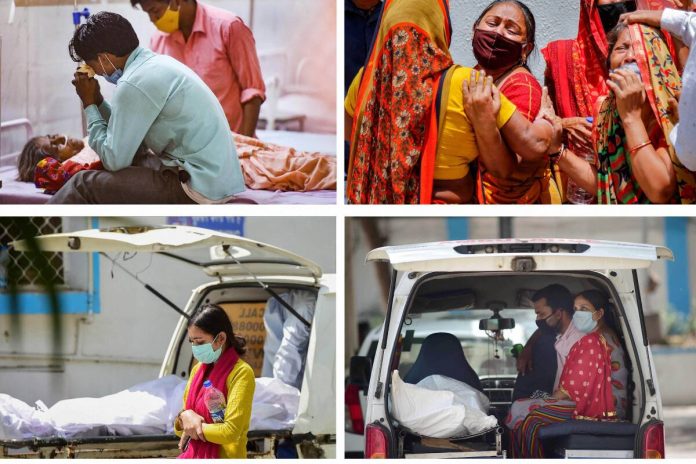 India on Friday (April 23) reported over 3.32 lakh new cases of COVID-19 and 2,263 new deaths in a burgeoning health crisis, which the Supreme Court has termed as “national emergency”. India is next only to the US in the total number of cases reported since the beginning of the pandemic.

In the national capital, hospitals are suffering from acute shortages despite strict government orders to ensure uninterrupted production and supply of medical oxygen, Apollo Hospitals Joint Managing Director Sangita Reddy said on April 23. She was responding to a tweet from Max Healthcare, which said that Max Smart Hospital and Max Hospital Saket were left with less than one hour’s oxygen supplies.

“Hospitals continue to gasp for breath despite govt orders being issued. It’s now becoming an hourly challenge for many hospitals. Every minute of delay on commitments made can cost lives!!,” Reddy tweeted tagging Union ministers, the Delhi chief minister and other state ministers.

Worst-affected Maharashtra on April 22 reported 67,013 fresh cases, taking its tally to nearly 41 lakh. The state is followed by Kerala, Karnataka, Tamil Nadu and Andhra Pradesh. In its biggest single-day spike, Kerala on April 22 reported 26,995 cases and Karnataka over 25,000 cases. Bengaluru has over 1.37 lakh active cases.

Delhi reported its highest fatality figure of 306 with over 26,000 cases in 24 hours. In neighbouring Haryana, all shops will be shut from 6pm on April 23 with all non-essential gatherings banned.

In the North-East, Assam’s cases rose to over 2.31 lakh on April 22 as 1,931 more people tested positive. Ten more people died in the state, pushing the total fatalities to 1,160.

The Supreme Court on April 22 called the current public health crisis a “national emergency” and asked the Centre to make a national plan on oxygen supply, drugs and a method of vaccination.

Taking cognisance of the crisis, the apex court asked the Centre to furnish within 24 hours a plan to augment supply of oxygen and medicines. The Delhi High Court said the government should create an oxygen corridor and ensure protection to vehicles carrying oxygen cylinders.