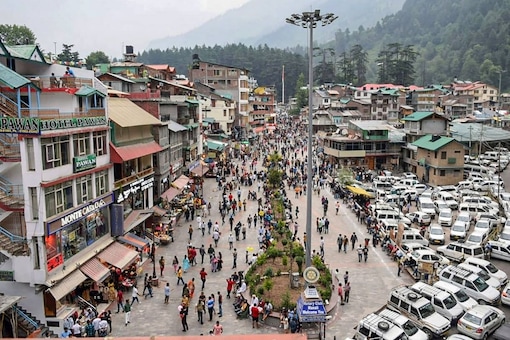 After the HP government had lifted COVID-restrictions in mid-June, many tourists headed to cooler climes like Kulu-Manali, Shimla and Dharamshala. PTI photo

As thousands of tourists flock to hill stations after COVID-19 restrictions have been eased following months of lockdown, the Union Health Ministry has said that the pictures of crowds in these places were “frightening” and urged people to follow COVID-19 appropriate behaviour.

On Tuesday (July 6), Dr Balram Bhargava, DG, ICMR, told the media at a press briefing that “pictures from hill stations are frightening. People must comply with COVID-appropriate behaviour.”

Quoting a source, CNN-News18 report added that the Union Health ministry had also written to the Himachal Pradesh (HP) government warning them against blatantly flouting COVID safety norms in places like Shimla and Manali.

After the HP government had lifted COVID-restrictions in mid-June, many tourists headed to cooler climes like Kulu-Manali, Shimla and Dharamshala.

As the HP government opened its borders, within a matter of few hours, vehicles had started piling up at the entry points. But, as the images of people-dense streets in these hill-stations started to surface, the health authorities were concerned.

The CNN-News18 report added that Lav Agarwal, the joint secretary in the health ministry, raising this issue warned that the authorities will impose the restrictions once again if protocols were not complied with in hill stations.

The police in Shimla had earlier warned people to follow COVID-protocols or they would have to serve a eight-day jail sentence. Hotels had also been told to follow standard operating procedures (SOPs), such as wearing of masks, proper sanitisation and avoid overcrowding so that tourists feel safe and comfortable.

The second wave which peaked in the country in April and May is yet to subside completely. However, after vaccination efforts have been augmented and lockdowns were used to bring  down the infections, people have started to throw caution to the winds again.

Despite the fact that experts are time and again releasing reports predicting that a third wave of COVID-19 is around the corner. The recent SBI research report has confirmed that the third wave is likely to hit by mid-August, while Reuters has said that  it will happen in October.