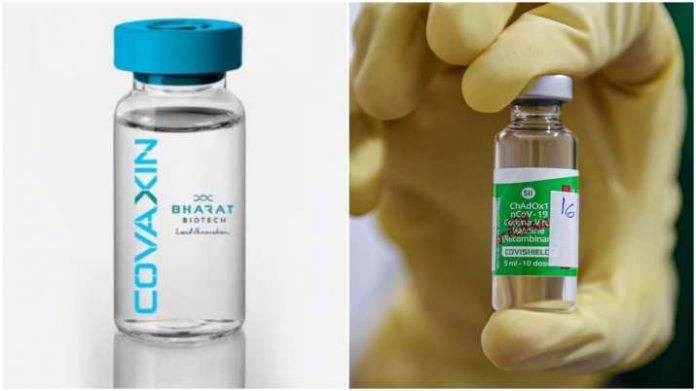 The study has not been peer-reviewed, so should not be used to guide clinical practice. Pic: PTI

A pre-print study based on real-world data among health care workers in the country has found that after two doses, Covishield vaccine produces more antibodies against spike protein of Sars-CoV-2, the virus causing COVID-19 than Covaxin.

Data of 552 vaccinated health care workers, across 21 cities in 13 states was analysed from across India between January and May 2021, of which 425 had taken Covishield and 90 took Covaxin vaccine.

Seropositivity rates to anti-spike antibody were significantly higher in Covishield recipients compared to Covaxin after the first dose, the study said.

Also read: Covaxin vs Covishield: Govt to use these parameters to assess vaccines

The study has not been peer-reviewed, so should not be used to guide clinical practice. It said that both vaccines – Covishield and Covaxin – elicited a good response after two doses, but seropositivity rate and median anti-spike antibody were significantly higher in Covishield.

“Among the 552 HCW (325 male, 227 female), 456 and 96 received the first dose of Covishield and Covaxin respectively. Overall, 79.3 per cent showed seropositivity after the first dose. Responder rate and median (IQR) rise in anti-spike antibody were significantly higher in Covishield vs Covaxin recipient,” the study said.

The study involved those healthcare workers who have been administered either of the two vaccines, Covishield and Covaxin, and are with or without past history of SARS-CoV-2 infection.

“This ongoing, pan-India, cross-sectional, Coronavirus Vaccine-induced Antibody Titre (COVAT) study is being conducted among HCW, with or without past history of SARS-CoV-2 infection. SARS-CoV-2 anti-spike binding antibody is being assessed quantitatively at four time points between 21 days or more after the first dose to six months after the second dose,” the study said.

However, the conclusion of the study said that both the vaccines have elicited good immune response.

Serum Institute of India (SII) is locally producing Oxford-AstraZeneca vaccine under the brand name Covishield, and Covaxin is co-developed by Bharat Biotech and the Indian Council of Medical Research (ICMR).

The primary aim of the researchers was to analyse antibody response following each dose of both vaccines and its correlation to age, sex, blood group, body mass index (BMI) and comorbidities.

“While no difference was observed in relation to sex, BMI, blood group and any comorbidities; people over 60 years or age or those with type 2 diabetes had a significantly lower seropositivity rates.”

The research was led by Dr Awadhesh Kumar Singh, consultant endocrinologist, GD Hospital and Diabetes Institute, Kolkata. However, fewer post-vaccination infections, also known as breakthrough infection, were seen in health care workers who took Covaxin, corroborating the other possibility of the vaccine having better cell-mediated response.