A dry run, or a drill, ahead of the actual rollout of the COVID vaccination programme in India will get under way from Saturday (January 2). The government said on Thursday (December 31, 2020) that the aim of the dry run is to ‘assess operational feasibility, to test the linkages between planning and implementation, and identify the challenges and guide the way forward prior to actual implementation.’

The dry run comes at a time when the number of fresh COVID cases in December came to a six-month low with the lowest deaths since May. About 8,24,000 cases were detected in December, a decline of about 35 per cent from the November tally. Since June, the December caseload for the first time remained below the 10 lakh mark.

In the run-up to the full-throttle vaccination plan, the dry run will entail testing in all state capitals in at least three session sites. [A session site is where there will be user interaction]. Some states can also include districts that are located in difficult, remote terrains with poor logistical support, a Health Ministry official said on Thursday. Kerala and Maharashtra may plan the dry run in big cities other than their capitals, the official added.

In the proposed drill, the medical officer in charge will identify 25 test beneficiaries (healthcare workers). For ensuring enough space, states and UTs have been told to carry out physical verification of the sites. Logistical arrangements, including internet connectivity, power supply and safety norms would be overseen for demonstration.

The model sites will have separate entry and exit in a ‘three-room set-up’ with space outside for the purpose of generating awareness along with fully trained vaccination teams, the health ministry said.

The Subject Expert Committee (SEC) under the Central Drugs Standard Control Organization (CDSCO) had met on Friday (January 1) to decide on the emergency use authorisation applications of three companies — Pfizer, Serum Institute of India, which is manufacturing the Oxford-AstraZeneca vaccine Covishield, and Bharat Biotech, which is manufacturing Covaxin.

Also read: WHO clears Pfizer-BioNTech coronavirus vaccine for emergency use

Trial data from SII is being studied by the committee. The vaccine has been developed by the University of Oxford and AstraZeneca. It received regulatory endorsement in the UK on Wednesday (December 30).

The government has made it known that it would like to start the vaccination plan this month itself. A Times of India report said about 96,000 vaccinators have been trained for the vaccination plan. All state and UTs have been told to arrange the ground staff along with IT systems for the largest-ever campaign that aims to cover 30 crore people on a priority basis.

Here are the vaccines candidates likely to be considered in India: 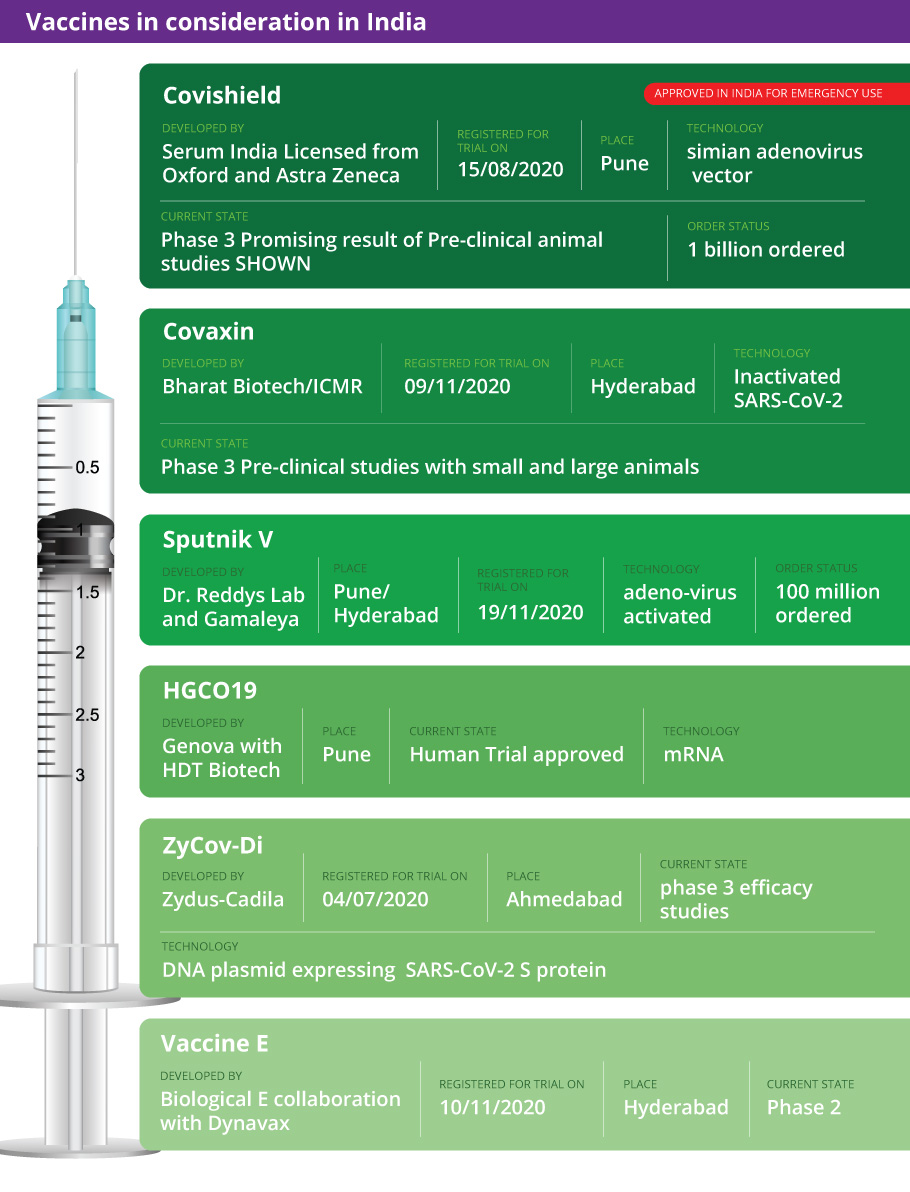