As Chennai has been seeing a rise in COVID-19 cases during the lockdown imposed from June 19, contact tracing, an important part of the fight against the pandemic, is becoming an uphill task.

Recently, Akshat (name changed), a resident of Kodambakkam, a neighbourhood in Chennai, had to contact the zone officials of Greater Chennai Corporation, at least a dozen times, to get him and his neighbours tested.

A family of three nearby had tested positive and being their extended contacts, Akshat had to run from pillar to post to seek the civic body’s attention. He says, “We all had been helping the family with meals since they were unwell for a few days before they tested positive.”

Contact tracing has become a Herculean task, since the numbers have been piling up for over a month now. The city alone accounts for 42,752 cases of the 62,087 reported, till June 21.

While every zone in the Greater Chennai Corporation has officials like sanitary inspectors tracing the contacts — family and extended — they are also helped by a set of volunteers from a call centre set up at the Corporation office and the police. A source from the Corporation admits that it has become impossible to look at every contact since the cases have been rising. Added the source, “We have to first look for the high-risk group which is the family first, as they are the ones being exposed to the infection the most. The extended contact is checked only if they are people with comorbidities or showing symptoms.” 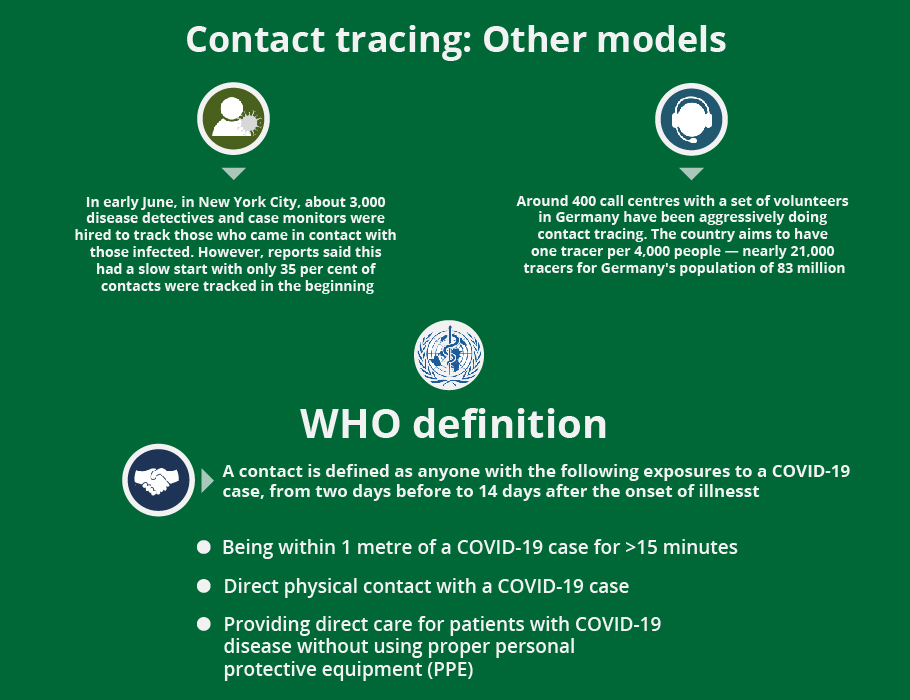 Dr. Pradeep Selvaraj, who is part of the call centre at the Corporation, explains that they have trained the officials from the corporation to ensure that no one gets left out. “We have to contact-trace everyone the infected person has interacted with from the first date of the person showing symptoms. For asymptomatic, it is from the date when the sample was taken for testing,” he added.

Dr. Prabhdeep Kaur, Deputy Director, ‎National Institute of Epidemiology and a members of the expert medical panel of the Tamil Nadu government, says the human component is of importance — from getting the person’s contact history in detail to the past few days of their interaction. The group is divided between high-risk and non-high-risk groups. The family is part of the first group and the second includes neighbours, colleagues and those whom they interacted with outside. She explained, “Say for example, they test positive on the fourth day after they began showing symptoms, you have to go back seven days from then. The family, workplace, public places and shops have to be covered, depending on the person. A homemaker, who doesn’t step out, will not have many contacts. On an average, it is about 10-15 people. Tamil Nadu, till about end of April, had been tracing 15-17 persons per case and this is a good number.”

Effective contact tracing has been marred by fear and misconception among people, pointed out Gladston Xavier, Associate Professor, Department of Social Work, Loyola College, Chennai, who is involved with the COVID-19 Tele Counselling Center, run by the social workers and the Corporation. He said, “Stigma and misconception are still prevalent and this has been making people wary about divulging details. There are people, who have been infected, getting evicted from their homes and accommodation. The stigma has made some wary of divulging any information of the people they have been in touch with. We find people providing false addresses of the contacts and these make the tracing process all the more difficult. There is a need to address these factors. We have to admit that 100 per cent contact tracing is not happening.”

Xavier also says that with a huge team reaching out, some are probably tired of repeated enquiries from all quarters. “The police call them, sanitary inspectors get in touch and then the counselling centre social workers call them too — so by the end of it they are fed up,” he said.

Experts add that there has to be a dedicated and well-trained team in place, in a seamless process. Deepa Mohan, Senior Scientist and Head of the Department, Epidemiology, Madras Diabetes Research Foundation, says, “These shouldn’t be medical professionals, but healthy volunteers who are well aware of the factors that need to be considered. Community support plays a huge role.”