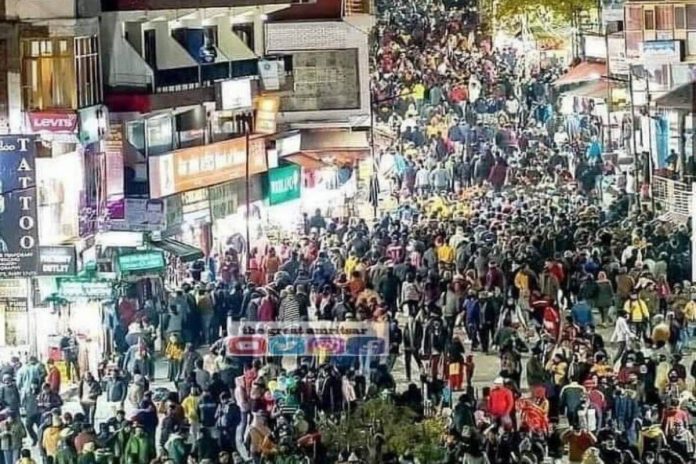 Viral videos of large crowds at a holiday destination in Himachal Pradesh have prompted the Centre to once again warn Indians against disregarding COVID-19 protocols.

The Ministry of Health on Friday said the videos of crowds in Manali were a “cause for concern”, and reminded people that the coronavirus spreads aggressively in crowded places.

#3rdWave
Corona loves the way humans forget the lessons from past experiences.#Manali pic.twitter.com/xnI2TrhwAo

To drive home its point the government also referred to the spike in cases in the United Kingdom, where 60,000 were allowed in to London’s Wembley Stadium for the semifinals of the 2020 European football championship, and another 60,000 are expected for the final on Sunday.

Between Tuesday and Wednesday, England saw a 13 per cent spike, or 3,848 increase in new cases.

Experts fear a potentially massive increase in the days and weeks after the final – England’s first in a major tournament in 55 years. The semi-final victory was celebrated by thousands of fans partying in pubs and streets with no thought to social distancing.

In India, sports activities and crowds at stadiums were tightly controlled in the initial phases of the lockdown but, as different states ease restrictions, these too are now being opened up.

The India-England series earlier this year started out with crowds at stadiums; a record attendance of nearly 60,000 was reported from one T-20 match in Ahmedabad. But as the second wave started to take hold, fans were banned from attending other matches.

After UP debacle, Himachal outcome tastes as ...

6:30 AM, 8 December, 2022 0
Left party plans open-air sessions by experts, door-to-door dissemination of information on social reality, and mass distribution of leaflets to debunk “divisive” narratives of BJP and RSS