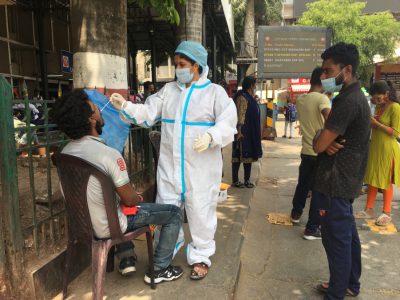 Prime Minister Narendra Modi on April 16 said that the Kumbh Mela “should now only be symbolic amid the coronavirus crisis.” Massive gatherings of pilgrims along the banks of the Ganga in Haridwar in the last few days have led to a sudden jump in COVID cases in the holy city of Uttarakhand.

A prominent order of seers has distanced itself from the Mela and has said the April 27 ‘shahi snan’ would be limited to a few sadhus and seers. There are reports of divisions among various orders (akharas) about keeping the crowd for what could have a spectacular event along the banks of the Ganga. A sect head died of COVID on Thursday (April 15) and many others tested positive for the virus after attending the festival.

In a tweet, the Prime Minister said he had spoken to a top seer, Swami Avdheshanand Giri of Juna Akhara, over the phone. “I appealed that two ‘shahi snan’ have taken place and Kumbh (participation) should now be kept symbolic. This will give a boost to the fight against this crisis,” Modi tweeted in Hindi.

Responding to PM Modi’s appeal, Swami Avdheshanand replied in Hindi: “We respect PM Modi’s appeal. Saving lives is sacred. I request people not to gather for the ritual bath in large numbers and follow all COVID protocols.”

Of the fresh cases, Maharashtra reported 63,729, followed by Uttar Pradesh (27,426) and Delhi (19,486), according to the data. All three states registered the highest daily spike in the number of coronavirus cases since the outbreak of the pandemic last year.

The number of active coronavirus cases in the country has surpassed the 16-lakh mark, the ministry’s data updated at 8 am showed. Registering a steady increase for the 38th day in a row, the tally of active COVID-19 cases has climbed to 16,79,740 in the country, accounting for 11.56 per cent of its total caseload, while the national COVID-19 recovery rate has dropped to 87.23 per cent.

The number of people who have recuperated from the disease has gone up to 1,26,71,220, while the case fatality rate has further dropped to 1.21 per cent, the data stated.

Also read: Pune reels under COVID-19, but Remdesivir’s hard to come by