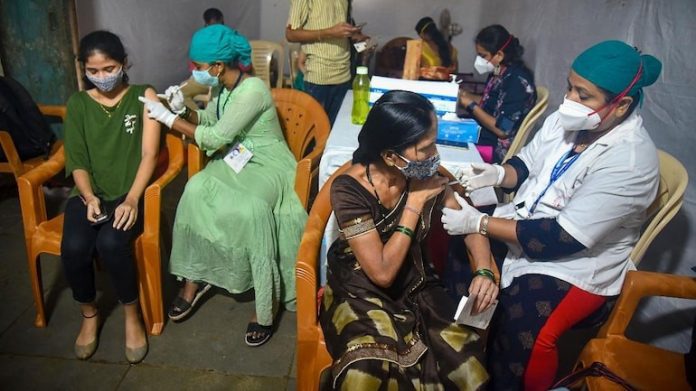 The Union health ministry had harboured grand plans to achieve 100 crore inoculations of the COVID-19 vaccine by October 7 to coincide with the day Prime Minister Narendra Modi was sworn in as Gujarat Chief Minister in 2001. But the country seems to have missed this significant target as the pace of its vaccination programme slowed down after more than two crore vaccinations were achieved to celebrate PM Modi’s birthday.

As of today (October 17), the daily moving average of vaccinations has gone below 50 lakh doses a day. And, this is far below if India needs to achieve this milestone.

The seven-day moving average (MA) is calculated as the average inoculations over the last seven days from any given day on the timeline. The moving average of the country was constantly on the rise until mid-September. However, it gradually declined after September 25 to reach 46.37 lakh jabs on Sunday (October 17), shows the data. This is the result of a declining number of daily vaccinations in the country.

As of October 17, India has administered a total of 97.65 crore doses of the COVID 19 vaccines. This is nearly 2.34 crore short of the hundred crore target. However, with the current pace of about half a crore vaccinations per day, the country might be able to achieve the target by next week. Out of the total vaccinations, about 69.30 crores were first doses while the remaining 27.93 crores were second doses. Over forty lakh doses were administered on Saturday.

Where do states stand?

Maharashtra and Uttar Pradesh are clearly leading the vaccination drive for months. The two states were among the worst affected during both waves of the pandemic. Three states – Maharashtra, Uttar Pradesh and Gujarat – have each fully vaccinated over two crore individuals. Karnataka will soon join them as it has completed 1.98 crore full vaccinations.

A completely vaccinated person is one who has taken both doses of any government-approved COVID-19 vaccine.

A total of eleven states have managed to completely vaccinate over one crore individuals. These states include Rajasthan, Madhya Pradesh, Andhra Pradesh, Tamil Nadu, Kerala, and Bihar apart from those mentioned in the previous paragraphs.

According to the latest government update, the health ministry has supplied over a 100 crore vaccines to the states and union territories since January 16. A total of 101.51 crore vaccines have been supplied to date, while a balance of 11.12 crore vaccines remain with the government.

Under the new phase of immunisation, the Centre is procuring and supplying 75 per cent of vaccines free of cost to the states.