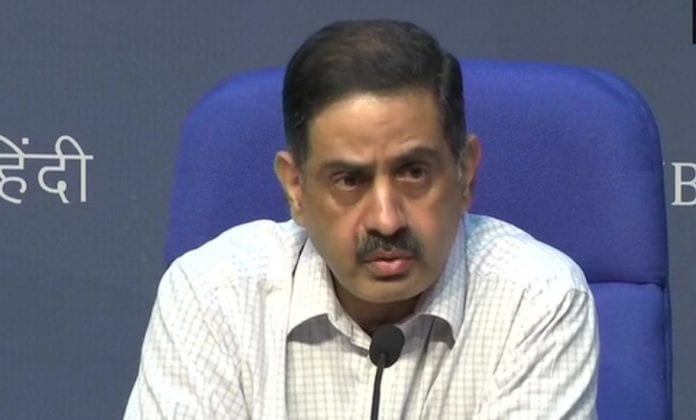 Dr Balram Bhargava attributed the decline in cases to increased testing and strict containment, and said it was critical 'to find a way to ease lockdown - very gradually, very slowly' | Photo: Twitter

One crore COVID-19 vaccines will be available every day by mid-July or early August, the director general of the Indian Council of Medical Research (ICMR) said on Tuesday.

Dr Balram Bhargava said he did not expect shortage of vaccines in future as existing manufacturers are scaling up capacity and newer ones are in the process of bringing shots to the market.

“There is no shortage of vaccines. This [shortage] is what you feel if you want to be vaccinated within a month. Our population is four times that of the United States. Need to have some patience… by mid-July or early August, we’ll have enough doses for a crore a day,” he said.

“By December we hope to have the whole country vaccinated,” he said, reiterating the promise made by the Centre to the Supreme Court on Monday.

India is currently producing around 8.5 crore doses per month, or about 28.33 lakh per day, the Centre told the Kerala High Court last week, adding it expected production to increase by July.

Covishield and Covaxin are being made in India, with Sputnik V production also starting.

India on Tuesday morning said it had recorded 1.27 lakh new COVID-19 cases in the previous 24 hours, the lowest daily increase since April 9. The second wave saw a peak of over four lakh new cases a day.

Dr Bhargava attributed the decline in cases to increased testing and strict containment, and said it was critical “to find a way to ease lockdown – very gradually, very slowly”.

Check out the most exciting music festivals h...