Online marketplaces are making a difference to farmers in the states they are active in, such as Bihar, Madhya Pradesh, Rajasthan, Gujarat and Maharashtra. But, they have not been able to make headway in Punjab and Haryana due to the proliferation of regulated mandis, says Mark Kahn, Managing Partner, Omnivore, a venture capital (VC) fund.

Kahn spoke to The Federal in a Zoom interview on the theme: ‘Are digital technologies changing Indian agriculture?’ 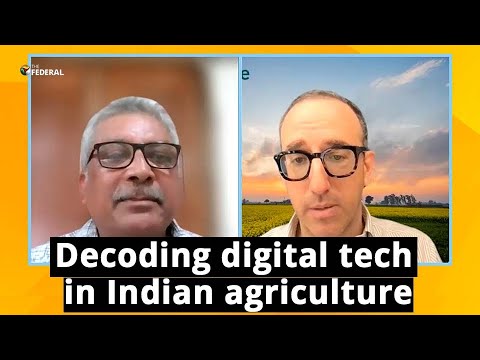 Omnivore is focussed on agri-tech and has been investing in Indian start-ups since 2012. It has a portfolio of 33 entities, in which it has invested about $90 million. These start-ups span six themes: financial technology (fintech), business-to-business marketplaces, consumer brands that address the farming community, post-harvest technologies and agricultural life sciences.

Private equity investors have taken quite a shine to online agricultural marketplaces. In the financial year 2021, they invested $318 million in the segment, about the same as in the previous financial year, according to a report by AgFunder, a VC firm.

There are online marketplaces like Bijak (Hindi for ‘invoice’), which provide a platform for retailers, traders and arhatiyas or commission agents to trade among themselves and traders who consistently abide by the terms of the contract get higher rankings – and customer preference.

These online marketplaces are not a replacement for regulated mandis, but are complementary to them, said Kahn. They operate in niche areas like fresh produce. They do not provide an alternative to e-NAM, which was launched by the Centre in April 2016. E-NAM was supposed to help farmers sell beyond their localities so that they could fetch better prices. But remote buying and selling requires grading and assaying facilities at the mandis, contract enforcement and efficient dispute settlement.

Some of the start-ups in Omnivore’s portfolio take the drudgery out of farming and strive to make it efficient, explained Kahn. Stellapps Technologies tries to improve milk productivity, quality and safety with devices on cows and cans and at collection centres, bulk chilling points and processing centres. CEO Ranjit Mukundan said readings thrown up by these devices helps in inseminating bovines at peak ovulation to minimise failed attempts. Sitting and standing patterns of crows throw up information for feed management.  Other prompts alert the managers about infections and the use of antibiotics. Instant fat analysers enable prompt and accurate payments to milk suppliers.  Kahn said Stellapps has moved from being a supplier of equipment to dairies to being an aggregator of dairies. It has become a milk supplier.

Vijayawada-based Eruvaka, however, continues to provide equipment for remote management of shrimp farms. Its focus remains IoT (internet of things) in aquaculture. Its main markets are outside India — in Southeast Asia and Latin America.

Among the more successful fintech companies is Arya Collateral Warehousing Services, which helps farmers get working capital against warehouse receipts. In August 2020, it launched a portal called A2ZGodaam.com which makes warehouses across the country discoverable (like Zomato, which apart from being a food delivery service is also a directory of restaurants).

According to Prasanna Rao, Managing Director and CEO, the warehouses are verified and certified by Arya. They are searchable across parameters like lease rental, insurance status, WDRA (Warehousing Development and Regulatory Authority) -accreditation, distance from regulated market yards or railway sidings, the availability of fumigation services and so on. The company has tied up with banks to provide financing against commodities stored in the warehouses.

Kahn said digital technologies are being adopted by horticultural farmers and those in the dairy, poultry and aquaculture sectors who have profitable operations and money to invest. Farmers engaged in broadacre crops like cereals, pulses and oilseeds are touched indirectly. The demand for precision agricultural equipment like soil moisture sensors is limited to horticultural farmers who use micro irrigation and are interested in conserving water. A start-up called Fasal has installed them on 40,000 acres, he said.

One area where there is frenetic VC activity in the US, the UK the Netherlands, Singapore and Israel is in agri-food life sciences. Start-ups engaged in developing innovative food and alternative proteins, novel farming systems or using transgenic and genome-editing technologies to develop plants with novel traits get a lot of funding.

Kahn said India’s contribution is negligible in this area. He said there was a dearth of talent. The doctorates in these disciplines go west like IT engineers used to at one time. To create an ecosystem for such enterprises, it was important for India to retain talent and make it attractive for non-resident agricultural life sciences scientists to return.