The BSE benchmark Sensex crashed by nearly 362 points on Tuesday due to an across-the-board sell-off, as financial sector woes, auto sales slump and weak macro data spooked investors. The NSE gauge Nifty too tanked 115 points to slip below the 11,400-level.

Yes Bank shares plummeted over 22 per cent, their fifth consecutive session of fall, as promoter Rana Kapoor and his group entities sold another 2.16 per cent stake worth Rs 510 crore.

Other major laggards were IndusInd Bank, SBI, Bharti Airtel, ONGC, Tata Steel and Reliance Industries — falling as much as 6.3 per cent. Of the 19 sectoral gauges compiled by the BSE, 17 closed in the red.

Analysts on the street said that a sense of caution prevails among investors amid a deepening crisis at Punjab and Maharashtra Co-operative Bank (PMC) and fraud allegations against companies like Indiabulls Housing Finance Ltd (IHFL).

The Mumbai Police on Monday (September 30) filed a case against the former bank management and promoters of real estate company Housing Development and Infrastructure Ltd (HDIL) in the PMC bank case and said a special investigation team will be probing the case.

A public sector bank that had considerable exposure to HDIL had filed bankruptcy proceedings for failing to repay loans. While the National Company Law Tribunal (NCLT) admitted the case for bankruptcy proceedings, HDIL moved the National Company Law Appellate Tribunal (NCLAT), challenging the order. On September 26, NCLAT ordered the resolution professional to not constitute the committee of creditors for HDIL till it hears the case again on November 13.

In the past one year, HDIL had been taking loans from PMC bank and was repaying the public sector banks which had moved the NCLT against the company. Last week, the Reserve Bank of India (RBI) appointed an administrator for the after its management confessed to having lent ₹6,500 crore or 73 per cent of its loan book to one customer.

The exposure was not reported to the RBI and was hidden from the regulator during its annual inspections, following which the RBI on September 23 imposed restrictions on PMC Bank citing “major financial irregularities, failure of internal control and systems.

According to a PTI release on Monday, the Mumbai Police had filed a First Information Report (FIR) against the promoters of HDIL — Sarang Wadhawan and Rakesh Kumar Wadhawan — and PMC’s former managing director Joy Thomas, for allegedly colluding to cheat the bank of up to ₹4,300 crore.

A confession letter dated September 21 written by the now-suspended MD of PMC bank has revealed that at least 21,049 dummy accounts were used by the bank to hide accumulated non-performing assets of HDIL.

The letter to RBI also revealed that the bank’s exposure to bankrupt HDIL has been pegged at ₹6,500 crore, which is almost three fourths of the bank’s total asset exposure.

Details about the fraud first emerged a few days ago after RBI took strict action against the bank and banned it from lending or accepting deposits for the next six months. It had  restricted withdrawal to ₹1,000 during the period, but later bumped it to ₹10,000 as thousands of panic-stricken customers of the bank protested.

There are rumours in some locations about certain banks including cooperative banks, resulting in anxiety among the depositors. RBI would like to assure the general public that Indian banking system is safe and stable and there is no need to panic on the basis of such rumours.

The revelation of details led to protests in Mumbai against the PMC bank and other protests against the RBI. The RBI also issued a statement dismissing rumours regarding the banking industry. 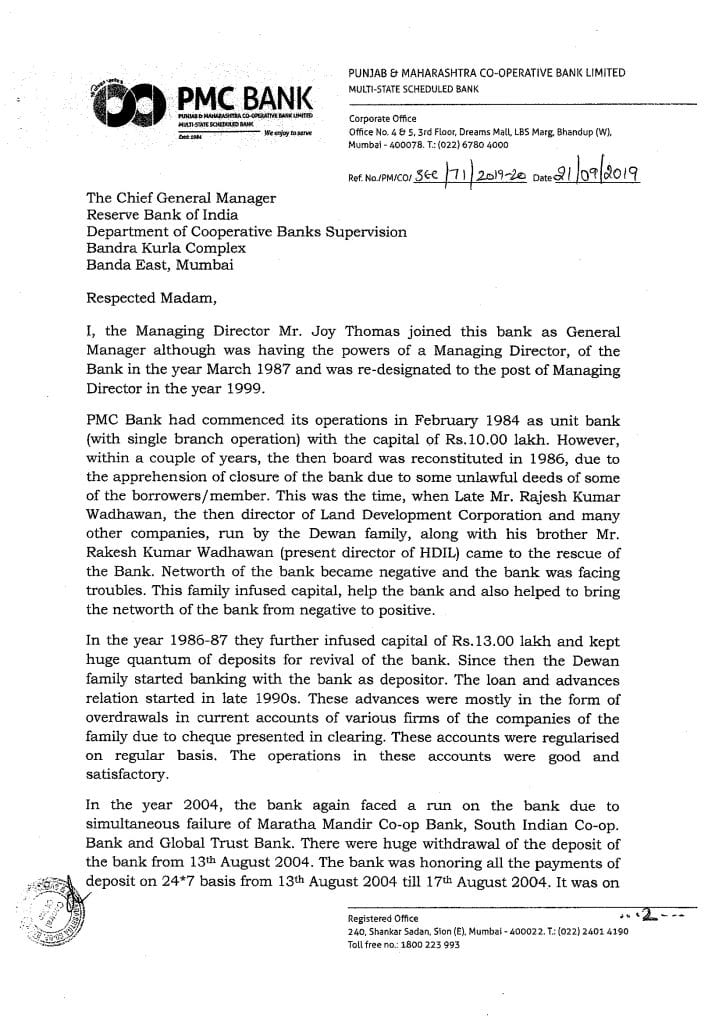 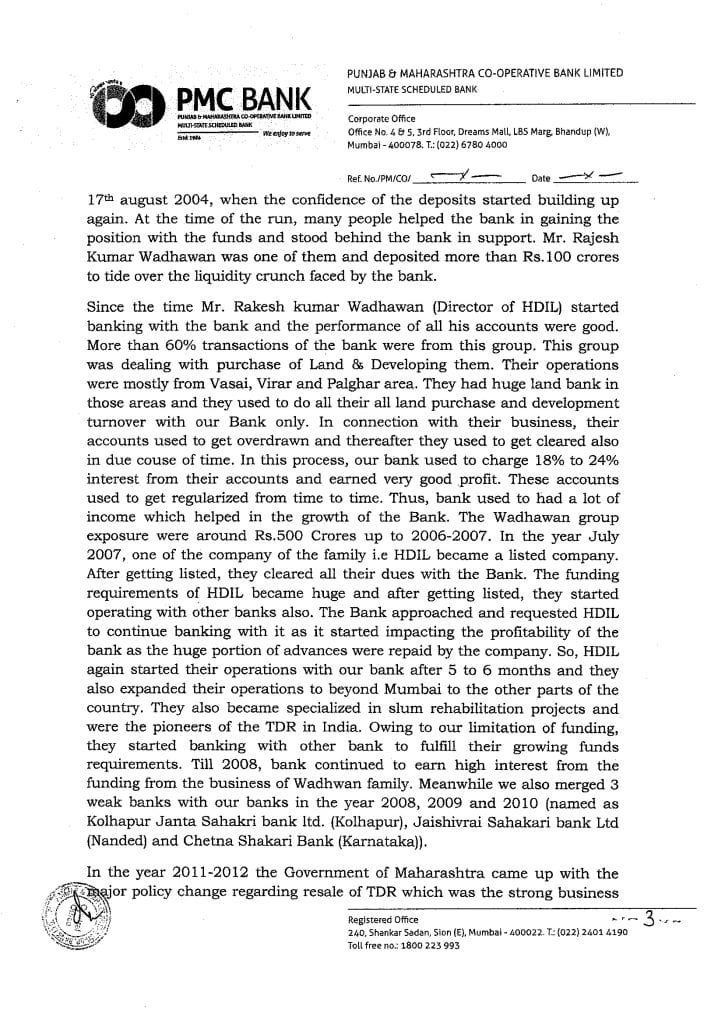 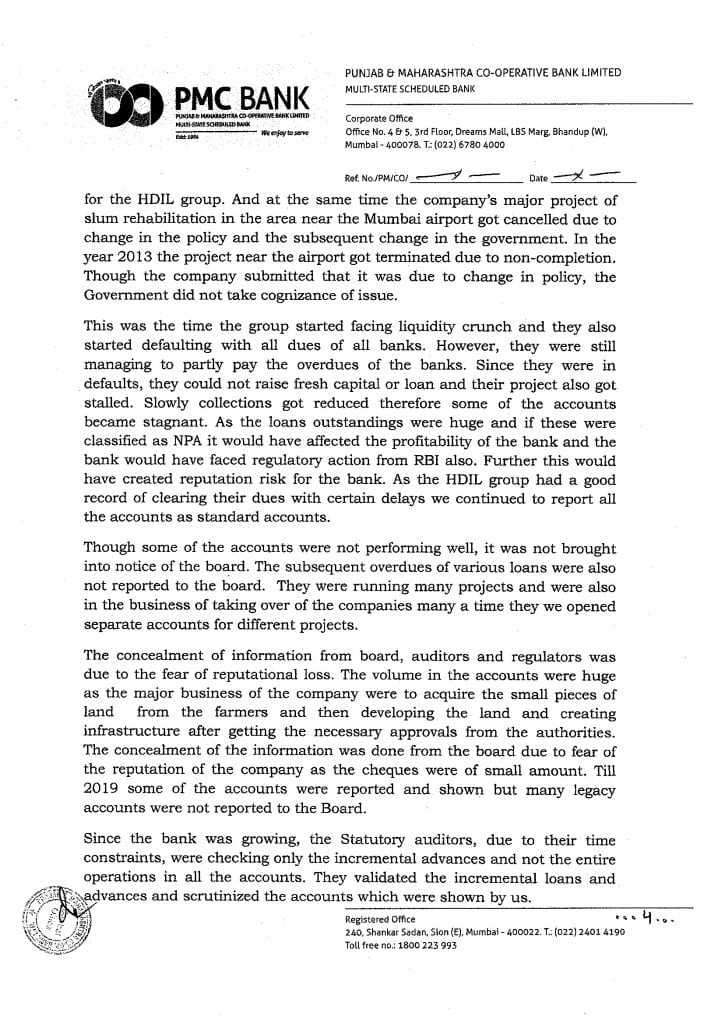 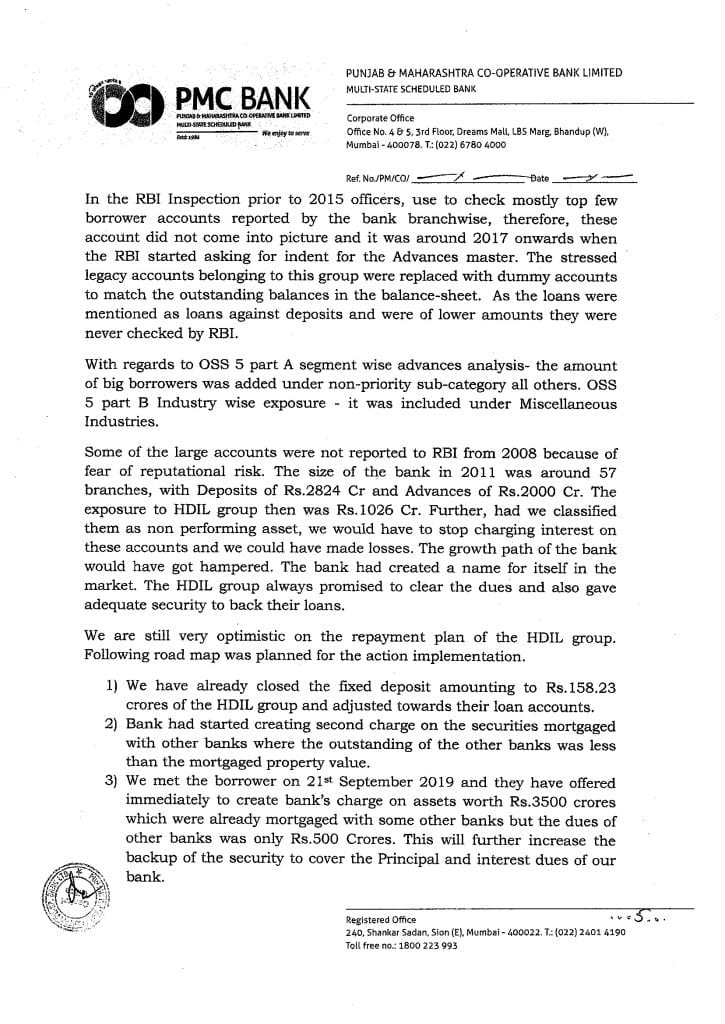 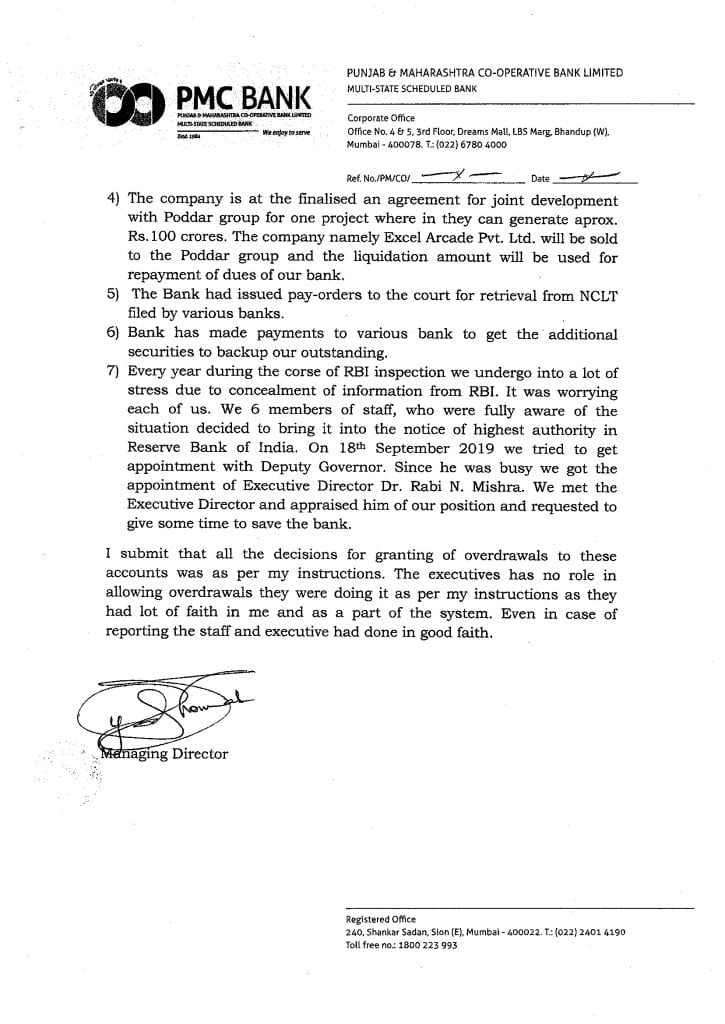